The Oregonian has a story about the decline in foster care numbers in that state – and how it’s not due to more child abuse supposedly being hidden due to COVID lockdowns.  On the contrary – what declined during the lockdowns were the false reports and the poverty cases.

“Even though we had fewer calls, the right calls were coming in and we got to the children who needed us,” the state’s Deputy Director of Child Welfare Practice and Programing, Lacey Andresen, told The Oregonian.

Indeed, Oregon’s experience is one more debunking of the whole racially-biased “pandemic of child abuse” myth.

According to the story, Oregon’s family policing agency, the Department of Human Services, is now tearing apart families an average of 208 times a month, down from 250 times a month before the pandemic. 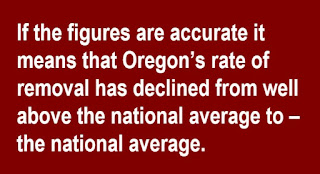 But the national average is, itself, way too high – since there are communities that have brought rates of removal far lower with no compromise of child safety.

Unfortunately, recent history suggests what will happen next.  Oregon’s Senator Soundbite will undermine it.

State Sen. Sara Gelser Blouin will find a horror story about a child left in a dangerous home – the same kind of horror story that has been happening all along, even as Oregon tore apart families at a rate far above the national average.

But because rates of removal are declining, precedent suggests Gelser Blouin will rush to scapegoat efforts to keep families together.  Her media acolytes will buy it immediately, and she’ll get lots of free publicity.  That will start a foster-care panic, another surge in needless removals of children.  The increase in removals will, in turn, restart – or accelerate -- the dumping of children into horrible placements.  Then Gelser Blouin will get herself another round of great press deploring the terrible placements – which will be due, in part, to the foster-care panic she helped to start.

Or maybe she’ll surprise everyone, rise to the occasion, truly put the children first and not do any of that.  It’s just that there’s so much precedent.  You can read all about Gelser Blouin’s track record here and about how she killed Oregon’s “differential response” initiative – even after an independent evaluation found it safe and effective – here.

So now that there are signs Oregon “child welfare” finally is making progress, two key questions remain: Will they keep it up?  Will they resist any politician’s effort to derail it?

Posted by National Coalition for Child Protection Reform at 7:51 AM