You get what you pay for: How Florida shifted funding priorities to foster care 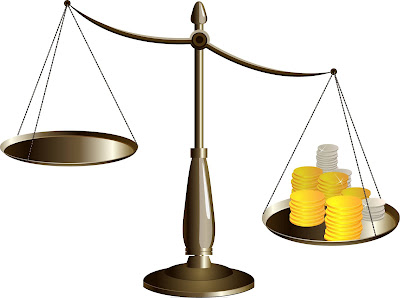 Child welfare’s foremost data nerd has weighed in on the mess in central Florida child welfare caused by – well caused by a lot of things, including the dreadful performance of Eckerd Connects.  Eckerd is the “lead agency” in the region (though not for long) under Florida’s largely privatized system of family policing.  (Florida calls it a “Community-Based Care” (CBC) system of “child welfare,” but both those terms are euphemisms.)

We wrote a detailed blog post about what went wrong last week.  Now there is a much more detailed post from Prof. Robert Latham, associate director of the University of Miami School of Law Children and Youth Law Clinic. He also has a degree in computer science and a talent for data visualization.  That makes him unafraid to go as deep into the weeds as necessary to determine whether a claim is true.

In his most recent blog post, he documents, in chart after chart, why the claim by Eckerd that its failures are due to the agency not getting enough money is b.s.  As the headline for the post puts it “CBC Funding Doesn’t Make Children Live in Offices.”

But there are some other significant observations.  Much as we did last week, Latham notes that

None of the problems are new, and every player in the saga had some hand in creating the mess. The [Pinellas County] sheriff, who is now saying Eckerd could be criminally liable, is the child protective investigator in Pinellas county and has been removing children (at higher than statewide average rates) and handing them to Eckerd for years despite all the known problems.

But he also explains how the Florida Legislature, the current administration of Gov. Ron DeSantis and the administration of former Governor Rick Scott skewed financial incentives for the “CBCs” toward holding more children in foster care and against trying to keep families together.

In other words, in addition to all the other ways Florida government caved-in to the Miami Herald and reporter Carol Marbin Miller’s crusade to tear apart more families, the governors and the Legislature also rewarded agencies like Eckerd for holding children in foster care and penalized them for working to keep them safely at home.

How the incentives work 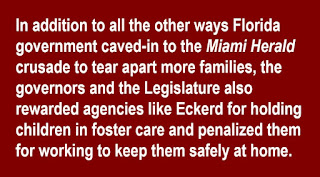 In 2010, back when Charlie Crist was still governor and the Florida Department of Children and Families had a visionary leader in George Sheldon, a small proportion of the complex formula for allocating funds to agencies such as Eckerd rewarded them if they reduced the number of children they trapped in foster care.  But by 2015, the year after Miller’s Innocents Lost series started a foster-care panic, that was gone.  Not only that, the proportion of the formula based on the number of children held in foster care doubled – from 30% of the formula to 60%.  It declined to 55% in 2018 – but it’s still, by far, the largest single driver of how much money Eckerd and its counterparts get.

That isn’t even the worst of it.  The formula for how much these agencies get is based in part on what the other CBCs are doing – apparently, it’s a little like grading on a curve.  But in this case, the better you do the worse the grade.

[I]f an agency holds its numbers steady while every other CBC increases theirs, that agency will lose money in the formula. There is no incentive to be the first agency to lower the numbers … There is, however, an incentive to be the first to raise your numbers in a given category and capture a higher proportion before the other agencies catch up. This could be a good or bad thing depending on the category and the cost of care for that group. [Emphasis in original]

In other words, if, say, a county sheriff is tearing apart families needlessly, a lead agency has no financial incentive to complain about it.  And they have no incentive to get children home as quickly and safely as possible.  In fact, if they do the right thing before anyone else, it’s great for the kids, but bad for the agency’s bottom line.

Any discussion of financial incentives is plagued with the same sorts of double standards that afflict any discussion in child welfare: tearing apart families is automatically considered the good, “safe” option, while avoiding the horrific trauma needless removal inflicts on children, and avoiding the high risk of abuse in foster care itself, is somehow deemed risky.

So you may be sure that were the legislature ever to restore even a slight incentive not to hold children needlessly in foster care, the Herald or the Tampa Bay Times would find the first available horror story and blame it on a supposedly dangerous incentive to return children home. 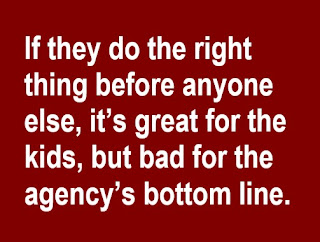 There are also huge incentives to prolong foster care beyond the financial: No caseworker wants to be on the front page of the Herald or the Tampa Bay Times, accused of “allowing” a child to die.  They need have no fear of being on the front page for tearing apart families needlessly.  The same dynamic applies to judges and agency administrators.

The bad financial incentives compound all that. Changing them would be a very small step toward redressing the imbalance and allowing the system to handle each case on its merits.

That this can be done in Florida is illustrated by what happened when Sheldon and before him Bob Butterworth ran DCF.  During their tenure a waiver from federal funding rules allowed more money to be used to keep families together.  Entries into foster care declined and independent monitors found no compromise of child safety.

Then the Miami Herald came along and blew the whole thing up.

Everything from the series of outstanding stories from the USA Today Florida Network, and the accounts of youth left to the tender mercies of Eckerd make clear the consequences.

Posted by National Coalition for Child Protection Reform at 2:37 AM