The foster-care panic that started sweeping through the state in 2019 continued in 2020 – and in much of the state, 2021.  In some regions the number of families torn apart has more than doubled since 2017.

When the federal government released its state-by-state figures on entries into foster care for Federal Fiscal Year 2020 there was good news in 47 states, Puerto Rico and Washington, D.C.  All of these places tore apart fewer families than they did in 2019.  In North Dakota entries were unchanged.  In Arkansas they increased by 1%.

And then there was Illinois.

At one time Illinois was, relatively speaking, a model for keeping children safely in their own homes.  Independent court monitors said so.

But budget cuts already were undermining the progress when, in April, 2019, a high-profile child abuse death combined with dreadful leadership from state government started a foster care panic – much like the one that tore apart countless families in the 1990s.  I wrote about both panics in this 2019 post.  By September of 2019 entries into foster care already had skyrocketed by 17%.  And by September 2020, even as almost every other state saw a reduction in the number of children torn from their homes, in Illinois the number increased by 17% yet again. 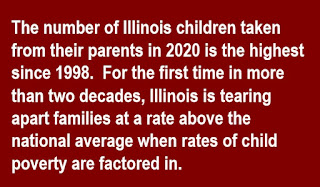 The number of Illinois children taken from their parents in 2020 is the highest since 1998.  For the first time in more than two decades, Illinois is tearing apart families at a rate above the national average when rates of child poverty are factored in.

According to the state’s own data, statewide things got no better in 2021.  The total number of entries into foster care is almost identical to 2020.  But that hides vast differences among regions.  In Cook County (metropolitan Chicago) removals fell back to their pre-panic levels.  But in the Northern and Southern Regions of Illinois, they continue to skyrocket.  Entries in these regions have more than doubled since 2017.

There probably are politicians who will try to spin this as something to celebrate – after all,  taking away vast numbers of children is bound to stop child abuse deaths, right?  Of course not.  That never happens.  Well, OK, maybe not stop them, but at least reduce the number a whole lot, right?  That never happens, either.

The same state report makes clear that, on the contrary, during the first year of the panic, 2019, such deaths skyrocketed. The number fell back in 2020.  But in 2020, there still were six more such deaths than in 2018 – before the panic.  We don’t know the 2021 figure yet because the cause of death is undetermined in many cases – but it looks as though that figure will be similar.

The reason this never works is something I explained in my earlier post about Illinois.  Child abuse deaths are as rare as they are tragic. They are needles in a haystack.  The blue circle is the “haystack” – the number of children who become known to the Illinois family policing agency, the Department of Children and Family Services (DCFS), in any given year.  The red line are all the needles in one place (which actually makes them easier to spot).  Can you see it?  Look closely. 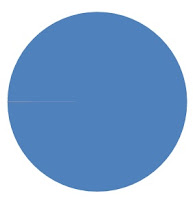 You’re never going to do a better job of finding the needles if you keep making the haystack bigger. But that’s exactly what Illinois politicians and DCFS leaders did.  (Full details on methods and sources are in the previous blog post.)

Bottom line Illinois pols and DCFS: you trashed a system that once was, relatively speaking, a leader.  You vastly increased the number of children subjected to the enormous emotional trauma of needless separation – in fact, when it comes to needless family separation you vastly outperformed Donald Trump.  You subjected all these children to the high risk of abuse in foster care itself.  You’ve even got children sleeping in offices again.

And all that did nothing – nothing – to prevent the very sorts of tragedies that prompted you to start this foster-care panic in the first place.

Posted by National Coalition for Child Protection Reform at 11:37 AM