Child welfare in Massachusetts: A commission report suffers from “The Mossaides Touch.” 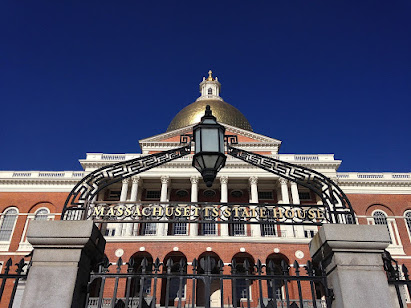 The Massachusetts Mandated Reporter Commission was chaired by, staffed by, and repeatedly mislead by the state’s “Child Advocate,” Maria Mossaides.  Despite the best efforts of dissenting commissioners, the Commission’s final report remains largely an exercise in misdirection.

Here, we single out an example worthy of Orwell: She turned an argument on behalf of doing more to protect the children of battered mothers from being thrown needlessly into foster care into an argument for doing nothing.

Over the past several months, I’ve written repeatedly about the Massachusetts Mandated Reporter Commission.  The Commission was chaired, and staffed, by the office of the Massachusetts “Child Advocate,” Maria Mossaides.  Mossaides has long been among the state’s foremost proponents of expanding the child welfare surveillance state and using what amounts to a “take the child and run” approach to child welfare.

Her strongest allies on the Commission were representatives from the agency that takes those children, the Massachusetts Department of Children and Families and its parent agency, the Executive Office of Health and Human Services.  They seem to believe that a state that already takes away children at a rate 60% above the national average still isn’t taking enough.

For more than a year, Mossaides made sure the Commission heard only those who shared her general outlook.  But then, after already drafting a series of proposed recommendations, the Commission finally held a public hearing.  At that hearing, commissioners finally heard the information Mossaides had kept from them for so long.  Several commission members said they were “shocked” “surprised’ and “taken aback.” 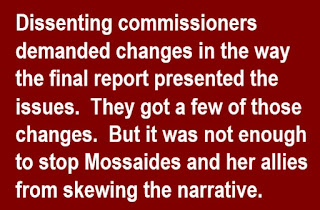 As a result, in its final report, the commission made no actual recommendations to the Massachusetts Legislature.  Dissenting commissioners demanded changes in the way the final report presented the issues.  They got a few of those changes, particularly in a preamble to the report.  But it was not enough to stop Mossaides and her allies from skewing the narrative in the 93-page final report to support the recommendations the commission would not actually make – and oppose one of the very few that might make things a little better.

NCCPR is preparing a detailed, page-by-page analysis of the document. But one application of what might be called “The Mossaides Touch” is so disturbing – and do cruel – that I’m highlighting it now.  That one statement effectively reverses the true meaning of public testimony, in order to advance the goals of Mossaides and her allies.  It concerns one of the biggest problems with mandatory child abuse reporting laws: The harm done to the children of battered mothers.

The issue in context

Let me start by recapping part of a previous post:

Of all the tragedies inflicted on children by the nation’s family policing agencies, few are worse than tearing a child away from a parent (usually a mother) whose only “crime” is to herself be a survivor of domestic violence.

All of the trauma for a child is compounded if the removal was for this reason.  One expert called it “tantamount to pouring salt into an open wound.”  He testified in a lawsuit that led to making the practice illegal in New York State. (NCCPR’s Vice President was co-counsel for plaintiffs.)  But, as I’ve often written before, in much of the country, family police agency policy on this issue boils down to “please pass the salt.”  That is certainly true in Massachusetts.  And the state family policing agency is fighting tooth and nail to keep things just the way they are.

As with so much that’s wrong in child welfare, the harm begins with mandatory reporting.  A battered woman works up the courage to break free from her abuser, often for the sake of the children.  But almost anywhere she turns for help, the helper is a “mandated reporter.”   Whether that reporter thinks it’s a good idea or is just afraid to do otherwise, the reporter may well call the family police.  If you want to know what happens next,  please take two minutes – just two minutes – to listen to this excerpt from the testimony of Western Massachusetts Attorney Michelle Lucier before a commission studying mandatory reporting in that state:

Then, for additional context, please read the testimony from Jane Doe, Inc, the Massachusetts Coalition Against Sexual Assault and Domestic Violence.  That will give a full understanding of how widespread the problem is – and how it places both battered women and their children in danger by deterring them from reaching out for help.  National research confirms it.

Turning testimony on its head

One of only three draft recommendations from the commission that actually would make things slightly better concerns this issue.  An earlier Commission document put it this way:

[P]ersons who provide direct confidential services to victims of domestic violence, sexual assault, or human trafficking should be excluded from mandated reporting responsibility. The reasoning behind the proposed exclusion is to reduce the barriers, or perceived barriers, in the way of persons who may be seeking immediate physical safety. Persons who seek physical safety are likely to be seeking to improve the safety situation for their children.

Jane Doe, Inc. and others who testified said this did not go nearly far enough – because battered women are likely to come into contact with so many other mandated reporters.

We appreciate the consideration of excluding sexual and domestic violence advocates from mandatory reporting requirements and recognize that this exclusion was considered to address the need to maintain relationships between these providers and survivors in their communities. However, these exemptions will not suffice.

During Commission deliberations, Mossaides and her allies made clear they opposed any exemption for any mandated reporter when a battered mother comes to that mandated reporter seeking help.  So now, behold how the Mossaides Touch stands the argument from Jane Doe, Inc. and others on its head – weaponizing it against the children of domestic violence victims.  According to the final report:

The Commission members expressed some opposing viewpoints on this proposal and Commission discussion ended by discussing that it is unlikely that such an exclusion would have the desired effect as victims of intimate partner violence, sexual assault, or human trafficking come into contact with many other mandated reporters besides those providing direct confidential services.

It's not clear when the Commission as a whole reached any such conclusion (I never heard them say such a thing, though I missed one meeting following the hearings.)

But more important, since the testimony at the hearing urged the commission to do more, not less, this sounds more like Mossaides misinterpreting the intent of public hearing speakers – in fact, turning that intent upside-down.

I heard no one at the hearing say that because giving battered mothers one or two people in whom they could confide without fear of triggering an automatic report to a child abuse hotline isn’t enough, it made more sense to continue to offer them none.

Rather, what groups such as Jane Doe, Inc. said is that this meager proposed exemption does not make up for the additional harm to battered mothers and their children that would result from enacting so many of the Commission’s other draft recommendations that would vastly expand who must report and what must be reported.

Though the report’s handling of the domestic violence issue is the most blatant example, it is the approach seen throughout what is technically a report from the Commission, but really a report from Maria Mossaides and her allies.

That’s not because they are ill-motivated.  It’s way worse than that.  They actually believe massive intrusion into families, especially poor families of color, protects children. (It doesn’t.) They see themselves as what their 19th Century predecessors proudly called themselves: “child savers.” That breeds an ends-justify-the-means mentality that’s been aptly described as “health terrorism.”

It would be far better if Mossaides and her allies were ill-motivated.  Then one could appeal to their consciences to get them to change.

Instead, thousands of children – especially poor children, children of color, and children of battered mothers – are paying the price for Maria Mossaides’ good intentions.

Posted by National Coalition for Child Protection Reform at 3:36 AM