Week in review special edition: Challenging the (mostly white) master narrative about child abuse and COVID-19. When will more journalists step up? 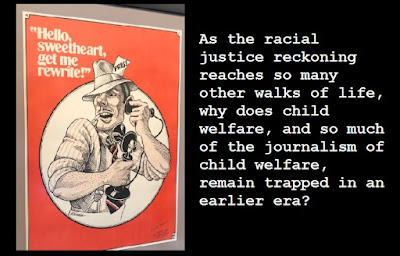 Scores of stories state as fact that the decrease in child abuse reports because COVID-19 has closed the schools is, as one reporter flatly declared, “bad news.”  But that is mostly the white view. In communities of color it’s often seen differently.  This week-in-review is devoted to the harm done by journalists when they buy into this master narrative, and the good they can do when they challenge it.

Consider the premise that underlies this narrative: Story after story accepts as fact the claim that now that so many white, middle-class professional "eyes" are averted from overwhelmingly poor disproportionately nonwhite children, their own parents will unleash upon them child abuse in "pandemic" or "epidemic" proportions. Multiple stories put it just that way.

It's one thing to tell readers about why some people think the stress of COVID-19 will cause some small number of parents to lash out - and why others disagree.  It's another thing to simply amplify the white "master narrative" about a "pandemic of child abuse" to the exclusion of all dissent.

How many journalists have stopped to so much as ask if the "pandemic of child abuse" claim is rooted in racialized fears and stereotypes?

What does it say about journalism – especially now - that so many reporters and editors assume only the white view is the right view?  As the racial justice reckoning reaches so many other walks of life, why does child welfare, and so much of the journalism of child welfare, remain trapped in an earlier era?

The exceptions illustrate the rule. Two stories, in particular, challenged this white master narrative during the past week.

● From Kendra Hurley’s story for Citylab:

Some parents living in neighborhoods with historically high rates of child welfare investigations say the dramatic dip in maltreatment reports feels more like the pollution lifting — a much-needed respite from the intense and relentless surveillance of low-income moms, and especially those who are black and Latinx. …

● From Eli Hager’s story in The Marshall Project:

"Poor people are usually constantly inspected by all these agencies,” [one mother] said. “Now there is kind of a peacefulness.”

As Emma Ketteringham of the Bronx Defenders told Hager:

We have a child welfare system that is particularly, extremely sensitive to the media, so we should be very sure of narratives before we put them out there.

More on this theme:

● From my op-ed column in the New York Daily News:

For families of color, agencies like New York City’s Administration for Children’s Services can be every bit as oppressive as the police, and even more powerful. Police can stop a black teenager on the street, throw him against a wall and frisk him. ACS can march right into the home, strip-search a black child and walk out with him, consigning the child to the chaos of foster care.

● From Prof. Martin Guggenheim of New York University School of Law (and President of NCCPR) in the Chronicle of Social Change:

[The so-called Adoption and Safe Families Act] has been responsible for the massive destruction of black and brown families. More than 2 million children’s parents’ rights have been terminated ... since ASFA was enacted. … It is an unpleasant truth that many of the organizations whose collective voice is condemning racist police practices now have for decades celebrated the approach enshrined in law by ASFA, some by explicitly celebrating adoption and others using the euphemism “permanency.”

I have some thoughts on that one as well.

● And consider the warning in the Chronicle of Social Change from Prof. Dorothy Roberts of the University of Pennsylvania Law School (also an NCCPR Board Member), who, when almost no one was talking about it, literally wrote the book on child welfare and race, Shattered Bonds: The Color of Child Welfare:

Prison abolitionists should support defunding the family regulation system and be careful not to enrich it more with funds divested from the police. Calls to divert money wholesale to federal and state health and human services departments, without exempting CPS and foster care, will further empower these engines of community surveillance and control.

● Still more calls for extending the abolition/defund movement to child welfare are in the video of this webinar from Black Lives Matter – LA.

● Another example of racism in child welfare: Blanket bans on visits between children in foster care and their parents.  Such bans are not necessary to curb the spread of COVID-19. Illinois has such a ban.  Here’s what Laura Matthews-Jolly, a lawyer who regularly represents children in child welfare cases wrote in The Chicago Tribune:

As a guardian ad litem, I represent children in foster care who have not visited with their parents since the ban took effect and can personally attest that denying meaningful contact between a child and parent is one of the most punitive acts a state can take. Separation from a parent, for whatever reason, can result in lifelong trauma.

● The challenges are not coming only from the Left.  In fact, even as many of my fellow liberals push Congress to spend up to $500 million more on the policing functions of child welfare, two Republican Senators and two conservative Democrats propose putting $800 million into better alternatives. Here’s the bill text.

● One reason challenging the white master narrative concerning child welfare and COVID-19 is so important: It’s already leading to appalling acts of racism such as this, from a hospital in New Mexico.

● Another reason: As I note on this blog, it can turn into a self-fulfilling prophecy.  In other words:

If you tell teachers over and over again that while their students were out of school, they were abused in pandemic proportions, then the bruise that last year would have been seen for what it was, an accident, suddenly is child abuse.  The hungry child for whom they might have called a food bank now becomes a call to child protective services.

The “pandemic of child abuse” narrative is only the most recent example of the white narrative being assumed correct among journalists who cover child welfare.  The problems go much deeper and have been around for much longer.

The journalism of child welfare needs a reckoning all its own.
Posted by National Coalition for Child Protection Reform at 11:00 PM