About a year ago, Late Night with Seth Myers produced a parody called White Savior: The Movie Trailer.  I’ve cued the video to the part that the producers of public radio’s Fresh Air need to see most (though there might be an ad first):

They need to see that because, in what has to win some kind of award for tone deafness, Terry Gross and her producers at WHYY Public Radio, where Fresh Air is produced for NPR, chose this moment – this moment - to showcase a real-life white mother's narrative about the joys of transracial adoption.

Here’s the description of the June 18 program on the NPR website:

(I am not linking to it or naming the blogger because she’s plugging a book about her life raising these children, and I’d rather not help promote it. The transcript is easy to find online.)

One of the Black children was adopted, as a baby, from foster care.

I guess there’s nothing like exercising white privilege to help you learn about it.  And who knew that the job of Black children was to teach their white adoptive parents?

What follows is 37 minutes of humblebragging from this white adoptive parent about things like how her children absolutely do not have to be grateful to her, she hates savior narratives and she learned how much easier it is for a white person to buy shampoo.

I’m not going to go into detail because the issue here is not transracial adoption.*  Nor do I want to suggest that the blogger is not a fine parent who cares about racial justice. The problem isn’t the blogger. The problem is Fresh Air and the tone-deafness of its producers. 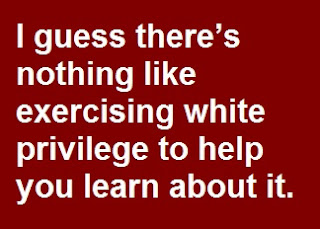 As far as I can tell, in its decades on the air, Fresh Air has never taken a serious look at the harm the foster care system does to children of color – or any children for that matter.  In this moment when we may finally be coming to grips with racism in all walks of life, here are some of the things Fresh Air could have done – but didn’t:

● They could have interviewed Prof. Dorothy Roberts of the University of Pennsylvania Law School and author of Shattered Bonds: The Color of Child Welfare, about the havoc child protective services – the child abuse police -- wreak not only in Black families but entire Black communities. (Prof. Roberts is a member of NCCPR’s volunteer Board of Directors.)

● They could have interviewed leaders of the Movement for Family Power about their calls to expand the narrative about defunding and abolition from police to include the child welfare system.

● They could have talked to people in communities of color across the country whose view of child protective services is vastly different from the narrative among the white professional elite – the way Kendra Hurley did for Citylab and Eli Hager did for The Marshall Project.

● They could have talked to Stephanie Clifford and Jessica Silver-Greenberg of The New York Times about their landmark 2017 story: “Foster Care as Punishment: The New Reality of ‘Jane Crow’”

Fresh Air did none of these things.

It is one more example of the extent to which the racial justice reckoning has yet to reach child welfare – or the journalism of child welfare.

● We stopped taking so many Black children needlessly in the first place.
● We fully embraced kinship guardianship, often a preferred approach to permanence for Black families.
● Agencies got serious about finding adoptive parents in Black communities.

Needless to say, none of that was discussed on Fresh Air.