Child welfare and COVID-19: If there’s a surge in foster care, it won’t be because of actual child abuse, it will be a self-fulfilling prophecy

That makes the heartfelt response to the fearmongering from a top child welfare official even more important. 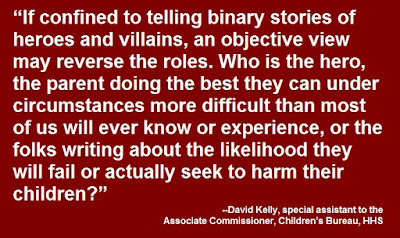 I have previously noted some of the problems with the whole notion that because mostly white, middle-class professional “eyes” no longer are gazing upon overwhelmingly poor disproportionately nonwhite children, there is now underway a “pandemic of child abuse” at the hands of their parents.  Among the problems with this claim: It’s racist.

There is also another danger that hasn’t gotten enough attention: self-fulfilling prophecy.

The fearmongering stories often are followed by a prediction that, once schools reopen and the army of “mandated reporters” is back in action, there will be a big increase in foster care placements as soon as they spot all that supposedly previously-hidden child abuse.

But if you tell teachers over and over again that while their students were out of school, they were abused in pandemic proportions, then the bruise that last year would have been seen for what it was, an accident, suddenly is child abuse.  The hungry child for whom they might have called a food bank now becomes a call to child protective services. 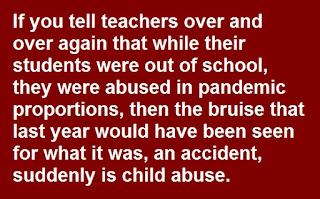 The coming surge in foster care placements, if there is one, will be no exception.

That’s why it’s more important than ever to heed the words of David Kelly, special assistant to the Associate Commissioner of the Children’s Bureau in the Department of Health and Human Services.  In this time of reckoning for all walks of life, Kelly’s words deserve the attention not only of everyone in child welfare, but perhaps even more from journalists.

I hope you’ll read his entire column in the  Chronicle of Social Change. I’m going to highlight some of it here:

There remains a deep-seeded distrust and lack of faith in the poor families and families of color that disproportionality populate the child welfare system. It may not be as blatantly visible in all places and all times as it has been historically and can be quite implicit, but it is there just below the surface, insidious.

We need look no further than the daily features in newspapers across the country in recent weeks forecasting spikes in child maltreatment. Words typically used to describe natural disasters and war, such as surge and tsunami, describe what we should expect. Concerns about declines in reporting and leaps to grim conclusions abound. …

If we take a rational look at what we know, there is good cause to question the legitimacy of the alarmism. … 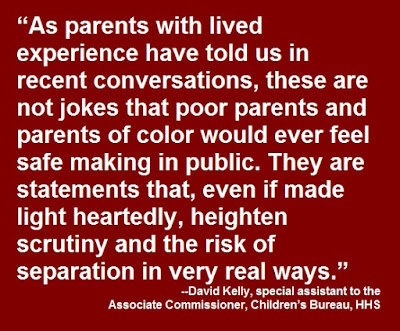 Several commentators have pointed to the prevalence of parents joking about losing patience with children and restraining them or parents calming their nerves with adult beverages or substances—or even allowing kids to use them. These are deeply troubling images that mock lack of parental supports, resiliency, and protective capacity in times of deep stress, regardless of one's income level.

While there is value in discussing shared experiences and challenges, there is also a stark double standard on display. As parents with lived experience have told us in recent conversations, these are not jokes that poor parents and parents of color would ever feel safe making in public. They are statements that, even if made light heartedly, heighten scrutiny and the risk of separation in very real ways.

I particularly hope journalists will consider this:

If confined to telling binary stories of heroes and villains, an objective view may reverse the roles. Who is the hero, the parent doing the best they can under circumstances more difficult than most of us will ever know or experience, or the folks writing about the likelihood they will fail or actually seek to harm their children?

I also hope they will take time to question their assumptions and see how all this looks in communities of color, as Kendra Hurley did in this excellent story for CityLab and Eli Hager did for The Marshall Project.
Posted by National Coalition for Child Protection Reform at 10:59 PM