● The Movement for Family Power has released an outstanding report at exactly the time it’s needed most. It’s called: Whatever they do, I’m her comfort, I’m her protector: How the foster system has become ground zero for the US drug war. They have video of a webinar discussing the report and the issues it raises on their Facebook page. 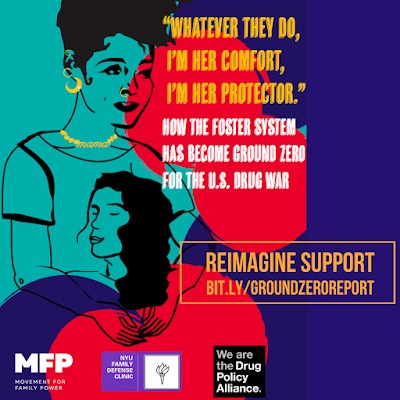 ● MFP writes that "This report is in part a plea to the social justice community to embrace activism against the foster system as a core social justice cause of our time."  There are signs that this is starting to happen. Check out the New York Daily News story about this protest.

● The critique isn’t coming only from the Left. The right-leading Texas Public Policy Foundation just released Punished for Being Poor: The Relationship Between Poverty and Neglect in Texas.

● And for an urgent example of why the reforms recommended in both reports are needed, check out this story from Texas by Roxanna Asgarian for the Chronicle of Social Change.

● While the social justice community is starting to mobilize, the child welfare establishment continues to offer, at best, lip service. Although a New York Times headline said  “Calls for Racial Justice Touch Seemingly Every Aspect of American Life” I explain in this NCCPR Blog post why it should have said: Every Aspect But One.

● Last week’s week-in-review was devoted largely to how the racial justice reckoning had yet to reach the journalism of child welfare.  This week: Why the award for tone deafness goes to the public radio program Fresh Air.

● The Center for the Study of Social Policy is leading a new initiative that “works to create a society in which the forcible separation of children from their parents is no longer an acceptable intervention for families in need.” And while other child welfare organizations belong in a hypocrisy hall of fame, CSSP has a good track record on issues of child welfare and race. In the Chronicle of Social Change, leaders of the effort write:

The harm that results from [child protective services] intervention, and the families that are destroyed as a result, will only end through the abolition of the child welfare system as we know it and a fundamental reimagining of the meaning of child welfare – a reimagining that is fundamentally anti-racist.

● Also in the Chronicle, Prof. Vivek Sankaran, director of the Child Advocacy Law Clinic and the Child Welfare Appellate Clinic at the University of Michigan Law School reminds us that With Child Welfare, Racism Is Hiding in The Discretion. He writes:

My first client as a family defense lawyer was a Black mother who left her 13-year-old in charge of 8- and 6-year-old siblings while she went to the dry cleaners.  In suburban America, we call this babysitting. In a predominately Black, public housing complex in Washington, D.C., this constituted neglect.

I still remember the terror in my client’s voice. “They are coming to take my babies.”

“They” weren’t the police. They were child protective services — an agency every bit as powerful and as susceptible to racism as the police. But we have yet to face up to the racism that destroys thousands of families of color every year.

A Michigan parent on Thursday became the state’s first to successfully appeal a judge’s decision to remove a child into foster care, a ruling that the family’s advocates hailed as “an important first step” toward ensuring that judges don’t put families through the trauma of separation without showing sufficient cause.

Please let that part about “first to successfully appeal” sink in – and remember it the next time some foster care apologist hands you a line of bull about checks and balances and how “we can’t take children on our own, a judge has to approve everything we do.”

There were other legal victories over the past week:

● In Kentucky, the Northern Kentucky Tribune reports, a parent won a victory in an ongoing lawsuit challenging coerced “safety plans” in which parents are forced to surrender all their due process rights, and sign onerous “voluntary” agreements to submit to a cruel surveillance regime. If they don’t the state says it will take the children. It’s at least the second such case in Kentucky.

● And in western Pennsylvania, a similar suit is moving forward.

● Meanwhile, Rise reminds us that COVID-19 has not gone away, and issues another challenge to the racist narrative that suggests the absence of mandated reporters calling in anything and everything has unleashed a pandemic of child abuse.