UPDATE, MAY 23: The Chronicle of Social Change has grim new details: Family defender S. Annie Chung told the Chronicle that the office building "has no laundry facilities, no full kitchen, no full bathrooms." The youth are sleeping on cots and sleeping bags in the building basement, which had been used for supervised vists.

Four Washington State foster youth who tested positive for COVID-19 were yanked out of their placements and institutionalized in a makeshift shelter, apparently in a child welfare agency office building, the NCCPR Child Welfare Blog has learned.  Like all Washington State foster children, they are not allowed in-person visits with their families.

It happened just days after the Washington State Department of Children, Youth and Families said such facilities were merely being contemplated.

Word of the plans leaked out, via a job posting on May 8. Three days later, DCYF issued a “clarification”, declaring that the sites mentioned in the job posting were merely “potential locations in the community where we could house children in our legal care and authority who’ve tested positive for COVID-19 in the event a placement home was not available.”

But things moved quickly from consideration to reality.  In response to emailed questions, DCYF Communications Director Debra Johnson confirmed to NCCPR that, as of May 21, four young people were institutionalized in such a facility.  UPDATE: But, as of that date, we could find nothing on the DCYF website updating the earlier "clarification."

The job posting listed three possible sites for institutionalizing COVID-19 positive foster youth: a summer camp, a church and one of DCYF’s own office buildings in Seattle. Johnson did not say which facility is being used, but the summer camp said it has no intention of being used for that purpose. The church says it is willing, but no such placements have been made yet. So that leaves the office building. UPDATE: The Chronicle of Social Change story confirms it's the office building.

It never had to happen

The move is still another example of the cruelty of Washington State DCYF.  In a previous post we discussed how DCYF cut off all in-person visits between foster children and their parents in order to pander to some of the state’s worst foster parents.

Now, consider what DCYF has done to these four children and may do to many more: 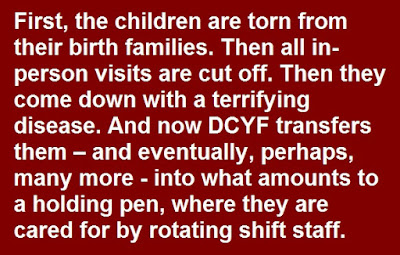 First, the children are torn from their birth families. Then all in-person visits are cut off. Then they come down with a terrifying disease. And now DCYF transfers them – and eventually, perhaps many more - into what amounts to a holding pen, where they are cared for by rotating shift staff.

And it’s not even a licensed holding pen.  In the email, Johnson said that “children are temporarily being supervised by agency staff and therefore the facility does not require licensure.”

The children were institutionalized because, Johnson says:

In all cases, DCYF follows recommendations about sheltering in place procedures for children who are COVID-19 positive. If children can be sheltered in place in their current out-of-home placement, we do so at the direction of health care authorities.  In some circumstances, caregivers may be unable to continue to care for children placed with them. This is the reason the four COVID-19 positive children are currently receiving care at the identified site.  [Emphasis added]


Perhaps for now the operative word is “unable.” But what about when foster parents are simply unwilling? Given the cruelty of some Washington State foster parents, and DCYF’s willingness to do handstands to pander to them, will these makeshift institutions become dumping grounds for foster parents who decide to get rid of their foster children because the children have COVID-19?

Ideally, of course, DCYF would have determined that these four COVID-19 positive children could simply go home. But let’s give DCYF the benefit of the doubt and assume that, in these particular cases, that really would be unsafe.  That still doesn’t mean a holding pen was necessary.

Somewhere in Washington State, you may be sure, there are four foster children who can go home. In fact, there are many, many more than that.  And you may be sure that once all those children went home, at least some of those foster parents would be loving and caring enough to take in those four youth with COVID-19.

But Washington State child welfare doesn’t work that way. They don’t even think that way.

A note about terminology

You may be sure that DCYF will be oh, so upset about terms such as “holding pen” and and “warehousing.”  But when you temporarily confine children in an office building from which they cannot leave for weeks because they have an illness, and leave them to be cared for by shift staff instead of a family, that is warehousing. And while the place where they are kept may turn out to be a very pretty holding pen, it’s still a holding pen.

Posted by National Coalition for Child Protection Reform at 8:00 AM