Too bad it took a pandemic before they figured it out.

The Milwaukee Journal Sentinel published a story Thursday about child abuse and COVID-19. Much of it was the usual fearmongering – complete with the unacknowledged racial bias that underlies the assumptions.  They even quoted someone from Children’s Hospital of Wisconsin – a place so prone to see child abuse where it isn’t that some of their own doctors are afraid to send their own children there if those children suffer an accidental injury.

But one part was a little different.  It concerned a so-called “Child Advocacy Center.”  In what authorities believe to be the most serious cases of alleged physical and sexual abuse, children sometimes are taken to such centers to be interviewed.  At their best, such places reduce the trauma of investigation for children.  At their worst, they spread paranoia and impede real solutions. 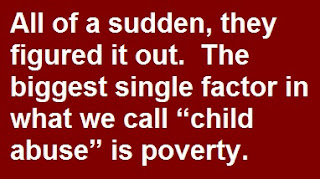 But for one such center, the COVID-19 pandemic apparently has been a revelation: All of a sudden, they figured it out.  The biggest single factor in what we call “child abuse” is poverty. The stress of poverty is the major factor leading a very small minority of parents to lash out against their children.  And to a much greater degree, poverty itself is confused with neglect.

Apparently the folks at the Marshfield Child Advocacy Center figured this out because they had nothing better to do.  With fewer mandated reporters – from places like schools and, of course, Children’s Hospital of Wisconsin – calling in anything and everything to child abuse hotlines, the staff had time to think things through. And they made good use of that time.  According to the story:

“[T]he staff pivoted to prevention within a week of the stay-at-home order, said director Kristen Iniguez. They recognized that if parents can’t meet their family’s basic needs, stress can cause them to respond to kids in unhealthy ways.

“To support those basic needs is to ideally prevent child abuse, emotional abuse and neglect of children in this lockdown situation,” said Iniguez, a physician.

As I’ve noted previously, the scientific term for this sort of revelation is: “Duh.”

[T]he center teamed up with other service providers. For example, school districts are providing lunches for families to pick up. For those without transportation, the center's staffers are dropping off the food. They are also delivering groceries and connecting families with emergency financial support to help with rent, electricity and cellphone bills.

All of which leads to two questions: 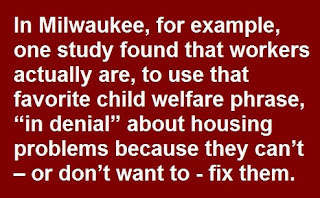 Families needed food and emergency financial support – and they were losing their children to foster care for the lack of it – long before COVID-19.  In Milwaukee, for example, one study found that workers actually are, to use that favorite child welfare phrase, “in denial” about housing problems because they can’t – or don’t want to - fix them.  What were the good people at the Marshfield Child Advocacy Center doing about it then?

2.      What happens after the pandemic abates?

Will it be back to the take-the-child-and-run approach, or will any real lessons be learned?

That’s also a good question for Emilie Amundson who runs the Wisconsin Department of Children and Families.  Again, from the story:

Amundson hopes some things may change for the better. By the time the coronavirus crisis is over, she said, perhaps her agency will be viewed as a resource for families rather than a source of fear.

“We’re in the midst of a real sea change,” she said. “We have an opportunity through COVID … to de-stigmatize what Child Protective Services has been in the past and make it a place where people can go to get the help they need.”

I have no reason to believe Amundson is not sincere.  But the sea change can’t happen as long as the child welfare system is structured as it is today.  Child Protective Services workers can traumatize children with needless investigations, stripsearch them, consign them to the chaos of foster care and deprive them of their parents forever.  In Wisconsin, such agencies tear apart families at a rate more than 30 percent above the national average.

An impoverished parent dare not reach out to that agency for help in a crisis. It’s not that reaching out that way would never lead to a good result – but it’s like playing Russian Roulette with their children.  Even the decision whether to seek help from professionals who are “mandated reporters” has to be weighed with care.  Whether the family gets help or the child must endure foster care depends on the attitude of the mandated reporter, the culture of the agency, whether there’s been a high-profile child abuse tragedy in the news, which caseworker shows up at the door and what mood s/he’s in.

Even now, during the pandemic, accepting help can be risky. Remember those food deliveries Dr. Iniguez mentioned?  In Nevada one of those making the deliveries is using them as an opportunity to spy on families.  In Pennsylvania, an advocate urges using video chats with children as a means of spying – and the state human services secretary says you should then call the hotline based on your “intuition.”

If Amundson really wants that sea change, here’s what has to change: Help to ameliorate the worst aspects of poverty must be made readily available to families without having to go through an agency that can take away their children.  And the people who work for those helping agencies must be exempted from mandatory reporting laws. (That doesn’t mean they’d be barred from calling a hotline if they saw real abuse, they just wouldn’t be under enormous pressure to report anything and everything.)

Even that may not be enough.  Mandatory reporting was put in place more than half a century ago with no testing beforehand – no studies to see if it would work. The most recent research says it’s backfiring.

If Wisconsin, or any other state, really wants to reduce child abuse, and if we really want COVID-19 to lead to any sort of change for the better, child welfare systems need to rethink the entire child welfare surveillance state, beginning with the abolition of mandatory reporting.
Posted by National Coalition for Child Protection Reform at 11:00 PM