“The Donald Trump of L.A. Law Enforcement” has a plan

UPDATE, MAY 14, 2020: To its credit, the Los Angeles County Department of Children and Family Services objected to the scheme and the sheriff has asked that it be "reconsidered."

You’re doing everything you’re supposed to do to stay safe during the pandemic: strictly observing social distancing; only going out when absolutely necessary.  Then there’s a knock at your door.  Of course you’re not going to open the door and put everyone at risk, are you?

But wait. This time the guy on the other side of the door is wearing a uniform and a badge and carrying a gun. He’s a sheriff’s deputy.  He wants to do a “welfare check” to see how the kids are doing.  No one has so much as accused you of abusing or neglecting your children – but the Sheriff’s office decided, after consulting with the local child welfare agency, that you just might.

Now what do you do? Let him in and put everyone at higher risk of COVID-19, as this stranger who’s been who-knows-where-else checks all around the house? Or say no and risk him deciding that makes you a child abuser - and coming back with a court order to take the kids? (Or maybe he won’t even wait for the court order.)

Child welfare’s response to COVID-19 is a microcosm of child welfare in general: It flunks the balance-of-harms test.  And as is often the case, when much of the country performs badly, Los Angeles County looks for new ways to perform worse. 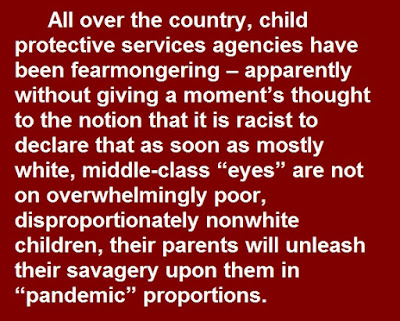 All over the country, child protective services agencies have been fearmongering – apparently without giving a moment’s thought to the notion that it is racist to declare that as soon as mostly white, middle-class “eyes” are not on overwhelmingly poor, disproportionately nonwhite children, their parents will unleash their savagery upon them in “pandemic” proportions.

But while other states and localities have confined themselves to urging everyone to spy on their neighbors and turn them in to hotlines, Los Angeles County Sheriff Alex Villanueva doesn’t want to wait for hotline calls.

According to a breathless story in the Los Angeles Times:

In response to the drop in abuse reports, Villanueva said he is launching a plan “to do welfare checks on our most at-risk kids with patrol personnel.” He said he is working with the Special Victims Unit, the Department of Children and Family Services and other stakeholders to develop a way to identify high-risk minors who may not have contact with their schools and then have patrol deputies do some form of a welfare check.

There is no explanation of how the Sheriff will decide who is “high risk” – but I’m guessing that there won’t be many deputies sent to make random checks in Beverly Hills.

It is not clear whether the Department of Children and Family Services will go along with this scheme – and they’d probably have to agree for it to work, since they’d be the ones deciding who is “high risk.” But DCFS director Bobby Cagle has done the usual call-in-anything-and- everything fearmongering, and his track record is not encouraging.


In the end, DCFS decided that sending a uniformed law enforcement officer to a family’s home without any articulable suspicion of child abuse or neglect would not necessarily improve safety for children.  To the contrary, such an action might increase stress on families and children, especially those in already marginalized communities, during one of the most stressful times most have ever experienced.

Other advocates also objected and the sheriff has now asked that the proposal be "reconsidered."

That may have come as a surprise to Richard Winton, the Times, its reporter who has covered the sheriff's scheme.  When the sheriff first announced it,] Winton bought the whole party line.  In a style more suited to Fox News or the New York Post, Winton wrote that

Eagle-eyed teachers, doctors, dentists, counselors, coaches — an army of mandated reporters across California — along with security guards, janitors and observant parents typically fill the hotline with reports of suspected child abuse or neglect. Those calls, investigators say, often save lives. 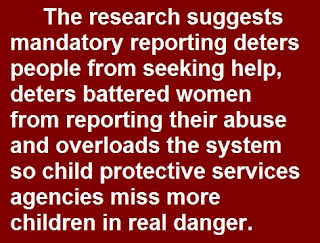 There are a number of problems with this:

● The “army” is an army of conscripts. Some of the “soldiers” have realized they’re doing harm, and are calling for an end to mandatory reporting.

● As for saving lives, that’s possible. But it’s more likely that mandated reporting has cost even more lives.

Mandatory reporting was put in place decades ago with no evidence it would work.  By 1998 the National Research Council had concluded there is, in fact, no evidence it makes children safer. More recent research suggests it makes children less safe.  The research suggests mandatory reporting deters people from seeking help, deters battered women from reporting their abuse and overloads the system so child protective services agencies miss more children in real danger.

He even used the wrong horror stories

The sheriff appears oblivious to the irony of  invoking the names of the children in two high-profile child abuse tragedies Gabriel Fernandez and Anthony Avalos. Those deaths had nothing to do with a lack of mandated reports – they had to do with failure to follow up on the reports, quite possibly because the system was so overloaded.   Nationwide, 97 percent of calls to hotlines are either screened out, false reports or neglect cases.  By overloading systems with all those false reports and cases that often involve poverty, workers have less time to find the other three percent. 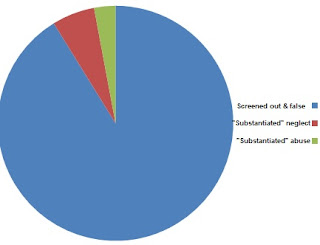 Here’s how Prof. Jane Spinak of Columbia University Law School put it in a just-published paper (available as Chapter 7, here).

First, it is clear that the vast majority of reports do not result in state action because a child has been mistreated; there is a lot of noise in reporting. Hunches, vague suspicions, better-safe-than-sorry beliefs, passing the buck to someone else instead of figuring out how to be helpful, anonymous calls and instances of malicious false reporting still require state investigations that cost time and money.

Reducing those types of reports because children are not as casually observed will reduce unnecessary family disruption and trauma and will give investigators more time to scrutinize when children are actually in danger, usually of serious physical or sexual abuse.

Fewer reports based on unsubstantiated feelings and just passing the buck will also mean workers will have to do fewer in-person investigations, leaving them and the families they are investigating less exposed to COVID-19.

So if anything, fewer junk reports might leave workers more time to find the next Gabriel or the next Anthony.  The retreat of the “army” of mandated reporters might make children safer.

The sheriff’s own department needs attention …

The Los Angeles Times story describes Villanueva as someone “who spent years working the streets and is a veteran of child abuse and neglect investigations.”

But there may be a bit more to him. Indeed, given his profound concern about violence, Villanueva, dubbed by Los Angeles Magazine, “The Donald Trump of LA Law Enforcement,” might want to focus more closely on his own department.

As for the story itself, how does Winton know if those teachers, dentists and janitors are  “eagle eyed” and not simply calling in CYA reports to protect themselves?  Has he checked their eyesight?  Has he watched the “army” drill and checked their training?  Clearly, the story could have used a better editor; in particular a certain legendary Los Angeles city editor – literally legendary, since he was a work of fiction:

The analogy isn’t perfect, of course. In the clip, the lead that went beyond the facts was for a story about police misconduct.  In the L.A. Times, the florid prose is in the service of a worshipful view of “law enforcement,” whether it’s the sheriff or the so-called “eagle-eyed … army...”  (Or, for those who have seen the episode, the Times story combines the prose style of Rossi with the attitude of Driscoll.)

Bad ideas like Villanueva’s – and the way they are covered in newspapers like the Times - are the harvest we’ve reaped from decades of hype and hysteria persuading us that there is a child abuser under every bed.  COVID-19 makes it all worse.
Posted by National Coalition for Child Protection Reform at 11:00 PM