Child welfare in Kansas: They’ve been knocking on doors for nearly 30 years. Maybe someone is starting to listen.


The first time I heard from a grassroots group of parents fighting for their children against the child welfare system in Kansas it was 1990 – shortly after my book, Wounded Innocents, was published.

Any such group has all sorts of strikes against it from the start: Most of the members will be poor – because that’s who is targeted by child protective services agencies – so they won’t have much in the way of resources.  Most have watched their children endure the trauma of needless foster care.  And then, when they organize, they are demonized; viewed at best as sick and at worst as evil.

So after several years, the members can’t keep up the fight anymore.  Then, perhaps a few years later, a new group forms and the pattern repeats.

That’s because among those who view them as sick and/or evil are many in the state’s media. For example, they have faced only contempt from the largest newspaper in the state, the Wichita Eagle. 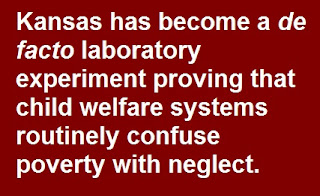 But last week, when parents organized and picketed outside the State Capitol in Topeka, something heartening happened: They were treated with respect by the reporter who wrote this story; Peggy Lowe of public radio station KCUR.  Perhaps that’s because Lowe has partnered with Sherman Smith of the Topeka Capital-Journal to take a careful in-depth look at what happens to children after they are taken.

It also may be because Kansas has become a de facto laboratory experiment proving that child welfare systems routinely confuse poverty with neglect.  As Lowe and Smith explain:

A University of Kansas study found that was not a coincidence.  That is in line with multiple studies suggesting a good solution: When you increase cash assistance to poor families, what the child welfare system calls “neglect” declines.

How the system hurts children

● It hurts children needlessly removed by inflicting upon them the same enormous emotional trauma felt by children separated at the Mexican border.  So it’s no wonder study after study of typical cases finds that children left in their own homes fare better even than comparably-maltreated children placed in foster care.

● But even that isn’t the worst of it.  The more that workers are overwhelmed with false allegations, trivial cases and children who don’t need to be in foster care, the less time they have to find children in real danger.  So they make even more mistakes in all directions.  That’s almost always the real reason for the horror stories about children left in dangerous homes.

So in case there are any other Kansas reporters who want to reconsider old assumptions, here’s some context.

● Kansas tears apart families at one of the highest rates in the nation – nearly double the national average.  The number of children trapped in foster care on any given day in Kansas is higher than all but four or five other states.

● And those are just the official figures.  Many states use a system of hidden foster care to hide large numbers of placements.  But Kansas has another dodge that, as far as I know, is unique.  If Kansas were required to count these placements as well, the state might well be the child removal capital of America.  You can read all about how Kansas gets away with it here.

● One former Kansas human services chief, Don Jordan, was apparently caught in a bald-faced lie; we just don’t know which was the lie.  While meeting with parents in 2008, he said:

In Sedgwick County [metropolitan Wichita] oftentimes we end up writing things because it's what our social workers get bullied by the District Attorney's Office into writing. So they really have no belief in what it says. [Emphasis added].

Later in the meeting, Jordan said:

I am working on our staff that we do our assessments properly and we not get bullied into writing things we don't believe. But then the reality comes down to, you send a 25-year-old social worker into a room with a 15-year county ADA (assistant district attorney) who is willing to yell at them, cuss at them, scream at them and threaten them, you know.

But when he found out the comments would become public, Jordan, told the district attorney that he was just “pandering” to the parents.  That gives a sense of just how abysmal Kansas child welfare leadership has been.

By the way, that didn’t happen under Brownback.  Both the apparent lying and the inventive method for hiding foster care placements took place under former Democratic Gov. Kathleen Sebelius. In Kansas, child welfare has been bipartisan: both parties have failed miserably.

● Another former Kansas human services chief effectively admitted that large numbers of Kansas children are in foster care needlessly – in the most bizarre way possible.  Confronted with the fact that so many Kansas foster children were running away – and how little she seemed to know about it, Phyllis Gilmore sought to reassure people that children running away from foster care isn’t always so bad. So, according to The Kansas City Star:

(Gilmore) said that in many cases, children have left to go back to their biological families or other people with whom they have a relationship in order to try to not be in foster care. … “So it isn’t always a tragedy but some certainly can be and that’s why we have to take it all very seriously,” Gilmore said.

But wait a minute. The Kansas Department of Children and Families, as the agency now is called, says children are taken away only when they have been harmed or are at imminent risk of harm — harm so severe it can’t possibly be prevented without resorting to foster care. And, of course, children are not supposed to be returned as long as those harmful conditions exist.

So how can it not be a tragedy when children go running straight back to these supposedly horrible parents who are such a danger to them?

Unless, of course, many of those parents are not actually a danger — and Gilmore knew it.

● A group that should be helping to fix all this may make things worse; not on purpose, of course, but because of naiveté about how child welfare works and what’s needed to fix it.

Kansas Appleseed has partnered with the group that calls itself “Children’s Rights” which has brought another of its McLawsuits in Kansas.  There’s an excellent chance the suit will actually make Kansas child welfare even worse.  That’s because you can’t solve these problems by hiring a bunch more caseworkers and launching another foster parent recruiting campaign.

Kansas doesn’t have too few foster parents.  Kansas has too many foster children.  And if all you do is go on a caseworker hiring binge, without changing what those caseworkers actually do, all you get is the same lousy system only bigger.

Wrongful removal drives everything else. The only way to fix foster care is to have less of it.  And that won’t happen until we start seeing everyone in that system, children and parents, for who they really are.

For more about Kansas child welfare, see the comprehensive report issued by NCCPR in 2007. Unfortunately, it's not out of date.
Posted by National Coalition for Child Protection Reform at 6:00 AM