Philadelphia DHS has a new scapegoat for the City’s obscene rate of child removal: Philadelphians!


DHS Commissioner Cynthia Figueroa seems to be suggesting that Philadelphia is a cesspool of depravity so much worse than other cities that it explains why they take away so many children. (But they’re commissioning another study of the problem.) 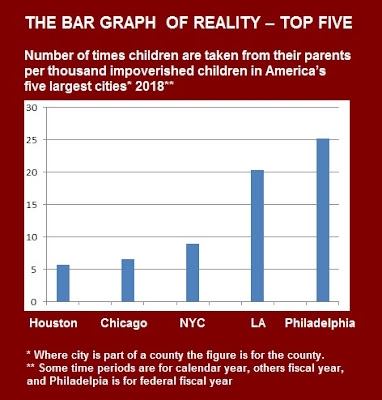 The Philadelphia Department of Human Services has been taking so much heat for tearing apart families at the highest rate among America’s biggest cities, (worst among the top five, a close second to worst among the top ten, even when rates of child poverty are factored in) that it has commissioned a new study of the problem.  At the same time, the department has a new scapegoat for the swath of family destruction it cuts through the city’s poor neighborhoods: Philadelphians.

Those are among the takeaways from agreat story by freelance writer Courtenay Harris-Bond in Philadelphia Weekly – the first in a three-part series. (Links to the rest of the series are at the end of Part One.)

UPDATE, NOV. 15: When I first saw the story, I overlooked the excellent column that accompanies it, from Philadelphia Weekly editor Kerith Gabriel. Don't make the same mistake!

The story includes chilling accounts of the harm done to children by needless removal from parents or extended families -- to which DHS and its commissioner, Cynthia Figueroa, respond with a litany of excuses, some familiar, some new.

The good news: DHS no longer appears to be denying its extreme outlier status outright. (Remember the Pyramid of Bulls**t?)  And DHS even is commissioning a study of the issue.  (At least I hope that’s good news. DHS already has a study, but apparently prefers to ignore it, which raises the question of whether DHS is just going from consultant to consultant until they find one that will tell the agency what it wants to hear.)

The bad news: Having acknowledged its outlier status, DHS can’t face up to the fact that the fault lies with DHS. They can’t admit that they are the primary reason why Philadelphia tears apart families at nearly triple the rate of New York City and nearly quadruple the rate of Chicago.  So we get the excuses:

● First DHS tries to divert our attention from the number of children taken away over the course of a year – entries into care – to a different statistic, the “snapshot number,” which shows the number of children trapped in foster care on a given day. Philadelphia does badly in both categories, and both numbers are important. But it’s entries that really shows a jurisdiction’s propensity to tear apart families.

● Then a p.r. person for DHS says that “We’re all reporting in the same categories to the federal government, but how you define that category can be different.” 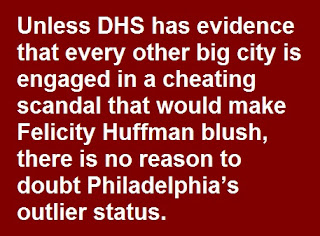 But what we’re measuring here is foster care, not subcategories. The federal government does have a clear, standard definition of foster care that every jurisdiction is expected to follow.  There also is a clear, standard definition of an entry into care.  It’s true, some places cheat.  But unless DHS has evidence that every other big city is engaged in a cheating scandal that would make Felicity Huffman blush, there is no reason to doubt Philadelphia’s outlier status.

Indeed, a consultant hired by DHS itself came to the same conclusion, and issued an exhaustive report on how to fix the problems – a document DHS apparently wants to ignore.

● Then DHS points out that they’re placing a greater proportion of children with relatives instead of strangers than they used to.  That’s true – and that is an improvement. But kinship care is still foster care.

● Then DHS dredged up the Sandusky excuse.  All those new laws passed in the wake of the scandal surrounding former foster parent and group home operator Jerry Sandusky prompted many more people to report their slightest suspicion of child abuse, so of course that would lead to a spike in child removals.

That is the standard excuse offered up by child welfare systems whenever there is a foster-care panic – a sharp, sudden spike in removals of children from their homes following a high-profile child abuse tragedy.  And it doesn’t hold up.

First of all, every big city has foster-care panics – New York City has had at least three since 1995 – but in spite of that, Philadelphia takes away children at a far higher rate.  And Philadelphia has been an outlier for well over a decade. The problem goes back well before the Sandusky scandal (and, in fairness, well before the current leadership at DHS).

But also, during a foster-care panic, what rises most is the proportion of bulls**t reports alleging child abuse and neglect.  That’s because anyone and everyone is constantly encouraged to report anything and everything, so they do just that.  And, of course, “mandated reporters,” such as school personnel, who can be punished for failing to report, are even more scared than usual, so they’re even more prone to report cases they know are ridiculous.

Those same new state laws that Philadelphia blames also apply in Pittsburgh, of course. But in metropolitan Pittsburgh, the longtime director of the human services agency knew that a lot of the new reports would be absurd and demanded that his staff not panic. So there was no increase in foster care in Pittsburgh.  (Though it should be noted, the rate of removal in Pittsburgh also is way too high.)

DHS suggests it’s all YOUR fault

● But the most striking excuse of all is the one in which Figueroa seems to be blaming Philadelphia’s high rate of removal on – Philadelphians.  From the story:

“The number of children in DHS care reflects the safety, risks, and environments of children in Philadelphia,” Figueroa said. “We are doing everything we can to keep families together.”

Now that’s odd.  Because Philadelphia’s rate-of-removal is out of line with all of the five biggest cities and all but one of the ten biggest cities even when you factor in rates of child poverty.  In other words, compare entries into care to the number of impoverished children in each city and Philadelphia is still an extreme outlier.  Indeed, those consultants DHS hired and then ignored did a special comparison to other high-poverty cities – and Philadelphia still was an outlier.

Citing cities such as Detroit, Baltimore and Milwaukee, the consultants noted that these places “also have high rates of children in poverty, but do not experience out-of-home care rates even approaching those of Philadelphia.”

And there’s more about the DHS Excuse Machine in these blog posts. (Scroll past this one after clicking on the link.)
Posted by National Coalition for Child Protection Reform at 10:39 AM