Foster care in Kansas: Kansas Appleseed chooses the “child savers” over the children 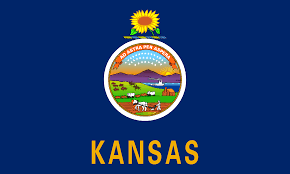 They’re backing another pointless – and potentially harmful – McLawsuit by the group that calls itself Children’s Rights.

Here we go again.  The group that so arrogantly calls itself Children’s Rights (CR) – while ignoring children’s right to their own families – has filed another of their McLawsuits against a state child welfare system.

Nothing unusual in this. But one of their allies in the suit ought to know better.  For them, signing onto the suit is a betrayal of their own stated mission.

CR’s McLawsuits reflect the finest thinking of the 19th Century – when self-proclaimed “child savers” rushed to take impoverished children from their supposedly unworthy, unfit parents.  That’s still the norm today.  But instead of working to curb these practices, CR lawsuits aim to “fix” foster care largely by throwing more caseworkers and more paperwork at the problems.

This time the target of the lawsuit is Kansas.

As usual, CR’s description of the enormous harm the system does to children is undoubtedly accurate.  As a horror show for children, Kansas child welfare may be matched only by Texas. But as usual, CR got the solutions all wrong. 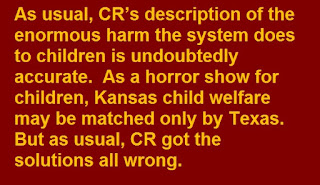 The lawsuit ignores the problem that drives everything else: The system is inundated with children who never needed to be taken from their parents in the first place.  CR always ignores this. But it takes a particularly willful measure of ignorance to ignore it in Kansas.

Kansas tears apart families at the a rate nearly 50 percent above the national average. And that’s only the official figure. As we first discovered more than a decade ago, the state hides a huge number of entries into foster care, violating at least the spirit and possibly the letter of federal regulations. Include those placements in the total and Kansas may be tearing apart families at the highest rate in the nation. (There’s more about all this, and the other failings in the Kansas system, in our 2008 report on Kansas child welfare.)

Even the former head of the Kansas child welfare agency effectively admitted, albeit inadvertently, that there are plenty of children in Kansas foster care who don’t need to be there.

And what does CR’s 68-page lawsuit complaint say about this?  Not one word.

After documenting some of the most horrific problems in any foster care system in America, the solutions called for by the suit are mostly requests for injunctions barring the state from doing things such as moving children from home to home night after night, sometimes more than 100 times. But Kansas can’t stop doing that until Kansas stops taking too many children needlessly.

They also seek a study to tell us what we already know -- that caseloads are too high -- followed by the usual caseworker hiring binge.  But if all you do is hire more caseworkers without changing Kansas child welfare’s take-the-child-and-run approach, all the new caseworkers simply chase all the new cases and all you get is the same lousy system only bigger. 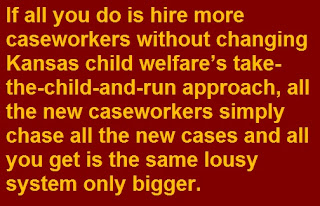 And it can get even worse.  All those caseworkers cost money.  That’s fine, I’m all for spending moresmarter. But CR has an unfortunate habit of demanding more spending without putting any limits on where the money comes from.  So at least two states complied with settlements of CR lawsuits cutting aid for poor families.
on child welfare – if an agency also spends

That’s not the only way things could get worse. CR actually seems to be calling for Kansas to add more of the worst form of care of all: “residential treatment centers” (RTCs) – even though there is no evidence it works, even though there are far better alternatives, and even though, on the very next page of its complaint, CR acknowledges that existing beds in RTCs are being filled by children who don’t need to be there! (By which, of course, CR means they could be in foster homes. CR would never, ever suggest they could be in their own homes.)

CR has two partners in this suit.  One is the National Center for Youth Law, based in California.  No surprise there.  Long ago, their similarly myopic approach to litigation prompted me to call them “Children’s Rights West.”

But the big disappointment is the other partner: Kansas Appleseed.  They really ought to know better.  On its website, they say they “investigate social, economic, and political injustice in Kansas and work toward systemic solutions.”  They describe themselves as part of a network “working to defeat poverty and injustice.”

But this lawsuit does nothing to defeat either and may worsen both. 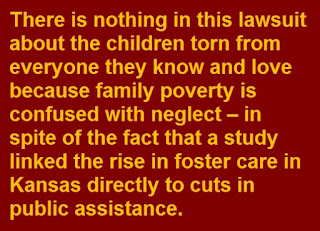 ● There is nothing in this lawsuit about the children torn from everyone they know and love because family poverty is confused with neglect – in spite of the fact that a study linked the rise in foster care in Kansas directly to cuts in public assistance.

● There is nothing in this lawsuit about the racial bias that permeates child welfare.

● There is nothing in this lawsuit about providing concrete help to families instead of simply hiring new caseworkers to do exactly what the old caseworkers do – needlessly tear apart families at an obscene rate.

(Oh, and there’s also nothing about curbing the mad rush to termination of parental rights and quick-and-dirty slipshod adoptive placements, even though three of the ten “named plaintiffs” in the suit were victims of failed adoptions.)

And Kansas Appleseed is not alone. Over the years, Appleseed groups in two other states have joined similar McLawsuits.

Perhaps they were lulled into joining by CR’s oft-repeated claim that you can’t sue on behalf of children not yet in the system.  In fact, you can – as evidenced by the fact that CR itself has done it.

And, of course one of the only class-action lawsuits that ever significantly improved a child welfare system, the one in Alabama, was built around rebuilding the system to do more to keep families together.  One of the groups that brought the lawsuit, the Bazelon Center for Mental Health Law wrote a whole book about it. (Bazelon’s legal director also is a member of NCCPR’s volunteer Board of Directors.)

So it can be done.

And there’s still a way to do it in Kansas.  Most of these McLawsuits are resolved through negotiations.  The resulting agreements usually involve a lot of pointless micromanaging and, of course, the caseworker hiring binge.

But it doesn’t have to be that way. Kansas Appleseed can be true to its stated mission by insisting on an Alabama-style resolution to the case - instead of what usually follows a CR McLawsuit: A CR McSettlement.
Posted by National Coalition for Child Protection Reform at 11:00 PM