“Child welfare” in Arizona: The parent punishment system in action

Studies have found abuse in at least one-quarter to one-third of foster homes. The record of group homes is worse.  So when Arizona’s so-called “Department of Child Safety” needlessly tore four little girls from their father and threw them into separate group homes, they should have known what was likely to happen.

You spanked your ten-year-old boy too hard.  We have to punish you for this. So to punish you we’re going to arrange to have two of your daughters sexually abused. That’ll teach you a lesson!

Absurd, right?  No one could possibly be so cruel – and so shortsighted.  But while the part about the child protective services agency arranging the sexual abuse on purpose is entirely made up, everything else really happened.  And while of course no child protective services agency would try to do this to a child on purpose, the caseworkers should have known that the odds were better than 50/50 that something like this would happen.

Here’s the actual story, as told by the Arizona Republic in the first installment of a series following five families over two years.  In addition to the print stories, these families are the subject of a documentary that premiered in Arizona on Nov. 11.  The Republic included this except about the case of Stephan McCray and his children.

McCray’s then ten-year-old son was misbehaving in school; he threw something at another student.  “That’s behavior I won’t tolerate,” McCray says.  So McCray spanked him.  The police and the Arizona agency that goes by the Orwellian name “Department of Child Safety” alleged that McCray left "numerous marks across [the child’s] back and left arm." McCray says the investigators “mistook scars from childhood scrapes as evidence of child abuse.”

Whichever is the case, had McCray been white and middle class, odds are he simply would have been sent off to “counseling” with a private therapist and that would have been the end of it.  But, of course, he is neither.  (He’s also a follower of the Nation of Islam, which, he says, further discomfited the white, middle-class caseworkers he dealt with.)

Though there was never any allegation that McCray abused or neglected his other four children, all of them were taken – possibly illegally.

According to the story:

Four of [the children] shouldn’t have been taken from him, [McCray] says: Stephan Jr. was the only child listed in the court order, so why were all five removed?  But when he asks DCS, he says he’s told too bad, his attorney should have caught the error.

McCray’s own mother – a former foster parent – was ready and willing to take the children. But she was turned down - because she didn’t see her son exactly the way DCS did – as a danger to his children.

What did DCS think was going to happen?  Did they think McCray would sneak into his mother’s home through an open window in the middle of the night to spank his kids? 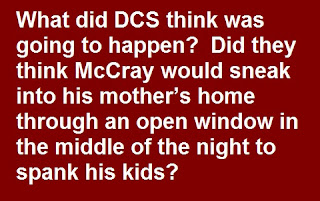 Instead, all of the children, their ages ranging from six to 10, were torn not only from their father but also from each other. Then they were institutionalized – consigned to the worst placements of all, group homes.  For months they were not even allowed to visit each other.  McCray says one of his daughters became so upset that the group home called police – for a child who couldn’t have been more than eight years old. The police took her to “a psych ward at a hospital.”

And then, Stephan and his mother say, two of the young girls were sexually abused.

Multiple studies have found abuse in one-quarter to one-third of family foster homes. The record of group homes and institutions is even worse.  Thus, DCS had every reason to know that if they took five young children and placed them in five separate group homes, at least one of them was likely to be abused there. 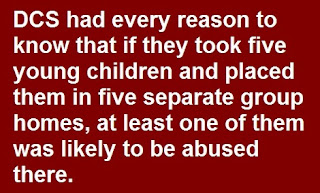 Nevertheless the “Department of Child Safety” took away four children who they never so much as alleged were abused in their own homes and placed them at enormously high risk of abuse.  And that, of course, is on top of all the emotional trauma inflicted on the children by being taken from their father, their extended family and each other.


Ultimately, DCS decided it would be o.k. to place the children with their grandmother after all.  Then, two years after they were removed, the children were reunited with their father – much the worse for the experience.

For the "Department of Child Safety," it’s not really about child safety

The agency name notwithstanding, “child safety” was never really the point.

Critics of the system often say that it is not really a child protection system at all; it’s a parent punishment system.  The child welfare establishment denies this. So it was striking to find a 30-year veteran of that establishment actually admit as much, albeit accidentally.

Karen Kline, a former caseworker who now runs child welfare initiatives for something called the Family Involvement Center.  In the story and the documentary, she pays the usual lip service to understanding the trauma of removal.  But when she is asked about allegations by McCray and his mother that the case was affected by racial bias, she replies:

Case managers get training in racial and cultural sensitivity, she says. But it's wrong to equate a punishment for spanking with racial bias, she says. [Emphasis added.]

Kline is wrong. Punishing a parent for spanking might not be racial bias if all parents who spanked their children were treated the same way.  An overwhelming body of research tells us they are not.

But more revealing is Kline’s apparent acknowledgment that the primary purpose here was to punish the parent.  That would help explain how easy it was for DCS to be blinded to all the harm the agency was doing to the children.

The story reveals other examples of child welfare practices that are as typical as they are harmful to children.

● One of the strikes against McCray in the spanking case was the fact that he’d been in trouble with DCS before – for what was, in fact, a classic example of child welfare confusing poverty with neglect.  As the story explains:

Five years earlier, DCS checked out complaints of neglect against him after he left his younger children alone in his apartment while he ran to a school, less than a block away, to walk his daughter home from kindergarten.

For that the children were placed for two years in kinship foster care – with the same grandmother DCS later would say was unfit to be a caretaker.

● At one point, McCray was criticized for missing drug testing, something required because he was on probation due to the criminal charge.  But why were drug tests ever ordered in the first place?  There is nothing in the story suggesting McCray abused drugs.

● McCray pled guilty to the criminal charge – because, his lawyer said, if he fought it the case would drag on and on, foster care would be prolonged, and DCS then could turn around and use the very fact of the delay to move to terminate his parental rights.  But that means he has a criminal record – so it’s harder to get a job.

● At one point, he had a job but he lost it “due to the demands of court hearings, classes and meetings mandated by the state plan to reunify him with his kids.”  Then, not having a job itself became an obstacle to getting his children back.

● The final obstacle was housing – making the McCray children among the estimated 30 percent of foster children who were kept away from their families because of housing.  Ultimately, as McCray himself notes, DCS really did help with that – but it never should have been an issue at all.

None of this agency behavior would make sense in a real child protection system. It makes perfect sense in a parent punishment system.
Posted by National Coalition for Child Protection Reform at 11:00 PM