Now an even bigger study – of Texas CASA programs – has produced even worse findings.  Check out the way Texas CASA is responding.

Last week, this blog reported on the dismal findings from the largest, most comprehensive study ever done of that most sacred cow in child welfare, Court-Appointed Special Advocates.

CASAs are overwhelmingly white overwhelmingly middle-class amateurs sent into the homes of people who are overwhelmingly poor and disproportionately of color.  The amateurs then tell judges what decisions to make and, to a frightening degree, the judges rubber-stamp the recommendations.  Though CASAs almost always mean well, their only real “qualification” typically is their (usually) white, middle-class status.  In Travis County, Texas, (metropolitan Austin) the CASA chapter was founded by the local Junior League. 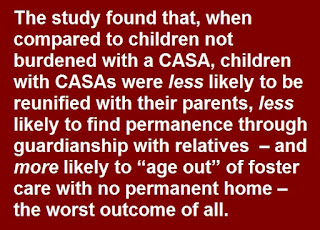 The new study is discussed in detail in this previous post, including a link to the full study. It looked at more than 31,000 cases in Texas. It found that, when compared to children not burdened with a CASA, children with CASAs wereless likely to be reunified with their parents, less likely to find permanence through guardianship with relatives  – and more likely to “age out” of foster care with no permanent home – the worst outcome of all.


In short, CASA makes the Holy Grail of child welfare – permanence (or “permanency” as the child welfare establishment pompously calls it) less likely.

The study was commissioned – and paid for – by Texas CASA.  Back in 2004, National CASA commissioned a similarly comprehensive, rigorous study – and it produced similar results.

Now the Austin American-Statesman has published a big story about the study findings,  including responses from CASA and the researchers they hired.

So let’s go through the excuses CASA’s defenders came up with, one by one. (Everything below in italics is an excerpt from the American-Statesman story), beginning with a statement that, even for CASA, is breathtaking:

“Our recommendation is always going to be what’s in the best interest of the child,” said Vicki Spriggs, chief executive officer of Texas CASA.

Wow!  I’d never before heard of the Doctrine of CASA Infallibility.  Good to know.  Now we can shut down the social work schools lay off the caseworkers and get rid of the judges. CASA knows best.  CASA always knows best – because forget that pesky research, the head of a state CASA program says so!

For the record, all sides in all child welfare cases say that whatever they want is in the best interests of the child.  The evidence from the actual study says CASAs are prone to getting it wrong.

Oh, please Ms. Spriggs. Don’t be so modest.  Texas CASA says it doesn’t track how often recommendations are accepted, but the 2004 national study found that in 83 percent of cases judges accept at least three quarters of all recommendations made by CASAs. In 61 percent of cases judges rubber-stamped every single one of them. And, of course, if Texas CASA recommendations were not routinely rubber-stamped the study would not have found such big differences in outcomes (for the worse) when Texas children had CASAs.  So let’s not kid ourselves, those disproportionately white middle-class amateurs often are the judge in all but name.

Also, notice how Spriggs said judges get “the parents’ information” – not that the parent even has a lawyer to present her or his case. That’s because in Texas poor people often don’t get a lawyer in these cases until well after they’ve begun.

There were limitations to the study, which relied heavily on administrative data from the state and CASA, that didn’t allow researchers to capture the benefits of having CASA volunteers, according to[Lead researcher Cynthia] Osborne and CASA officials.

Even though her study tried to control for it, there’s no perfect statistical tool to account for the fact that CASA volunteers tend to receive more complex cases, Osborne said.

Now it’s Osborne who’s being too modest.  In the study itself, Osborne and her colleagues go to great lengths to show how they controlled for this, and express great confidence in their success.

"CASAs are not going to really help parents complete their services. That’s not really the goal of CASA. If they’re getting cases that are really difficult to tackle during this ... period, that’s not something the CASA themselves can influence,” Osborne said.

First of all, that doesn’t explain why the study – which rigorously controlled for the issue of difficulty of cases – still found that the outcomes for children with CASAs are worse.

But even more revealing is that part about how the goal of CASA is not to help parents complete their services. 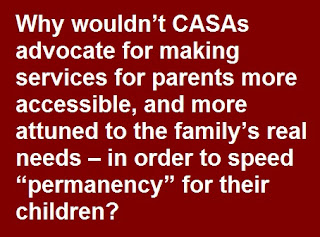 Why wouldn’t a CASA understand that if a parent can get help navigating the maze of “services” – which often are merely hoops they must jump through – then the child can get out of foster care sooner and that’s in the child’s best interests? So why wouldn’t a CASA advocate for reducing meaningless barriers for families?  Where the services really are needed, why wouldn’t CASAs advocate for making them, say, more accessible, and more attuned to the family’s real needs – in order to speed “permanency” for their children?

Unless of course, the CASAs see their jobs as just monitoring families and waiting -- perhaps even hoping -- to see them fail, so the children can be placed in the homes of middle-class strangers – people more like CASAs themselves.

In Texas, 72% of CASA volunteers are white; about 30% of foster children are white. … Officials with the Travis County chapter said 35% of new volunteer applications this year have come from people of color.

Which means 65 percent are not.  So even if all those applications are accepted, you’ve barely made a dent in the problem.

And that does nothing to deal with the problem of class bias.  Being a CASA requires having the time to volunteer.  Poor people desperately struggling to get by aren’t likely to have that kind of time.

Spriggs said the association also is working to make it easier for people with fewer resources to be CASA volunteers, including reimbursing mileage and lodging for those who must travel to see their assigned child.

Oh, well, that will make it easy for someone holding down two jobs to just take some time off to do all that traveling (and their bosses won’t mind a bit) – so of course lots of poor people now will become CASAs!

The entire extent of training, before CASAs start marching into poor people’s homes and passing judgment on them, is 39 hours.  That’s supposed to cover everything.  So how much time is spent on recognizing bias?  Whatever the amount is, the results of the study itself suggest it is ineffective.

Many of the adults involved in the child welfare system, including caseworkers, judges and attorneys, do not reflect the demographics of the children they serve.

“That’s a situation much bigger than CASA,” said Travis County Associate District Judge Aurora Martinez Jones, who advocates for more awareness of how the child welfare system affects children of color. “There are institutional issues that have created disproportionate issues for families.”

Well, yes.  And one of those institutional issues is the assumption, astounding in its arrogance, that, as one law review article aptly notes, simply being white and middle class somehow qualifies one to judge poor families. So why make everything worse by allowing a program that, as the law review article put it “essentially give[s] voice to white supremacy”?

For the past six years, Travis County CASA has ramped up efforts to find potential family members for the children they represent. In the first two weeks of a case, a dedicated team at the chapter works to find relatives who can step in and care for a child, an effort that increased the number of relatives engaged in cases by 36%, according to county CASA officials.

But what does “engaged in cases” mean? Apparently it doesn’t mean actually getting guardianship when children can’t reunify because the study – you know, the document with actual data – found that Texas children with CASAs are less likely to achieve “permanency” through guardianship by relatives.

But if CASA’s efforts to “find relatives who can step in and care for a child” are helpful in other ways, then CASA should go right on doing that.  By all means, let CASA become a family-finding service.  Similarly, let it become a mentoring service for foster children.

Just don’t let the Junior Leaguers and other overwhelmingly white and middle-class amateurs play a role in deciding whether poor children are allowed to live with their own families.

Read more about the failure of CASA here.
Posted by National Coalition for Child Protection Reform at 11:00 PM