Foster care in America: Caseworkers in denial, and their enablers

Imagine for a moment that you are listening to a discussion program on your local public radio station.  The role of police is mentioned briefly, but it is tangential to the topic at hand.  Nevertheless, a police officer rushes to call in to defend conduct that was never under attack; and the program is keen to put his recorded comment on the air.  “I want you all to remember” he declares, that police would never needlessly stop and frisk anyone, there’s no such thing as false arrest, and certainly no police brutality.  There’s so much more to these cases, you civilians just don’t understand.

A journalist on the panel rushes to agree, declaring that these are all extremely complex cases and police can never jail anyone without proof.  And they certainly don’t stop-and-frisk people “at the drop of the hat.”

You’d probably roll your eyes at the police officer and wonder why his comment was even on the program.  You’d really wonder about the journalist. Whatever happened to the skepticism in which journalists take such pride?  What about holding power accountable?

We got the answer last week.

Meet Laura the caseworker.  She was sooooo upset.

She was listening to The 1A, a discussion program with listener participation produced for NPR by Washington, D.C. public radio station WAMU.  It is usually among the best such programs, with host Joshua Johnson asking thoughtful questions and skillfully steering the discussion. (Though he makes it sound easy, having actually hosted a somewhat similar public radio program a very long time ago, I can tell you it’s not.) 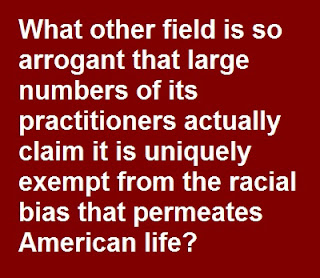 The topic of the program’s first hour on July 24 was school lunches, how we wound up where we are with such programs, and the general question of lunch shaming.  The news peg, of course, was that Pennsylvania school district that suggested children could be placed in foster care if their parents didn’t pay their lunch money debts.  Child protective services actually wasn’t on the menu for discussion.  But Laura the caseworker was still upset.

No, it wasn't the outrageous behavior of the school district that prompted her to call into the program. Rather, she feared that someone, somewhere might actually get the impression that child welfare systems arbitrarily and capriciously investigate families and remove children from their homes.

They do, in fact, do just that.  But every time there’s a serious possibility people might notice, it gets many those who work in the system upset.  Look at how desperate people in American child welfare have been to claim that what they do is nothing like what Trump did on the Mexican border. Of course there are differences – but there are far more similarities.  So many, in fact, that I’ve made a checklist.

The caucus of denial

Similarly, child welfare has what amounts to a “caucus of denial” that insists there is no racial bias in the field – despite the mountain of evidence that tells us otherwise.  What other field is so arrogant that large numbers of its practitioners actually claim that it is uniquely exempt from the racial bias that permeates American life?

It is an arrogance bred by nearly untrammeled power, combined with obsessive secrecy.  And too often, journalists are complicit in the efforts of child welfare professionals to distance themselves from the harm their work often does to the children that, usually, they sincerely want to help.

It’s as if the journalists themselves, often of the same race and/or class as child welfare professionals, foster and adoptive parents, can’t bring themselves to believe that generally good well-meaning people, who are so much like themselves, could wind up harming children in much the same way as those who act from calculated cruelty – such as Trump or that Pennsylvania school district.

And that brings us to Laura the caseworker (1A doesn’t give the full names of listeners who comment), and why 1A inserted her irrelevant comments into the discussion – just to be sure no would, for even a second, think ill of child protective services.

At the end of this post, I’ll offer a reading list I hope the producers of 1A will look at before they venture into child welfare again.  But right now, let’s examine what Laura said when she left this voicemail on the program’s listener comment line:

I work in dependency court as a child welfare social worker in California for 6 years; and I just want 1A to remember that there are many more details that are not known to the public about why families get involved and, I can assure you it’s not just because they’re not paying the lunch money.

OK, let’s stop right there.  First, notice the finger-wagging arrogance throughout: “I just want 1A to remember…” “…I can assure you …” Next, notice how the worker hides behind confidentiality laws that are put in place at the behest of child welfare agencies themselves to shield them from scrutiny.  What she’s saying is: Trust us. We’re always right, but we just can’t tell you about it.

There’s a strict criteria that dictates when and how much child welfare services can be involved.

That is simply not true. 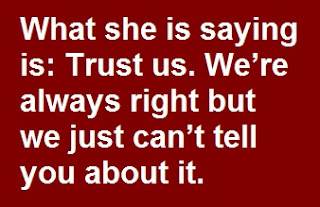 Oh, I’m sure there are thousands of pages of policy manuals but they don’t matter.  Many state laws   Who decides if it’s an emergency? The caseworker. The power is often abused.
literally define lack of food (or clothing or shelter) as “neglect” (and, well, if they’re not paying their lunch debt, who knows, right?) Caseworkers can remove children from their homes entirely on their own authority in an “emergency” (or ask law enforcement to do it for them).

And study after study has shown that at every stage in the decision-making process, from screening a hotline call, to substantiating a case, to removing a child to termination of parental rights, workers are more likely to act against the family if the family is African-American – even when the actual risk to the child is the same.

But it just really bugs me when there’s an allegation of just taking kids away for that, when really there’s so much more to the story.

Notice the hyper-defensiveness.  Nobody actually accused the child protective services agency of taking children because of school lunch debts.  The issue was the school district threatening to report families for that reason.  But, the producers of 1A were so sympathetic to her claim that they inserted it into a program that otherwise had little to do with the role of child protective services, but only with a school district’s threat to try to use the agency.

After the caseworker-in-denial came the journalistic enabler.  Johnson turned to Laura Meckler, national education reporter for The Washington Post.  She promptly agreed with Laura the caseworker:  Said Meckler:

I think that’s right. These child welfare cases are extraordinarily complex. You have to prove that there’s abuse or neglect. 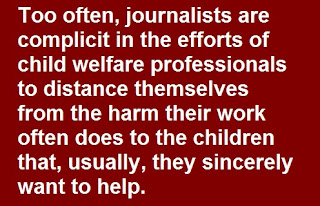 As noted above, a caseworker can have children removed entirely on her or his own authority. Children can be held for months, even years, in foster care before any court ever finds that there actually was abuse or neglect.  And even then the standard of proof is not “beyond a reasonable doubt” or even “clear and convincing” – it’s “preponderance of the evidence” – the same standard used to decide which insurance company pays for a fender-bender.

A couple of other details:

● The family might or might not get a lawyer – and if they do it’s probably an overwhelmed public defender who met them five minutes before the first court hearing.

● The judge knows that if she returns the child home and something goes wrong, her career could be over. Hold hundreds of children in foster care needlessly and the children will suffer terribly but the judge (and the caseworkers) will be safe.

● In most states, all the court hearings are secret.

Now, back to Meckler:

I think that what is much more likely to end up in a child welfare investigation is a report that there is no food in the house, and a child welfare worker comes to the house and looks in the fridge and there’s nothing there. That’s the kind of thing that lands somebody in losing their kids temporarily or potentially permanently. It’s not like this stuff happens at the drop of a hat.

So what Meckler really is saying is: If the family can’t pay the lunch money debt and can’t afford to feed the child at home, then it’s o.k. to take away the child – potentially permanently!  I guess it’s hard to see the extent to which child welfare confuses poverty with neglect if you have no problem with such confusion in the first place.

So how might this play out in the Pennsylvania school district case, had the district carried out its threat:

● The district phones in a report alleging that a child is being deprived of food because parents are neither providing lunches themselves nor paying for the school district to do so.

● Because the call comes from a “mandated reporter” it’s automatically given more credibility at a child abuse hotline, so it’s more likely to be accepted for investigation.

● If the caseworker finds a spotlessly clean home (because CPS workers have an unfortunate tendency to equate cleanliness with being a wonderful parent, and vice versa) and if the pantry and refrigerator are well stocked with the right kinds of foods, then the worker almost certainly will close the case – with the children left much the worse for the whole experience.

But if, God forbid, the home is dirty or the cupboards are bare, or the housing is seriously rundown down or, worst of all, mom or dad smoked pot, then depending on the caseworker who came to the door and the community in which it occurred, the children might very well wind up in foster care.

At the drop of a hat.

I don’t expect journalists unfamiliar with child welfare to know this; I certainly didn’t when I was starting out in journalism all those years ago.  But I do hope that producers venturing into this territory will do their homework.  So here’s the homework.  See especially the first  New York Times story and the excellent work from other NPR programs.

● The New York Times on how foster care has become the new “Jane Crow.”

●The Times also reported on how parents can lose their children for smoking pot.

● There’s this from the Houston Chronicle about a family whose children were taken solely because of inadequate housing.

● The reporter who would go on to expose the Flint water crisis did this story for Detroit’s alternative weekly Metro Times about what typical child welfare agencies do in typical cases.

● There’s this story from KRIV in Houston and this one from the same station.

● There’s this story from WXYZ-TV in Detroit. (There were many more from WXYZ, but broadcast websites tend to be less good about keeping their stories online.)

● And the Biloxi, Miss. Sun-Herald  made how secrecy harms families the theme of a six-part series.
Posted by National Coalition for Child Protection Reform at 9:44 AM