The child welfare surveillance state: When the school bullies include the School Board President


● A Pennsylvania school district sent letters telling parents if they didn’t pay overdue bills averaging $22 each, their children could be placed in foster care.  They backed down when even the child protective services agency objected.

● But there is nothing unusual about a school district “weaponizing” CPS for its own convenience – because politicians and CPS agencies have spent decades encouraging it.

You probably know the story by now.  But it’s important to understand the context. 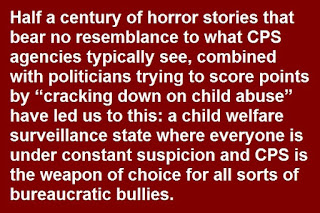 There is nothing unusual about school districts using child protective services agencies as a weapon. It happens because we allow it to happen. Half a century of horror stories that bear no resemblance to what CPS agencies typically see, combined with politicians trying to score points by “cracking down on child abuse” have led us to this: a child welfare surveillance state where everyone is under constant suspicion and CPS is the weapon of choice for all sorts of bureaucratic bullies.

ICYMI: Here’s what happened in Pennsylvania

The bullying that made headlines across the country is from the Wyoming Valley West school district in Luzerne County, Pa.

More than three-quarters of the students are considered “economically disadvantaged.”  Some of their parents had fallen behind in paying for their children’s school lunches.  About 1,000 students owed a total of $22,467 – an average of $22.47 per student.

What’s a school district to do?  Isn’t it obvious? Send out a letter to parents warning that if they didn’t pay up, their children might be taken away.  The letter reads like the text of those scam phone calls meant to dupe people into thinking they’re about to be arrested by the IRS.

But this letters is real.  It says:

“Your child has been sent to school every day without money and without a breakfast and/or lunch.  This is a failure to provide your child with proper nutrition and you can be sent to dependency court for neglecting your child’s right to food.  If you are taken to dependency court, the result may be your child being removed from your home and placed in foster care. ... [P]lease remit payment as soon as possible to avoid being reported to the proper authorities.”

The letter was sent by the district’s Director of Federal Programs, Joseph Muth.  They were staunchly defended by the School Board President, Joe Mazur.  According to the Wilkes Barre Times Leader:

Mazur insisted the letter “certainly did the job” in generating responses. “We took a drastic measure. It probably wasn’t very popular, but it never is when you try to collect payment.”

Well, yes. Kidnapping the children and holding them for ransom also would have done the job.  Was that going to be the next step?

To his credit, the board vice president was appalled.  But the district’s lawyer – who wrote the letter – was practically gloating about it to television station WBRE:

The cruelty of the letters is mind-boggling – and so is the ignorance of the school board president and administrators. They have no clue concerning the enormous trauma a child abuse investigation inflicts on a family – even when it doesn’t lead to foster care placement.  (If they do know and did it anyway, then it’s even worse.) Apparently they also had no problem with the prospect of calling in scores of false reports, stealing caseworker time from finding children in real danger.

School officials and school board members should know better than most about what can traumatize a child, and the need to avoid inflicting such trauma. Those who don’t understand this don’t belong in jobs dealing with young people.


UPDATE, JULY 24: But clearly Mazur, for one, still doesn't get it. Because of the publicity, offers have been coming in to cover the parents' debt - and, NPR reports, the school district has been turning them down. When an assistant to  Todd Carmichael, a potential donor, contacted Mazur, Carmichael says "the conversation quickly became combative before Mazur abruptly hung up the phone.” [UPDATE 8:20PM - the school district has now changed its mind, and will accept the donations.]

"This really isn't about the money," Carmichael told NPR before the district changed its mind. "I think it's about teaching people who are struggling some sort of moral lesson they need to learn, no matter what the consequences are."

That also is one of the major failings of the so-called child protection system. It isn't about child protection at all, it's about punishing parents for their "moral failings."  The mentality cuts across all sorts of government systems that encounter poor people.  But this time ...

Even cps couldn’t stomach it

You know what you’re doing to families is inexcusable when even the child protective services agency won’t make excuses for it.

"Our agency was weaponized to terrorize children and families and that's something that's just unacceptable," Joanne Van Saun, the executive director of Luzerne County Children and Youth Services told WOLF-TV. "We want to support families and maintain families whenever possible."

(The data, show that they’re not fully living up to that claim. Luzerne County takes away children at a rate 20 percent above the national average and five percent above the state average, even when rates of child poverty are factored in. But the county has been steadily improving in recent years - and at least they don’t want the school district to make things worse.) 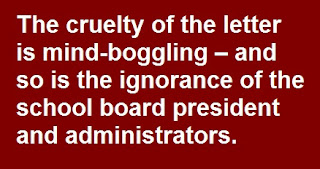 After Van Saun and County Manager David Pedri wrote a letter to the school district demanding that it “cease and desist from making these representations” the district backed off. They plan to send letters of apology to the families.

While that should be what we expect from such child protective services agencies; sadly, it’s unusual.

I suspect that, while most CPS agencies wouldn’t have endorsed what the school district did, they wouldn’t condemn it either – since their party line is report! report! report!  Call in with anything and everything, no matter how absurd, they say, and let our “professionals” decide.

In Philadelphia, for example, 114 miles away, the head of the city’s Department of Human Services reportedly tells people to just “follow their intuition” when deciding whether to call in a report. Late last year New York City’s Administration for Children’s Services decided that, what with families getting together for the holidays this was a great time to try to ratchet up their suspicion of each other.

And school officials can hide behind “mandatory reporting” laws that require them to report their suspicions.

That’s why there’s nothing unusual in the school district’s behavior.  There is, in fact, no penalty for a school district for weaponizing CPS.   In June, Searchlight New Mexico reported on how child protective services was weaponized by a school district in that state to bully a parent when she complained that her children were being bullied.  And last year, HuffPost and The Hechinger Report documented the extent of the problem nationwide.

Half a century of horror stories

After 50 years of building a child welfare surveillance state, it’s no wonder one study found that over the course of their childhoods one third of all American children – and more than half of African-American children – will have to endure a child abuse investigation, almost always due to an allegation that turns out to be false.

The corrosive effect on all of us was explained well in this courageous tweet thread from a family defense attorney.

Among the worst offenders in all this: U.S. Sen. Bob Casey, D-Pa.  In 2011, he tried to score political points off of the notorious Penn State sex abuse scandal involving former foster parent and group home operator Jerry Sandusky by introducing legislation that would have turned every American into a mandated reporter of child abuse – even though there is not a shred of evidence that mandated reporting actually curbs child abuse, and even former proponents of mandated reporting have become skeptics.

Now, when the atmosphere of fear and paranoia he helped stoke backfires in a particularly obvious way, he rushes out a tweet condemning the school district.

Preventing further damage requires far more drastic action than simply telling a school district they should stop using CPS as a weapon to get their hands on lunch money.  Here are some crucial steps (supporting data and scholarship are available in NCCPR’s Due Process Agenda).

● Put teeth into laws making malicious false reporting illegal.  It should be made a criminal offense. That is currently the case only in a few states, including Pennsylvania. But such laws can’t be enforced until we …

● Replace anonymous reporting with confidential reporting.  That is, under most circumstances the accused would not know who made the report, but the CPS agency must be given a verifiable name and contact information.  Otherwise there is no way to enforce penalties for false reporting. 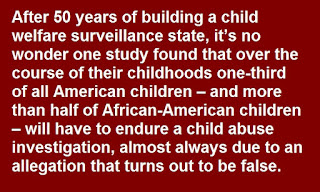 Anonymous reports are, by far, the least reliable – and people who refuse to report even confidentially are likely to be less reliable still.  The fear mongers say banning anonymous reporting would lead to some real abuse being overlooked.  But we overlook far more such abuse now – when anonymous false reports deluge CPS agencies so they don’t have time to find children in real danger.

● Go in precisely the opposite direction from that proposed by Sen. Casey – abolish mandatory  reporting and allow professionals to use their professional judgment concerning when to report – judgment that is likely to be superior to that of an underprepared, undertrained, overloaded CPS caseworker.

● Public information campaigns need to change from fear-based calls upon people to report based on “intuition” to education on what to report and what not to report. They also need to explain the consequences both of failing to report when there is reasonable cause to suspect abuse, and the harm that can be done by reports based on “intuition” or “gut feeling.”

Perhaps then fewer children will be threatened for their lunch money – by their own schools.
Posted by National Coalition for Child Protection Reform at 11:00 AM