Hey, ACS: It’s 10pm. Do you know where your overmedicated foster children are?


More than ten years ago New York State recommended that New York City’s child welfare agency, the Administration for Children’s Services, and its counterparts Upstate, collect data about the use of potent, sometimes dangerous psychiatric medication on foster children.

Last month, ACS admitted it doesn’t do that. 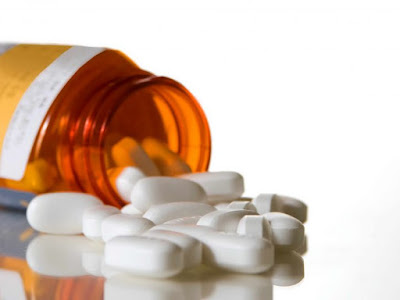 One of the many reasons foster care is so harmful for so many children is that it dramatically increases the risk that they will be doped up on potent, sometimes dangerous psychiatric medication.  The harm this does to children has been documented over and over, most recently in this outstanding series by investigative reporter Karen de Sa.

The reason it happens is simple: Nobody who loves the child can stop it.

If an agency or a foster parent, or especially a group home or institution, finds that a child is being too difficult, they can just give them pills or shots. It’s often terrible for the children, but it makes the adults’ life a whole lot easier.  Parents can object, but child welfare agencies usually are free to order such medication anyway.  (Sometimes they may need a judge’s approval, but judges don’t love children they don’t know either.)

What’s love got to do with it?

The role of love in the equation can be seen in the comprehensive data that Florida has kept for more than a decade.  When children are placed in foster care with relatives – kinship foster care – they are vastly less likely to be given psychiatric medication.  Why? Because someone who loves a child will put up with more “problem behavior” than someone who doesn’t. 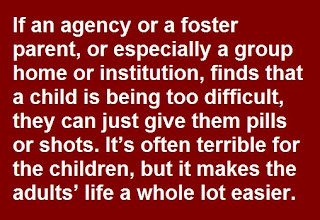 Florida learned this thanks to one of the most visionary leaders in child welfare, the late George Sheldon. When he ran the Florida Department of Children and Families he was appalled by the overuse of such medication. But Sheldon realized that simply getting consent forms rubber-stamped, shoved into individual files and put at the back of a file cabinet wasn’t enough.  He established a comprehensive database to track how every provider in the state was performing (foster care in Florida is overseen by regional private “lead agencies”).  The database tracks use of these meds by age, by gender by race and, as noted above, by placement type.


Even as most of Sheldon’s other reforms were undermined by subsequent administrations and, especially, by the demagoguery of the Miami Herald, the database has remained – and it’s contributed to significant progress: a 30 percent decline in the proportion of foster children who receive these medications since the first report was issued a decade ago.

In New York State, the City of New York and individual counties run child welfare, with some oversight from the New York State Office of Children and Family Services (OFCS). Even before Sheldon ordered the database in Florida, OFCS was recommending that the City and the counties do something similar.

A quality assurance plan is recommended to monitor the use of psychiatric medications in the out-of-home population. Agencies and districts are encouraged to develop a plan to obtain aggregate data on the use of psychiatric medications for children in their care … and routinely review samplings of individual records. Any concerns should be addressed through a process of continuous quality improvement.

Unfortunately, it was only a recommendation, not a directive.  Local agencies were free to ignore it.  And that appears to be what the New York City Administration for Children’s Services (ACS) has done. 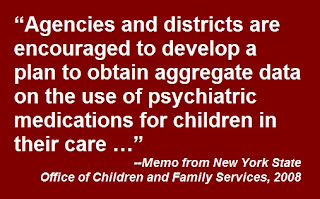 It’s not that they didn’t get the memo.  As recently as last year, a draft document proposing revisions to procedures concerning psychiatric medications makes reference to the existence of the memo – it even includes a link to the memo.

But though the ACS draft talks a lot about private agencies providing data about individual cases, there is no mention of creating a database to aggregate data to detect patterns and trends and see if ACS is making any progress in reducing the overmedication of foster children.

Worse, at a City Council hearing, ACS Commissioner David Hansell acted as though he couldn’t even get the data.  According to the Chronicle of Social Change:

“Currently, ACS does not have access to the data that the council is requesting, but we are advocating for access,” said[ACS Commissioner David] Hansell, who explained that the data is collected by the state’s Medicaid program within the Department of Health. “Once we have access to the information in this system … we believe that we would have much of the information the city council is looking for.”

Is it really that hard?

But OCFS made clear more than a decade ago that agencies like ACS should be aggregating the data themselves.  How hard can it be?  How about just going through the individual files and counting?  As I said in a previous post on this topic, ACS wants to be trusted with a predictive analytics algorithm to target families.  But why should we trust ACS with big data if it can’t even handle the ultimate in small data – simple addition?

In fairness to Hansell, he’s probably not the only ACS commissioner to fail here.  At the time the state memo was written, OCFS was run by Gladys Carrion. She established a strong record as a reformer – so strong that when he first took office in 2014, New York City Mayor Bill de Blasio named her to run ACS, where she did a far better job than Hansell has done.  But de Blasio forced her out because he needed a scapegoat after a high-profile tragedy.  He replaced her with Hansell.

I don’t know what, if anything, Carrion tried to do about this when she was running ACS.  Perhaps she tried and was stymied by the bureaucracy.  Or perhaps she never tried to follow her own advice.

But that’s no excuse for not following it now.

The City Council should pass legislation demanding that ACS compile the database.  And OCFS should turn its recommendation into a directive.