Here’s the answer: Pour millions more into a multi-million dollar facility that advocates knew would fail from the day it opened, instead of spending that money helping families.

Here’s the question: How does New York City’s Administration for Children’s Services propose to “fix” the hellhole it calls a “shelter”?

That’s what we found out thanks to a New York City Council hearing on June 24.  As the Chronicle of Social Change reports, to his credit, the chair of the Council’s General Welfare Committee, Stephen Levin, reminded everyone of something pointed out on this Blog in March:

Actually, they didn’t just fear it. As a prescient New York Times story made clear  they essentially predicted it – a prediction based on the appalling track record of children’s “shelters” all over the country.

The extent of the horrors is discussed in detail in the previous post, so I won’t repeat that here.  But this should give you a good idea: 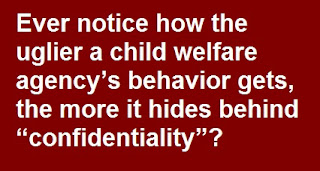 Betsy Kramer is director of policy for Lawyers for Children, which, as the name implies, is one of the groups assigned to represent children in child welfare cases.  She says ACS won’t even give her staff access to evaluate the living conditions of its clients at the shelter.  They claim that somehow it would violate the confidentiality of other children.  (Ever notice how the uglier a child welfare agency’s behavior gets, the more it hides behind “confidentiality”?)

You can’t fix these places.  The only solution is the one New York City came up with the last time its great big shelter became a hellhole: Shut it down.  But to do that, ACS Commissioner David Hansell would have to reverse the foster-care panic he has encouraged, creating a spike in needless removals of children from their homes.  That has led to overcrowding and other problems at the shelter.

Instead, Hansell has come up with still another in a long line of excuses, all of which boil down to: Hey, it’s everybody’s fault but mine!

As for “solutions,” as noted in that post in March, he wants to hire more “security officers” – in other words guards, making the institution even more like a jail.  Kramer said the new hires should be social workers instead.

In addition, the Chronicle reports, ACS says it will hire “95 new personnel” for the place.  Unless these personnel are simply replacing additional employees (which would seem pointless) “95 new personnel” will cost millions in salary and fringe benefits.  If ACS has that kind of money to throw around, the agency should use it on concrete help to ameliorate the worst aspects of poverty, which is so often confused with neglect.

Hansell was also in full buck-passing mode when it came to allegations concerning the misuse and overuse of psychiatric medication on foster children at the shelter and elsewhere in the system.

The City Council wants basic data on the use of such medication.  But Hansell – whose agency has legal custody of these children and can override parental objections to their medical treatment – claims his agency doesn’t have these data.  Only the state collects the information, he says, because foster children are covered by Medicaid and that’s administered by the state.

So at best, Hansell is saying his agency has no mechanism of its own to track how many children his agency has authorized to receive these powerful meds.

This is becoming a pattern when it comes to statistics that are embarrassing for Hansell’s agency.  Forthey finally admitted it’s 20 to 25 percent).
months ACS claimed it had no figure for how often children its caseworkers took away on their own authority – without asking a judge first – were taken for so little reason that the judge actually returned them home days later at the first hearing. When pressed

ACS is also one of the child welfare agencies that’s keen on using big data – that is, predictive analytics algorithms – to target families. But should we really trust with big data an agency that has so much trouble with small data?

If you need the music to think it over:

OK, here’s the question: For which failings of the agency that he purports to run, will David Hansell, commissioner of the New York City Administration for Children’s Services take responsibility?

And that’s why, ever since David Hansell become commissioner, New York City’s vulnerable children have been in more jeopardy.