A ProPublica Illinois story has urgent lessons for state lawmakers – including lessons about the real reasons children “known to the system” sometimes die.

ProPublica Illinois and the Chicago Sun-Times have published a searing in-depth report on the harm that has been done, for decades, to thousands of Spanish speaking families by the Illinois Department of Children and Family Services (DCFS).  The story, by reporters Melissa Sanchez and Duaa Eldeib is long, and it is worth every minute of your time.

It’s bad enough when children must endure needless foster care while their parents are forced to jump through endless, meaningless hoops.  It’s that much worse when the parents don’t even know what hoops to jump through because the marching orders are in a language they don’t understand.

Illinois promised to fix these problems – in 1977.  It signed a consent decree in response to a class-action lawsuit concerning failure to properly serve Spanish-speaking families.  It’s known as the “Burgos decree” after the family involved in the original case, Leopoldo and Iris Burgos. But, ProPublica Illinois shows, decade after decade, DCFS has violated the decree. 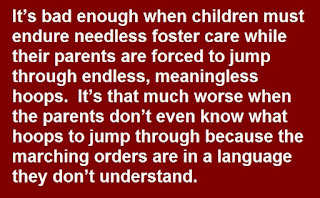 For the children, all of the trauma of separation is compounded when they can’t even communicate with their foster parents.  And if young children are left to languish in such homes, they may wind up speaking in a different language from their own parents.  At that point, the usually white, middle-class foster parents and/or the child welfare agency can play the “bonding card.”

Well yes, they may say, maybe we never should have taken the children in the first place, and we certainly shouldn’t have kept them all this time, but tough luck Mom and Dad, your kids have “bonded” with strangers.  And tough luck kids – you’ll never see your parents again, unless you can find them when you become adults.

I’ll come back to this part of the story below.  But first, the ProPublica Illinois story teaches another vital lesson. It’s about the real reasons for the horror stories that often drive child welfare policy – in many cases, driving that policy off a cliff.  These lessons are particularly important right now in Illinois, where one such horror story has prompted some lawmakers and others to scapegoat the state’s efforts to keep families together, almost certainly setting off a foster-care panic.

In fact, the real reasons for child abuse deaths have nothing to do with some Vast Family Preservation Conspiracy.  The real reasons are far more mundane: Workers who are poorly trained, underqualified, and often so overloaded with false allegations and cases in which family poverty is confused with neglect that they don’t have time to investigate any case properly.

And now, ProPublica Illinois’ reporting illustrates another reason – just as horrible because, like the others, it is so mundane: The workers didn’t speak the right language.

ProPublica Illinois examined reports from the office of the DCFS Inspector General and found three such cases.  Sanchez and Eldeib write:

One case involved a 6-month-old boy who died in a 2005 trailer fire in western Illinois. A DCFS investigator had previously visited the home with an interpreter and noted potentially hazardous space heaters. The investigator relied on the interpreter’s opinion that the space heaters were safe. Nobody warned the family about the risk, the father later told the Belleville News-Democrat.

“If they would have told us it was bad,” he said, “we would have gotten rid of them.” …

In another case, a DCFS worker who did not speak Spanish relied on a number of interpreters, including relatives, while investigating the abuse of an 8-month-old boy in 2004 in Aurora, a heavily Latino suburb west of Chicago. DCFS closed its investigation of the case, but the baby died a few days later after being shaken. His father was convicted of murder. …

In yet another case, no Spanish-speaking hotline operators were available in 2010 to take a call reporting suspected abuse of a 1-year-old girl. By the time the caller finally got through two days later and then, later still, an investigator checked in on her, the bruises had faded.

The girl died a few days later of suffocation and blunt force trauma.

But lawmakers can’t score cheap political points by promising to hire more Spanish-speaking   It’s so much easier, and cheaper, to invent a bogeyman -- efforts to keep families together – even though independent monitors, appointed in response to another lawsuit settlement, found that as Illinois curbed needless foster care, child safety improved.
caseworkers and interpreters.

Now, about playing the bonding card

ProPublica Illinois illustrates its story with three cases spanning generations: The original Burgos case that led to the consent decree, which started in 1972, a tragedy of needless removal from 1997, the year the Illinois system was at its worst thanks to a previous foster-care panic, and a case that began in 2014 and still is underway. 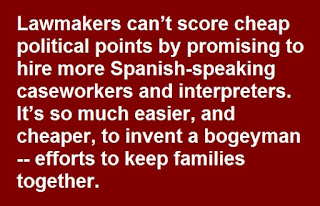 The latter case involves Jorge Matias, an undocumented immigrant from Guatemala. As the story points out, Matias has never been accused of abusing or neglecting his children.  His only “crime” was maintaining a relationship with the children’s mother, who was addicted to heroin.

When Matias’ first child was confiscated at birth he was placed by a private agency, Children’s Home & Aid, with foster parents Jana and Peter Palenik. They did not speak Spanish – and they chose not to speak English at home.  They spoke to the boy in their native language – Slovak.

Odds are there are very few native Slovak speaking children who are taken from their parents.  So the fact that these foster parents refused even to speak English at home should have immediately disqualified them, since, inevitably, this would make it harder for older foster children to communicate, and harder for the youngest children to maintain any relationship with their own parents.

It’s not clear when Children’s Home & Aid and DCFS found out about the foster parents’ Slovak-only policy – but caseworkers visiting the home should have noticed how the foster parents were communicating with the infant in their care.

Yet the child not only was not returned to the father from whom he never should have been taken, he was not moved to the home of relatives who say they were – and remain – willing to care for him.  He was not even moved to a foster home with Spanish-speaking strangers.  Then when Matias had another child by the same mother, that child also was placed with the Slovak speakers.  A third child was placed with Matias’ relatives. (By the time that child was born, DCFS was under fire from the Inspector General’s office for its handling of the case.)

A recommendation for TPR

As the children continued to bond with their Slovak-speaking foster parents, and because Matias wouldn’t throw the woman he loved under the bus, Children’s Home and Aid recommended termination of parental rights and awarding guardianship to the foster parents, who started talking about adoption.

It looked like things might finally change in July 2018, when the DCFS Inspector General – generally no friend of families – criticized the handling of the case.  According to ProPublica Illinois her interim report

indicated serious bias against Matias and an unnecessary delay in finding a permanent home for his children. The inspector general recommended that DCFS conduct its own review and decide if Children’s Home & Aid should be removed from the case. DCFS took over the case and opened an internal investigation into whether Matias’ Burgos rights had been violated.

But the next month, on the very day he was supposed to meet with his new caseworker, Matias was arrested by Immigration and Customs Enforcement.  According to ProPublica Illinois: “An ICE spokeswoman said agents had been outside his apartment building looking for someone else; they didn’t target Matias, who had no criminal record.” But Matias “still wonders if somebody involved in his children’s case reported him to immigration authorities.”

Three months later, Matias was deported to Guatemala. He wants his children to live with him there, and continues to fight for them in court, appearing via video link.

If his children can’t be with him, Matias said he’d like them to live with his relatives in Chicago, not with the Paleniks. “Maybe they were victims, too,” he said of the Paleniks. “But now they want to keep my children.” He fears that if they remain with the Paleniks, they will have an identity crisis later in life. “I want them to know their roots and their relatives,” he said.

A “pattern of biased decision-making”

In February, 2019, three months after Matias was deported, Acting Inspector General Meryl Paniak issued a final report on the case.  It was scathing.  Again from the ProPublica Illinois story:

[Matias’] case, she wrote, was perhaps worse than that of the original Burgos family. …Paniak wrote that “placing any child in a home from birth where they are not taught any language by which they can communicate with their family of origin violates the basic precept of child welfare.” …

The report revealed that Children’s Home & Aid determined Matias was an unfit parent based on unsupported assumptions, including describing him as “mentally ill or impaired” because he didn’t make enough progress toward getting his children back.

The inspector general also found that Children’s Home & Aid conducted excessive drug testing without cause. Matias had not been suspected of using drugs and, records show, never tested positive.

The inspector general recommended that Children’s Home & Aid reimburse DCFS for the costs of the drug testing and present a plan to address the “pattern of biased decision-making that pervaded in this case.”

But then it was time to play the bonding card.  Despite the fact that the prolonged foster care was the fault of DCFS and Children’s Home & Aid, and despite one instance after another of wrongdoing that caused the needless separation and trauma, the acting inspector general said there was a “dilemma” concerning what do to.

This is, of course, what bad child welfare agencies count on – playing the bonding card.  Indeed, Donald Trump’s functionaries are using the identical argument to keep apart some of the families they tore apart in the first place at the Mexican border. 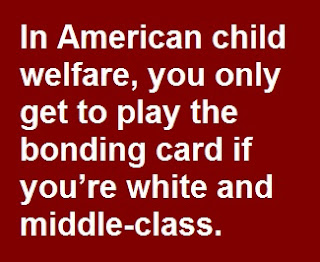 In fact, Matias has shown remarkable compassion and restraint concerning the Paleniks. There is nothing to indicate that he would deny the children ongoing contact with them were he to regain custody.  And, in the decades since the claims about bonding first became part of child welfare orthodoxy we’ve learned that bonding is more complicated than simply running a stopwatch.  It’s also become clear, as I discuss here, that in American child welfare, you only get to play the bonding card if you’re white and middle-class.

But regardless, there should be no dilemma here.  One of the things we owe our children is a just society.  In a just society no child need ever be afraid that when they grow up their children might be taken from them just because someone with more money and lighter skin wants to keep them for their very own.  We will never achieve such a society as long as child welfare agencies are allowed to play the bonding card in order to get away with doing whatever they want to poor families of color.

I'll close with a question I've posed before: If I kidnap your child at birth, flee to Mexico, take really good care of him, and then come back four years later, can I keep him?  Letting child welfare agencies play the bonding card amounts to giving them a license to steal poor people’s children.