A New York bill would ease the trauma for children whose parents’ rights have been terminated.


Imagine for a moment that, in those millions of cases in which parents divorce, we had a very different set of laws than exists today.

Suppose the laws worked like this: If the parents could work out their own custody and visitation arrangements, fine. But if they couldn’t, then courts would be required, automatically and in every case, to deem one of the parents “unfit.”  The children would be denied all contact with the “unfit” parent.  No visits. No phone calls. No video chats. Not even a birthday card.

There are, in fact, circumstances where a no-contact order is entirely appropriate after a divorce.  But a law that required this result in every situation where parents couldn’t agree obviously would do enormous harm to countless children.

Yet there is one situation in which this draconian cutting-off of contact between child and parent is the norm: Termination of parental rights.

In almost every state, when the state itself decides that a parent is unfit and terminates that parent's rights, all contact between child and parent is cut off.  The cutoff is immediate.  Even if the child is languishing in a foster home or a group home – with no adoption in sight – the parents become legally dead to that child.  That’s why, when such children never find a permanent home, they are known as legal orphans.

A handful of states do it differently.  No, they don’t require contact after termination of parental rights.  But they allow a judge to order such contact if the judge is persuaded that this would be in the best interests of the child.  The laws apply both in cases where children are legal orphans and cases where they have been adopted.

A bill now on the desk of Gov. Andrew Cuomo would add New York to these states.

The bill has the strong support of groups that defend families in New York courts – and they are family defenders not, as one news account claimed, “parents’ rights activists.” It also has the strong support of legal aid groups that represent children in child welfare cases – precisely because they recognize that such contact sometimes is in the best interests of children.

Indeed, the prime sponsor of the bill in the New York State Assembly, Assemblywoman Latoya Joyner, D-Bronx, was moved to sponsor the bill in part because of her own experience as a foster child. The prime sponsor in the State Senate, State Sen. Diane Savino, D-Staten Island, is a former caseworker.

Who opposes the bill? The usual suspects

So who is against the bill? Among others, of course, the trade association for New York’s private foster care agencies – for decades one of the nation’s more regressive forces in child welfare. (I still treasure a letter of complaint that group sent me when I was a journalist – in 1976.) 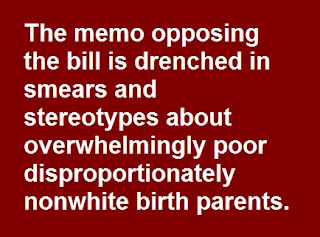 But also, the Upstate-based Adoptive and Foster Family Coalition of New York.  Once a relatively progressive force, they now are taking a position that puts the desires of foster and adoptive parents ahead of the needs of children.

I would like to think they don’t speak for most such parents, because their memo opposing the bill reveals some ugly truths about its authors. It is drenched in smears and stereotypes about overwhelmingly poor disproportionately nonwhite birth parents, and it wrongly implies that the bill somehow would make contact between children and their birth parents mandatory.

[I]nstead of being governed by the best interest of the child, instead of allowing the adults involved to work in partnership to best support the child they love, decisions would be driven by the wishes of the biological parent, who has shown through their choices and continued actions that they were unable prioritize [sic] or meet their child’s basic needs.

…despite being provided extensive support, services and legal representation, were unable to adequately stabilize their lives in order to provide a minimum sufficient level of ongoing care to their children.

This is false on every count.

For starters, the bill explicitly states that judges should only allow contact if it’s in the best interests of the child – exactly the criterion the foster and adoptive parents claim to support.

Second, the law would not ban voluntary arrangements between adoptive and birth parents – they are permitted under existing law.  But the bill might serve as an incentive to make adoptive parents more reasonable about reaching such agreements.  Right now, contrary to what is suggested in the memo, these agreements are not true “partnerships” because the adoptive parents have vastly more power.

Even worse is the stereotyping of all parents who lose parental rights.  Some are indeed unfit, and even contact with their children would be harmful to those children.  Others might be, as the memo says, unable to “meet their child’s basic needs” – but why is that grounds to terminate parental rights at all, let alone cut off all contact?

Even when parents are truly unfit to have custody of their children, it still may well benefit those children to maintain contact.  And everyone in child welfare knows that the line about “extensive support, services and legal representation” is the Disney version. In many cases, the termination was unjustified, the result of a stacked-deck system in which parents often get no help and no effective legal representation.

150 percent of other parents’ rights is a bit excessive

But the worst part of the memo is the part where the authors pervert an argument that advocates such as myself often have made in other contexts. They write:

This legislation contradicts the legal construct that adoptive parents are the legal parents under the law, imbued with 100% of the rights afforded to all parents, natural or adopted.

Adoptive parents should indeed have 100 percent of the rights afforded all parents. That’s why they should not be subject to any coercive intervention by child protective services agencies just because of their adoptive status – things like requiring them to present their children to mandated child abuse reporters, or special accounting requirements for adoption subsidies.

But they are not entitled to 150 percent of the rights of other parents.  And that, in effect, is what they have now in this most important area of all.

If this bill is signed into law it would give adoptive parents equal standing with divorced parents – no more, no less.

Because that’s what’s best for the children.