A government agency review of a child abuse death in Pennsylvania profanes the memory of the victim – Grace Packer – or as she always should have been known, Susan Hunsicker

Child welfare systems, and a lot of reporters who cover them, put a lot of faith in the concept of child abuse “fatality reviews.”  Get experts to look at what went wrong, the theory goes, and we’ll learn the lessons we need to stop these tragedies from ever happening again.

Journalists vent much outrage at the lack of such reviews and/or the failure to make them public – and in fact, if you’re going to do them, they should be public. But too much faith is put in “fatality reviews” as a tool for systemic reform.

That’s because the whole exercise is based on two false premises:

● First, it assumes that broad, general lessons can be learned from the most extreme, most aberrant cases.  In fact, a process of random case review would be vastly more valuable, since you’d be more likely to find out what typically goes wrong. Such a process also would be a constant reminder that the errors go in all directions, with some children left in dangerous homes even as many others are taken from homes that are safe, of could be made safe, with the right kinds of help.

● Second, it assumes that reviews are done by people with the same professional experience, the same outlook and the same general mindset as the people who screwed up in the first place will produce get fresh, useful insight – instead of a collection of boilerplate, blather and excuses. 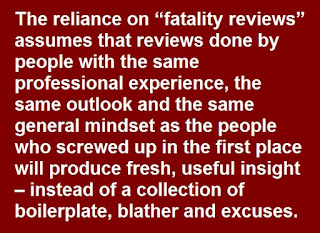 The failure of fatality review is most glaring when the agency is, in effect, investigating itself because the death occurred in a foster or adoptive home.

Case in point: A fatality review that actually profanes the memory of the child who died, a 14-year-old who was born Susan Hunsicker, but died as Grace Packer.

The facts of the case

When Susan Hunsicker of Norristown, Pa., and her brother were taken from their parents, Rose and Rodney Hunsicker, the ostensible reason was that her parents were not able to protect the children from abuse by others.

Apparently based on the assumption that they could do a better job of this, a county child protective services agency (or as they’re usually called in Pennsylvania, Children and Youth Services) placed the child with a foster mother who helped her husband rape the girl.  After the first rapist was convicted, she hooked up with a boyfriend whom she helped rape the girl again - and torture her, and murder her.

If the horrible facts sound familiar, but the name does not, that’s because, as I noted earlier, by the time she was raped, tortured and murdered her name was no longer Susan Hunsicker. It was Grace Packer.  Her foster mother, Sara Packer, had been allowed to adopt her and change her name.

There are two salient facts about Sara Packer. 1. She had a penchant for bringing child rapists into the   2. She worked for the private foster care agency that approved her as a foster parent – and placed Susan and a sibling in her home. 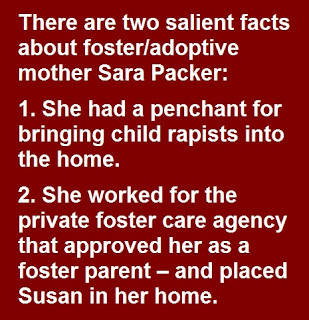 There is one salient fact about Rose and Rodney Hunsicker: They almost certainly could have raised their daughter safely with some help.  It can be said with absolute certainly they’d have done better than the system that took their children away from them.

As the Philadelphia Inquirer reported in 2017:

“[Their lawyer David Tornetta] said he came to know the Hunsickers as a loving couple who were unemployed but could have become better parents with some help. …"’I can't imagine what that young child went through," Tornetta said. "I guarantee you if that child had been in Rose and Rodney's care, it wouldn't have been anything like this. Nothing, nothing.

Tornetta told WHP-TV the parents jumped through all the hoops thrown in their path by child protective services.

But it didn’t matter.  The system wanted Sara Packer to have these children, and that’s what was going to happen.  So the Hunsickers’ parental rights were terminated.

How this affects the fatality review

As a result of all this, anyone who reviews the case has strong incentives to willfully blind themselves to the real issues.  That is what happened in the Susan Hunsicker fatality review. (Perhaps we can restore some of the dignity stolen from her by the review by at least calling her by her rightful name.)

The format of the document is odd – in effect, two reviews in one: one review done by counties involved in the case, the second done by the state, which simultaneously responds to the county review. Nevertheless, the report is remarkably revealing – but not in the way its authors intended.

The report reveals a system mired in minutiae and buck passing.  Over and over one reads recommendations that boil down to: Counties: You should do this. State response: We’re already doing it. If you don’t want to face the real issues, you point fingers at each other. 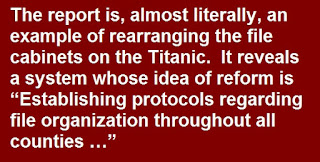 The report is, almost literally, a case of rearranging the file cabinets on the Titanic.  At one point it
reveals a system whose idea of reform is “Establishing protocols regarding file organization throughout all counties …” The state’s response to another recommendation: “[T]he Resources and Cross-System workgroup of the PA Child Welfare Council will be reviewing this matter.”

The recommendations themselves usually amount to little more than the equivalent of cutting and pasting from some manual somewhere about best practices. Were the circumstances not so tragic, the report would read like black comedy – something that might turn up in an episode of The Office.

Worst of all, of course, everyone overlooked the elephant in the room: Susan Hunsicker never should have been taken from her own home.  As long as CPS agencies don’t understand that children such as Susan Hunsicker can and should remain safely in their own homes with the right kinds of help, these tragedies will happen over and over.

It is sad but unsurprising that the reviewers gladly talked to caseworkers and supervisors but, apparently, never spoke to speak to Susan’s birth parents.  Were they too afraid of what they would learn?  Such an interview would seem particularly useful in light of one of the few findings from the county report that is useful:  “Reports provided to Lehigh County [by the private agency overseeing Susan’s foster care] contained many inaccuracies including wrong dates, and this misinformation was then reported as truth.”

Making matters worse, the counties, in their report, have the gall to whine about how “overwhelmed” they are.  But what’s overwhelming them is the deluge of false allegations, trivial cases and cases in which poverty is confused with “neglect.”

Recommendations that would make things worse

Some of the recommendations made by the counties in their report would make this worse.  They suggest toughening enforcement of penalties for “mandated reporters” of child abuse who fail to report anything and everything.  That will only further scare them into further overloading the system with false reports.  That will both increase the chances of more children needlessly removed from their homes – like Susan Hunsicker – and more children in real danger being overlooked.

Another recommendation seems to suggest in effect, that agencies treat enough false reports as, in itself, evidence of abuse or neglect. That would encourage more malicious reports, as in: “If I just call often enough, they’ll have to substantiate it!” Still another recommendation would needlessly slow down reunification.

It’s the same idiocy that led to passage of similar laws in the wake of the revelations of abuse by another Pennsylvania foster parent – Jerry Sandusky.

Then, having shown no vision, no insight into their own failings and no creativity about solutions, the county report says: Everything will be fine if you just give us more money! But Pennsylvania already spends on child welfare at the ninth highest rate in America –  even when rates of child poverty are factored in.

When the children are inconvenient – institutionalize ‘em!

But it gets worse still.

Having ignored the urgent need to keep children out of the system entirely, they actually recommend making it easier to use the very worst option for children – institutionalizing them. (Of course, they couldn’t know that this recommendation would become public just weeks after still another institution was exposed as a hellhole -- Pennsylvania’s own Glen Mills.)

But even when they’re not Glen Mills, Institutions don’t work --  except for CPS agencies. They can use institutions to get youth like Susan Hunsicker, whose problems the system did so much to cause in the first place -- off their hands and make them someone else’s problem.

And finally, it’s a good thing there have been detailed news accounts describing what happened in this case, because it’s impossible to figure out from the public version of this report. That part of the report has been redacted into meaninglessness.  In fact, trying to figure out what happened to Susan Hunsicker based on this report is like trying to understand the Mueller Report based on William Barr’s summary.

Laws such as the Child Abuse Prevention and Treatment Act put a lot of faith in fatality reviews. So does the execrable report from the so-called Commission to Eliminate Child Abuse and Neglect Fatalities.

But, as the report on the death of Susan Hunsicker makes clear, fatality review can be fatally flawed.
Posted by National Coalition for Child Protection Reform at 11:00 PM