UPDATE, NOV 12, 2018: THE WAIT IS OVER: To its great credit, the Chronicle has offered a full apology. I believe it is sincere.  As far as I am concerned, the slate is now clean.

Last week, The Washington Post ran a story about a negative campaign ad in which a Jewish candidate was portrayed as “holding a wad of cash in front of him, with a crazed look in his eyes.”

The story went on to list example after example of candidates using crude racial stereotypes:

In New York, Republicans have continually assailed a Democratic congressional hopeful’s decade-old rap career, despite his work as an attorney and a Rhodes Scholar.

In Georgia, Republican Brian Kemp used an ad with a tap dancer to show his opponent in the governor’s race, black Democrat Stacey Abrams, “dancing around the truth,” that was also criticized as having a racist undertone.

In Florida, a Republican official claimed that if black Democrat Andrew Gillum won the governor’s race, “his people” would be getting paid back for slavery. …

In California, Republican Rep. Duncan Hunter … has falsely accused his opponent, an American of Palestinian and Mexican descent, of trying to “infiltrate” the government and trying to “hide” family ties to terrorism.

Now, suppose, hypothetically there had been another example.  Suppose the article also had said:

In New Jersey, a white candidate for State Senate accused his opponent, a Black woman, of “wanting to raise your taxes so her people can waste the money.” The text was illustrated by an African-American buying expensive sneakers.

It would fit right in, wouldn’t it?  In fact, there is no such ad.

But now consider what actually did appear in a column for the Chronicle of Social Change – the Fox News of child welfare - last year.  The column, by the Chronicle’s one-time “Blogger of the Year,” Marie Cohen, criticized a New York Times story about foster care as the new “Jane Crow.”  In the process it dredged up the sneaker stereotype.

As I explained in a post to this blog last year:

Maisha Joefield thought she was getting by pretty well as a young single mother in Brooklyn, splurging on her daughter, Deja, even though money was tight. When Deja was a baby, she bought her Luvs instead of generic diapers when she could. When her daughter got a little older, Ms. Joefield outfitted the bedroom in their apartment with a princess bed for Deja, while she slept on a pullout couch.

Here’s how Cohen paraphrases that paragraph and comments on it:

Reporters Stephanie Clifford and Jessica Silver-Greenberg began with a description of Maisha Joefield, a mother who “splurged” on her daughter even when money was tight. For example, the reporters added helpfully, Ms. Joefield “bought her Luvs instead of generic diapers when she could.” It is odd to me that the authors seem to consider splurging on brand-name diapers, sneakers, or apparel to be an indicator of good motherhood.

Sneakers?  What sneakers?  The Times story never mentions sneakers – or any other “apparel” aside from the diapers.

I don’t know why Cohen brought sneakers into the discussion. I do know that there is a crude, pernicious racial stereotype that says African-Americans are poor because they waste money on expensive sneakers.

The element of bullying

More than a year later, in a tweet on Oct. 22 Chronicle Publisher and self-proclaimed “child welfare expert” Daniel Heimpel finally acknowledged that the column was “unfortunate” and they would “correct” it.

So, where’s the “correction”?  Either there is none, or there is, but it’s partially hidden. 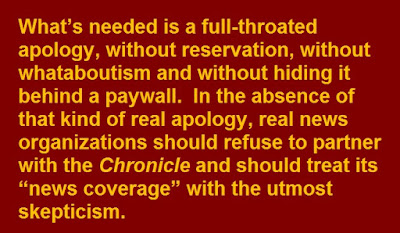 After being generally available for weeks, the original column was moved behind a paywall.  It’s possible that now there is a correction of some kind there too.  I’m not going to pay to find out.  But since the original column was fully public, any correction needs to be fully public as well.  In fact a correction is not enough.  What’s needed is a full-throated apology, without reservation, without whataboutism and without hiding it behind a paywall.  [UPDATE, NOV 12: AND TO ITS CREDIT, THE CHRONICLE HAS NOW DONE JUST THAT]

In the absence of that kind of real apology, real news organizations should refuse to partner with the Chronicle and should treat its “news coverage” with the utmost skepticism.

Was it subconscious bias?

There is one possible difference between the campaign ads and the infamous Chronicle column: As much as the campaigns may deny it, it’s clear that the dog-whistling in the ads was deliberate.  It’s possible that Cohen and the editors who reviewed her column and approved it for publication misread the original Times story and thought it really did mention sneakers.  In fact, I think that is the most likely explanation.  If so, that would make this a classic example of subconscious bias.

That would make the column, and in particular, the failure to apologize for it, no less reprehensible.  But it would add a certain extra irony to something else Cohen once wrote for The Chronicle:

“As a social worker in the District of Columbia, I was subjected to multiple low-quality, heavy-handed trainings that tried to help me discover my hidden biases.”

As I’ve said before, I don’t believe either Cohen or Heimpel is a racist. In fact, I think they both really want to help vulnerable children, even if they are wrong about how to go about it.

But we all have hidden biases.  Perhaps they should try another one of those “trainings.”
Posted by National Coalition for Child Protection Reform at 11:00 PM