There’s a pervasive stereotype – especially in Texas - about those of us who think there should be less coercive intervention into families. It goes like this:

If you want to take away fewer children you must be one of those right-wing extremists who doesn’t care if parents beat up their kids!  This stereotype has been reinforced for at least 20 years by the most prominent liberal in Texas child welfare -- a “Godsource” for Texas journalists -- who has crusaded endlessly to tear apart more families.  (I see no reason to name him here, but you’ll find plenty about him in the report we released about Texas child welfare in 2005.)

So mainstream media coverage consists almost entirely of the following “master narrative”: Texas spends too little on child welfare, the only mistake Texas child welfare makes is to leave children in dangerous homes, Texas should take away more children and anyone who thinks otherwise must be one of those right-wing spare-the-rod-spoil-the-child “parents rights” fanatics.

One of those themes actually is correct: Texas should spend more.  The rest is Texas-sized misrepresentation.  It misrepresents not only those of us on the Left, but also many smart, principled conservatives with whom I disagree on almost everything but who care passionately about protecting children and see that the current approach isn’t doing the job.

Greetings from the Family Values Left

But that stereotype also may explain some interesting findings about racial disproportionality in Texas child welfare, discussed in an excellent story that, itself, breaks the mold for Texas media.

The story, by Julie Chang of the Austin American-Statesman, reports that statewide, African American children are, proportionately, twice as likely to be torn from their families as white children.  But in the liberal bastion of metropolitan Austin, Travis County, they are eight times more likely to be taken away.

“I was really appalled when I saw [the data],”Aurora Martinez Jones, an associate Travis County district judge who oversees child welfare cases told the Statesman. She added:

“Ultimately, racism still exists, and it’s alive and well in Austin. We like to look at ourselves as a very liberal and progressive community, and we can be in a lot of respects, but ... people still haven’t acknowledged the implicit bias and explicit bias they may experience when interacting with other people in our community.”

Indeed, that progressive tradition actually might contribute to the problem. 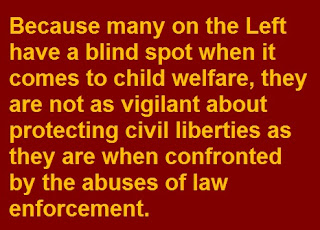 Because many on the Left have a blind spot when it comes to child welfare, they are not as vigilant   And because they see an intervention by Child Protective Services as benevolent, they are less sensitive to both racial and class bias, and more likely to needlessly call a child abuse hotline and trigger a child abuse investigation. Of course, all that winds up hurting the very children my fellow liberals want to help.
about protecting civil liberties as they are when confronted by the abuses of law enforcement.

But most notable is Chang’s refusal to simply accept the usual excuses from child welfare’s “caucus of denial” – those who insist that people in child welfare are so much better than the rest of us that they are magically immune from the racial bias that permeates every other aspect of American life.  As Chang notes:

Financial pressure in part caused by the rising cost of living, limited community resources such as affordable housing, and institutional racism drive the differences in Travis County, which have widened over the last decade, according to child welfare advocates.

In other words, it’s both the confusion of poverty with neglect and racial bias. The story also notes that

Other studies have shown that when controlled for income, African-American children are still more likely to be involved with CPS than their white peers.

This of course jibes with a wealth of other research that the denial caucus chooses to ignore.

But remember how I said one part of the media’s “master narrative” – the part about Texas spending too little on child welfare – is correct? That, too, is borne out by the Statesman story:

Advocates fear that the disparities will worsen with the loss of the state’s Office of Minority Health Statistics and Engagement, which had shared data with the child welfare agency but was shuttered Sept. 1 after the Republican-led Legislature cut funding.

But this also illustrates another point: Texas doesn’t just need to spend more, it needs to spend smarter, on everything from tracking racial bias in child welfare to actually doing something about it.

All of which leads Aurora Martinez Jones to conclude:

The rest of the media in Texas should pay attention.
Posted by National Coalition for Child Protection Reform at 11:00 PM