Late last year, The New York Times published a story about the frightening amount of power, and the frightening lack of accountability, among some of America’s county sheriffs. It included this example:

This year, the sheriff in Worth County, Ga., ordered his deputies to enter the local high school in search of drugs. They lined up 850 students with legs spread and hands against the hallway walls. Deputies inserted fingers into girls’ bras, and touched their underwear and genital areas while searching in their waistbands or reaching up their dresses, according to the Southern Center [for Human Rights], which sued the sheriff.

The deputies had no warrant or other authority to conduct the search, the suit charged. No drugs were found. … The Georgia sheriff was recently indicted in connection with the mass search and has pleaded not guilty. The lawsuit resulted in a $3 million settlement.

Wow. A $3 million settlement and criminal charges – charges that included a misdemeanor count of “sexual battery.”  Just goes to show what happens when advocates of civil liberties mobilize.  Even authorities with all that power can be held accountable.

A random sample of the nearly 200 comments on the story found unanimous condemnation of the abuses outlined in the story (of which the example above was only one) – not to mention a rush to blame it on political conservatives.

Now, consider a far more common infringement on civil liberties, as described by The New Yorker:

You will hear a knock on the door, often late at night. You don’t have to open it, but if you don’t the caseworker outside may come back with the police. The caseworker will tell you you’re being investigated for abusing or neglecting your children. She will tell you to wake them up and tell them to take clothes off so she can check their bodies for bruises and marks.

Even though this story described the rule, not the exception, there were no cries of outrage from civil libertarians. And the letters to The New Yorker in response to the story defended the people inflicting this infringement on civil liberties on defenseless children. 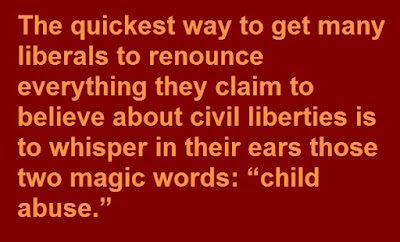 Because, of course, the people doing this to children were not sheriff’s deputies, they were – and are
– child protective services workers.  The differing responses illustrate, once again, that the quickest way to get many liberals to renounce everything they claim to believe about civil liberties is to whisper in their ears those two magic words “child abuse.” (The Left has no monopoly on hypocrisy – it was that great “family values conservative” Newt Gingrich who proposed confiscating the children of the poor and throwing them into orphanages.)

But for many on the left, call it a child abuse investigation and suddenly, behavior which in any other context would be sexual abuse is deemed acceptable. Behavior like this concerning a six-year-old:

The caseworker says that she needs to take pictures of Jackie’s body. Her mother, visibly shaken, again expresses discomfort, but the caseworker tells her “Oh, don’t worry. It’s more stressful for the parent than it is the child.”

Finding no basis to substantiate its concern that the child may have been abused, the state closes its case file.

Or consider the case in which these questions ultimately reached the U.S. Supreme Court (which ducked the issue) – a case in which NCCPR’s Vice President served as pro-bono counsel for the family:

Nine-year-old Sharon [not her real name] was removed from her classroom by school officials and escorted to another room in the school where she was met by two men, one of them a uniformed deputy sheriff carrying a gun.  They had no permission from any court; no neutral arbiter had decided first if what these men were about to do really was necessary.

For two hours Sharon was interrogated.  She was badgered relentlessly when she did not give the men the answers they wanted to hear.  She was too scared to leave the room, too scared even to ask for a glass of water.   She realized that the only way out was to lie.

Needlessly to say, Sharon was not a criminal.  On the contrary, the two men thought that maybe Sharon had been abused, and this seemed to them the most convenient way to find out.

But the botched interrogation led only to lies and confusion.  And it set off a cascade of error that caused even more trauma to Sharon including a stripsearch, a highly traumatic medical examination and several weeks consigned to America’s chaotic system of foster care.

Should “speculation and hearsay” really be enough?

In their own brief to the Supreme Court authorities in Oregon, where the case arose, actually said they should have the right to do this to a child based on – their words – “speculation and hearsay.”

Not everyone on the Left turned a blind eye. On the contrary, the case was notable for the fact that groups on the left, such as the Southern Poverty Law Center, the National Center for Youth Law, the Juvenile Law Center and many groups that represent children in child welfare cases as well as groups on the right such as the Family Research Council and the Eagle Forum filed “friend of the court” briefs supporting the family. 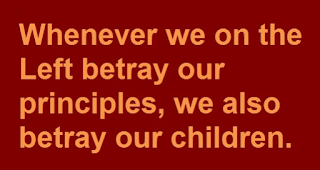 But there were some notable absences. The American Civil Liberties Union remained silent. (That’s not unusual. At the national level, when it comes to the notion of applying civil liberties to child welfare, the ACLU tends to be AWOL.)  The group that so arrogantly calls itself “Children’s Rights” does not seem to think those rights should include the ones covered by the Fourth Amendment. And the National Association of Social Workers actually submitted a brief supporting the nearly unlimited power to subject children to this kind of trauma.  (The Clinical Social Work Association, in contrast, stood up for the children.)

Meanwhile, in still another appalling case, in which girls were stripsearched in front of a male police officer, a lawsuit has been brought for the family by a conservative group, the Home School Legal Defense Association.

The intrusion doesn’t have to rise to the level of a stripsearch to be traumatic.  The questioning alone can traumatize a child, particularly a young child.  As three of the leading child welfare scholars of the 20th century, Anna Freud, Joseph Goldstein and Albert J. Solnit wrote, in calling for far higher standards before ever intervening in families:

Children react even to temporary infringement of parental autonomy with anxiety, diminishing trust, loosening of emotional ties, or an increasing tendency to be out of control.

The Baltimore Sun recognized this in an editorial cautioning against toughening “mandatory reporting” laws – even at a time when the pressure to toughen those laws was greatest, right after the crimes of former Penn State coach – and foster parent - Jerry Sandusky were exposed. As the Sun wrote:

Moreover, abuse investigations are inherently traumatic for children. They often involvehours of intensive questioning about sensitive issues of sexuality, shame and guilt as well as intrusive physical examinations that frighten and humiliate suspected victims. The stress brought on by such procedures can leave lasting emotional and psychological scars even on children who turn out not to have suffered abuse.

That kind of intrusion is the new normal for Black families. Arecent study found that 53 percent of African American children will endure a child abuse investigation before they turn 18.
Indeed, the very fact that the child welfare system targets almost exclusively poor families and disproportionately families of color helps explain the lack of outrage, especially in the media and among politicians. One can see that in Massachusetts when all of a sudden media and politicians did get outraged – when it happened to people of their race and their class: middle-class foster parents.

But that doesn’t explain all of it.  Stop-and-frisk targets the poor and it targets people of color. Liberals can be relied upon to be outraged by it. Yet many of the same liberals who will rise up in righteous wrath against infringements of the civil liberties of adults by law enforcement stand silent or, worse, defend the routine violations of children’s civil liberties in the name of “child protection.”

Similarly, some liberals who would never think it’s o.k. to throw a passenger off a plane just for speaking Arabic will gladly seek to instill paranoia in our children – and even promote the extremely dangerous practice of defensive driving – again, in the name of “child protection.”

After all, they will say, a child abuse investigation is different – it’s done to protect the child.  But infringements against civil liberties almost always are justified by invoking noble goals – that’s why defending civil liberties often is unpopular.  That sheriff in Georgia could argue that he, too, was simply trying to protect children – from the scourge of drug abuse.

All this explains why the due process protections we take for granted in most areas of law are largely absent in child welfare.  But whenever we on the Left betray our principles, we also betray our children.