Let the NYC family police teach you how to dissemble like a pro! 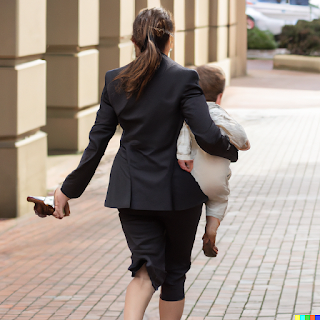 a first-of-its-kind organization that intends to engage in affirmative litigation with the [Administration for Children’s Services] —hitting it with lawsuits to potentially hold it accountable for allegedly violating families’ constitutional rights via heavy-handed investigatory and removal tactics.

“It is incredibly traumatic when government agents enter a person’s home and there’s the looming threat of a child removal,” [founder David] Shalleck-Klein told the Law Journal. “And of course, the harm is enormous when government agents do remove a child from a parent … sometimes in the middle of the night, in incredibly traumatic ways. Those harms stay with children.”

Of course, the reporter turned to ACS, the city’s family policing agency, for comment.  An agency flack ignored most of the abuses Shalleck-Klein mentioned, discussing only one, so-called emergency removals when the caseworker not only demands entry, not only interrogates the children and families, often in the middle of the night, not only stripsearches the children but also, on top of all that, tears the children from their parents on-the-spot without even asking a judge first, let alone having a formal court hearing.

The flack’s response is a one-paragraph masterpiece of dissembling and misdirection.  So let’s have a look, line by line.  The flack’s comments are in italics, followed by a brief discussion of each claim.

Actually, a comparison of data in the Mayor’s Management Report to ACS’ own data on removals suggests it’s more like 3%.  But assuming the flack is correct, what that really tells us is that a minimum of 98% of what ACS does is b------t.  The figure apparently is based on the total number of cases ACS investigates.  But overwhelmingly, these are so obviously false they fail to meet even the minimum standards for a caseworker to check a box on a form declaring the case “indicated.”  Almost all of the rest are cases in which family poverty is confused with neglect.  In short, the workers spin their wheels, and the families suffer all sorts of trauma, for nothing.

The more relevant figure is: When ACS decides to take the child and run, how often do they do it without even asking a judge first?  The answer is not 2% it’s more like fifty percent.

and happen only when our highly trained staff

Highly trained? All you need is a bachelor’s degree in any number of fields, a minimal amount of relevant coursework, and a six-week training course.  You are then empowered to tear children from their homes on-the-spot. 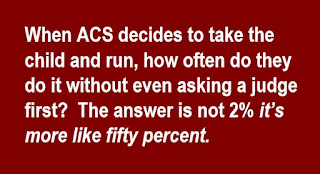 Except that they get it wrong astoundingly often.  Consider: At the very first hearing, families have no real chance to mount a defense – it’s usually not until this hearing that they even meet their lawyers.  They stand before judges who know they can rubber-stamp ACS thousands of times and, though it will do terrible harm to the children, the judges are safe.  But if they send one child home and something goes wrong, their careers may be over.  And yet, despite all that, they still overrule ACS’ “highly trained staff” 20 to 25% of the time and send the child right back home.  That suggests the proportion of cases when judges should do that is far higher. Oh, and one other thing: In America police – even the family police – are supposed to make their decisions based on evidence, not on their feelings.

ACS is committed to keeping families together whenever that is safely possible and, in the vast majority of investigations, children are not removed from their homes.

Our robust continuum of family support services has successfully led to a 36% reduction in the number of children entering foster care from 2017 to 2021,

with foster care now at all-time low of less than 7,200 children.

But that doesn’t mean families are left alone.  As the Movement for Family Power points out, as  foster care has declined, there’s been almost a one-for-one increase in oppressive family surveillance that, itself, inflicts needless trauma on children and families.

So thank you ACS flack.  Your refusal to accept responsibility for the harm the agency does shows exactly why organizations like the Family Justice Law Center are needed.

Posted by National Coalition for Child Protection Reform at 2:54 AM