When “child welfare” oppressors demand that the oppressed be nice to them, it’s just one more form of oppression

No one should be required to “be nice to people who do despicable things.”

Every year, the Kempe Center for the Prevention and Treatment of Child Abuse holds a four-day virtual extravaganza featuring more than 100 panels and speakers from around the world.  In the past, this event was essentially a garden party for the child welfare establishment.  But Kempe is one of the few organizations that’s actually changed, instead of just engaging in reputation laundering.  For the past few years, they’ve been inviting a lot of us skunks to their garden party.  Martin Guggenheim was a keynoter this year.  Dorothy Roberts was a keynoter last year. I’ve given several presentations.

But, much like a school lunchroom, the skunks tend to go to the skunk-led panels and the child welfare establishment types tend to stick to the garden parties. Occasionally they meet in the same virtual room. That’s when things get especially interesting.

Take, for example, a mostly skunk panel on Oct. 4 called “The Myth of Benevolence.”  It began with this question from the moderator:

What is the historical context of [the myth of] benevolence that is bound up in the child welfare system as we know it today? 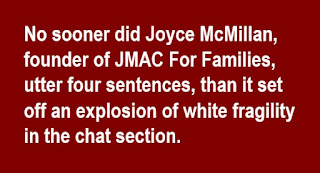 No sooner did Joyce McMillan, founder of JMAC For Families, utter four sentences, than it set off an explosion of white fragility in the chat section. McMillan explained that the myth of benevolence shows itself when people in the system say:

Asked to elaborate, she said:

People who work within systems may have gotten there with good intentions, but at some point you have to learn and realize what the outcomes are.

But before she’d even had a chance to say that second part, someone posted in the chat something to the effect of “white person???  Clearly this is not the training for me” and declared that s/he was leaving. (I didn’t copy it down, but that was the gist.)

Then came someone else with this comment, which I did copy down exactly:

“I’m curious how shaming and blaming is curative for child welfare?”

I’m going to dwell on that one for a couple of reasons.  First, this comment didn’t come from some new, naïve caseworker.  It came from a while person who, to use Joyce McMillan’s phrase, “got there with good intentions” and stayed for a long time, becoming a high-ranking official in a family policing agency, and a prominent defender of those agencies.  So it’s no wonder she was upset when McMillan spoke truth to her power.

Now, consider what family policing agencies actually do to families that are overwhelmingly poor and disproportionately nonwhite.

They demand entry to homes, sometimes in the middle of the night.  They put the home under a microscope, poking through drawers and cupboards and asking both the parents and the children the most intimate questions about their lives. They stripsearch children.  They make parents pee into cups.  They make them take anger management and parent education courses so they can find out what bad parents they are and what they must do to get better.  They pore over reports from therapists. They poke and pry, examine and constantly grade parental behavior.  And that’s even when they don’t walk right out of the house carrying the children with them into the night. 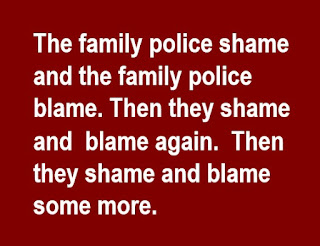 But when once – just once - someone who the system attempted to shame and blame mercilessly dares to talk back, dares to say that, as a matter of fact, family police aren’t doing God’s work, the commenter says, in effect:  Ohhhh, poor me! You’re shaming and blaming!

Offensive as such a demand is, family preservation advocates actually did that in the 1990s.  Faced with constantly being accused of essentially not caring if children die, and faced with one family police establishment misrepresentation after another, too much of the movement responded by playing nice – never mentioning racism, and just trying to somehow talk up the virtues of keeping families together without mentioning the enormous harm done by the alternative.  The result: The family preservation movement almost niced itself to death.  And we wound up with hideous laws like the so-called Adoption and Safe Families Act.

We’re not making that mistake again.

Respect must be earned

The general demand for niceness has been a problem at the Kempe conferences.  There are efforts by moderators to persuade the skunks to be more, well, moderate; attempts to smooth things over and make us all play nice.  Even the evaluation questionnaires ask you to agree or disagree with the statement “The presenter(s) were respectful and inclusive of other’s opinions, experiences, and thoughts.”  But sometimes, being “nice” is just passive aggression – as when presenters at a garden party “conversation circle” took almost the entire time for themselves and disabled the chat.  There was nothing "respectful" or "inclusive" about that, but the garden party presenters did it "nicely," speaking softly and smiling.

As Prof. Guggenheim said many years ago, it’s so very wearying to “constantly have to be nice to people who do despicable things.”

Civility toward individuals is one thing; that’s an entitlement. [UPDATE, OCT. 15: Or maybe not. Lexie Gruber-Perez, who knows a lot about reputation laundering, sent me a link to this article making the case that in some circumstances, demands for civility also can be a form of oppression.  Here's an excerpt:

In 1934, Henry Cadbury, professor of biblical literature at Bryn Mawr College and an official of

the American Society of Friends, called for Jewish Rabbis to speak civilly to Adolf Hitler and the Nazis. Discussing issues in a civil tone, Cadbury insisted, would build bridges with persecutors and would be a more effective policy than resistance.

As already intimated, for those who experience oppression, the tone one uses in communicating may offer a way to vent, to tell the truth, or to loudly proclaim one’s humanity. Robin DiAngelo explains, “It’s like if you’re standing on my head and I say, ‘Get off my head,’ and you respond, ‘Well, you need to tell me nicely.’ I’d be like, ‘No. Fuck you. Get off my fucking head.’” While tone might be a tool of self-survival for the marginalized, I submit that charges of incivility on the part of the dominant may appear to be about tone yet are really about the message.]

But respect must be earned.

Similarly, there has been a lot of talk about the need for “truth and reconciliation” in family policing.  But some of those making that call misunderstand the process.

When, after at last freeing themselves from the tyranny of apartheid, South Africa’s new government, led by Nelson Mandela, created a Truth and Reconciliation Commission, all those white racists didn’t confess to committing atrocities because they decided not to be white racists anymore.  They confessed because the alternative was going to jail.

Sometimes what the child welfare establishment calls truth and reconciliation is just another form of reputation laundering.

I won’t presume to suggest when there’s been enough truth to allow for reconciliation in family policing.  Only those who have been oppressed can render that judgment.  But I know this: No one should demand that anyone be nice to people who do despicable things.

As for shaming and blaming: After decades of dishing it out, family police, you’re just going to have to take it. Accept the blame, feel the shame -- and do something about it.

Posted by National Coalition for Child Protection Reform at 3:02 AM