“Child welfare” caseworkers don’t have a right to lie – but do they have what amounts to a right to retaliate against families who fight back? A federal appeals court leaves that door wide open 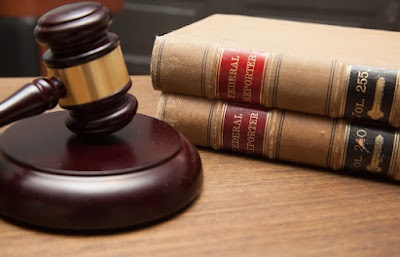 Perhaps you remember the case, from California, in which a caseworker claimed what amounted to a constitutional right to lie.  They argued that the judicial doctrine of qualified immunity meant they couldn’t be sued even if they lied to a court in order to get the court to approve removing a child from her mother.

In what was aptly described as an “epic dis” the Ninth Circuit Court of Appeals made clear they did not buy this.  In general, the Ninth Circuit has taken a careful, nuanced look at the issue of qualified immunity – which means that some government workers are immune from any lawsuit concerning their official actions unless those actions violate a “clearly established” constitutional right.

But over in the Eighth Circuit, which covers Missouri, Arkansas, Iowa, Minnesota, Nebraska and the Dakotas, it may be a different story.  No, they didn’t say caseworkers have a right to lie.  But they may well have what amounts to a right to retaliate against families who dare to fight back. 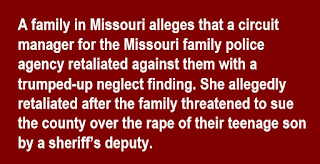 A family in Missouri alleges that a circuit manager for the Missouri family police agency, called the Children’s Division, retaliated against them with a trumped-up neglect finding. She allegedly  retaliated after the family threatened to sue the county over the rape of their teenage son by a sheriff’s deputy.  They sued in the United States District Court for the Eastern District of Missouri.  As first noted on Eugene Volokh’s blog, the Eighth Circuit Court of Appeals overturned the lower court and ruled that, even if the allegations in the suit are true, the circuit manager is immune from liability.

The facts of the case

In Scott County, in Southeast Missouri, on the Illinois border, Brandon Cook, then a deputy sheriff, knew the teenage son of one of his colleagues.  He allegedly groomed the boy through something called the Sherriff’s Explorer program and via the Grindr App.

Then he raped the boy.  He was convicted of felony statutory sodomy.

The boy’s parents notified the county they planned to sue for damages.  Ultimately there was a settlement.  But before the case could be settled, the family would have to endure even more.  The parents were accused of neglect.

It’s not clear who called in the report, but it’s clear who investigated. Spring Cook,* circuit manager for the county office of the Children’s Division.  Cook arrived at the family home with two highway patrol troopers and someone from the local “Juvenile Office” – a bizarre fifth wheel, unique to Missouri, that sometimes runs its own parallel investigations in family policing cases – and which has a reputation for being even harder on families than the Children’s Division.

According to a lawsuit filed by the family against Cook, because the Children’s Division and county sheriffs work so closely together, when an allegation involves a sheriff’s employee, it is customary for the investigation to be transferred to another county.  But Spring Cook allegedly refused to recuse herself.  She also allegedly told the father she would “get” his peace officer’s license, making it impossible for him to work in law enforcement.

Cook “substantiated” neglect.  According to the district court ruling:

On January 7, 2019, Cook made a preliminary finding under a preponderance of evidence standard of parental child neglect. Cook’s finding was based on the following three incidents:

Let me interrupt right here to emphasize that one: Cook found that the parents were neglectful because someone else -- a law enforcement officer and colleague of the boy’s father -- raped the boy.

Now, back to the court ruling:

(2) the son’s Facebook messaging about sex and alleged sexual abuse by another adult, a local Tae Kwan Do instructor (“Instructor”); upon learning of the abuse, Plaintiff Father confronted the Instructor while Plaintiffs’ daughter and her friend were nearby in a car, the Instructor responded by assaulting Plaintiff Father; Plaintiff Father de-escalated the situation by not responding with physical force and retreating; Plaintiff Father did not report the assault; and (3) a benign, age-appropriate out-of-state date the minor son went on with his mother’s permission.

Cook focused her findings of neglect on the fact that Plaintiffs allowed the minor son—who was sixteen at the time—usage of the internet on his iPhone, and permitted him to drive a vehicle across state lines to go on an age-appropriate date.

The Juvenile Office, which, as noted above, has a reputation for being even harsher on families than the Children’s Division, disagreed.  So did the Highway Patrol.

But that didn’t dissuade Cook.  Her decision to substantiate the neglect allegation meant that unless they successfully appealed, the parents would be listed on the state’s central register of alleged child abusers forever. That would bar the father from working in law enforcement and bar the mother from returning to her career as a teacher.

The second level of appeal is to an administrative tribunal where the deck still is stacked against families, but at least they’re not hearing appeals of their own conduct.  That tribunal overturned the neglect finding and the family was cleared.

Plaintiffs allege they were subject to an investigation by the FBI concerning “substantially similar charges” regarding their minor son in March 2020. Plaintiffs believe that two FBI agents visited Spring Cook’s office. One of the FBI agents then questioned Plaintiffs’ daughter at length about the minor son’s sexuality and sexual conduct.  Plaintiffs’ daughter was told that she was the only member of the family who was known by “the authorities” to be cooperative. The FBI never followed-up with any other family members, and eventually closed the investigation. Plaintiffs allege that Spring Cook contacted the FBI in frustration that the [administrative tribunal] did not substantiate her earlier allegation and/or in retaliation against Plaintiffs.

So, just to review:

● The Juvenile Office found no neglect.

● The Highway Patrol fund no neglect.

● The administrative hearing found no neglect.

● The FBI found no neglect.

So the parents sued.  They cited multiple violations of their rights.  The district court, unfortunately, dismissed many of their claims.  But it upheld their right to sue on grounds that, if Spring Cook retaliated against the family for threatening to sue, she violated their First Amendment rights.

Cook argued that even if the allegations against her were true, she was protected by the same immunity doctrine that the California workers attempted to invoke.

The District Court saw the absurdity:

The question, therefore, is whether a reasonable official might have believed that it was permissible to make findings of child neglect in retaliation for parents making claims against county officials related to the sexual abuse of their child. Under clear Eighth Circuit precedent, the answer is no.

But the Eighth Circuit Court of Appeals disagreed.  They concluded that families have no “clearly established” right to be free from retaliation by the family police if they exercise their First Amendment rights.  So, they ruled, Cook’s actions in investigating the family and substantiating the neglect allegation are protected by qualified immunity.

As for her decision to rubber-stamp her own conclusions when the family appealed – for that, they said, she’s covered by another judicial doctrine invoked less often: absolute immunity!

In the absence of relief in the federal courts, states should provide a means of redress (unless of course they really want the family police to be free to retaliate against families.  The Missouri Legislature (and its counterparts in the rest of the Eighth Circuit – Arkansas, Iowa, Minnesota, Nebraska and the Dakotas) should pass laws stating clearly that initiating and/or substantiating a child abuse allegation as an act of retaliation is a violation of a family’s rights and any such family has grounds to sue in state courts.

There also are some key questions for Missouri officials:

● Has any agency of Missouri state government looked into the allegations made by the parents in this case?  If so, what were the findings?

● Are there any plans to change policies concerning actual or perceived conflict of interest – such as requiring that complaints against people with whom a given Children’s Division office works closely be handled by a different office?

*-Although the lawsuit notes at one point that “Defendant Cook and the minor son’s abuser share a last name” there is no allegation that they are related.

Posted by National Coalition for Child Protection Reform at 12:10 PM