Bow down before “the arbiters of child safety”!!! (If you ever want to see your children again.)

Most of the time, the columns that longtime “child welfare” establishment apparatchik Paul DiLorenzo, writes for The Imprint, are just dull regurgitations of establishment talking points. But his most recent column is, in its own way, fascinating.

For decades, in hundreds of news stories, when confronted with the needless removal of a child, the family police (a more accurate term than “child welfare”) have said some version of “We don’t decide whether to remove children.  A judge has to approve everything we do.”

Everyone in family policing knows that’s bullshit.  Everyone knows it bears no resemblance to the facts on the ground. But it took Paul DiLorenzo to admit that the system really does have absolute power to surveil families and tear them apart.  And DiLorenzo goes further.  He demands that the system fight to keep its hands at the throats of these overwhelmingly poor disproportionately nonwhite families.  In a paragraph otherwise notable only for its self-pity, DiLorenzo writes:

After four decades of service in child welfare, I thought I had read and heard just about every disparaging thing possible from the external critics of our work. Mostly, we’ve sucked it up, quietly tolerating everyone’s fair and unfair observations. We’ve paid dearly for not doing our jobs well. In that whole time however, we have remained the arbiters of child safety, even as others tried to demean us, treating our profession like a thrift store clearance bin. It would never be wise for us to let go of our grip. [Emphasis added.]

It’s curious that the worst analogy DiLorenzo can come up with for his noble profession is to a place where poor people sometimes have to buy their clothes.  Also: "We've paid dearly for not doing our jobs well"?  No. Children and families have paid dearly for "child welfare" not doing its job well. But most important:

You heard the man!  We decide your family’s fate!  And don’t think for a second we’ll let anyone take away our power!

Almost every week there is another example of how children are harmed by this enormous power Examples like this.  And this.  And most recently this.

DiLorenzo’s refreshing candor comes toward the end of a column that, at first, looked like it would be just another example of the Big Lie of American “child welfare” – the false claim that child removal equals child safety and child safety and family preservation are opposites that need to be balanced.  According to the Big Lie, if you don’t want to surveil and tear apart families in massive numbers you must care more about “parents’ rights” than children’s safety.  As always this ignores the mountain of evidence concerning the emotional trauma of foster care, the high rate of abuse in foster care itself, and how overloading the system with false reports and poverty cases steals time from finding the relatively few children in real danger.

Oblivious to all of this, oblivious to the harm of using a Fox News-style caricature of social justice, and oblivious to how offensive it is for a fundamentally racist system to paraphrase a statement widely associated with Dr. Martin Luther King, Jr., DiLorenzo begins this way:

The arc of best intentions in child welfare appears to be bending away from child safety. Our fresh obsessions include rebalancing the scales of social justice and assuring we do no harm to parents.

Should our desire for balancing the scales of justice trump good practice for child safety?

So, is DiLorenzo saying the only way children can be safe is if the system is unjust?

DiLorenzo appears to have been triggered by a story in The Imprint about the failure of legislation in Minnesota that would turn a current recommendation that, during abuse investigations, children be interviewed separately from their parents (as already apparently happens in the vast majority of cases) into a mandate 100% of the time.  Citing a story in The Imprint, he writes:

I was reminded of [the arc allegedly bending the wrong way] as I reviewed the current debate in Minnesota on whether children should be interviewed alone or in the presence of parents following the allegation of serious physical or sexual abuse.

But DiLorenzo misrepresents the position of the bill’s opponents. 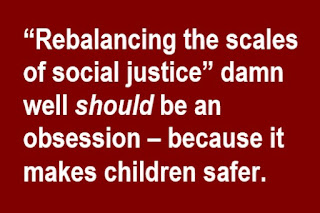 No one in the story suggests that children be interviewed in the presence of their parents when the allegation is “serious physical or sexual abuse.”  Rather, while giving extensive attention to those who share DiLorenzo’s view, the careful, finely-nuanced story also quotes those who believe there is a need for discretion in some low-risk cases.  As the story explains:

“It automatically puts the agency and parents in an untrusting adversarial relationship from day one,” Woolman said. “Surprises like this, when there aren’t serious safety concerns, have the opposite effect of helping to keep kids safe. Parents are scared the state is going to take their kids and when there’s no trust, it’s very difficult to establish the type of partnership needed to address the family’s needs.”

Later in his column, DiLorenzo offers up an even more extreme misrepresentation, claiming that “some people want to eliminate individual interviews” [emphasis added].  In fact, no one in the Imprint story suggests any such thing.

And, by the way, current policy in Minnesota has not prevented the state from tearing apart families at one of the highest rates in the nation, and having one of the worst records in America for racial bias in family policing.

All of this illustrates that yes, just as Paul DiLorenzo says, the family police are the arbiters of what happens to families.  It also illustrates why we must keep fighting to force them to let go of their grip.

And “rebalancing the scales of social justice” damn well should be an obsession – because it makes children safer.

Posted by National Coalition for Child Protection Reform at 3:13 AM