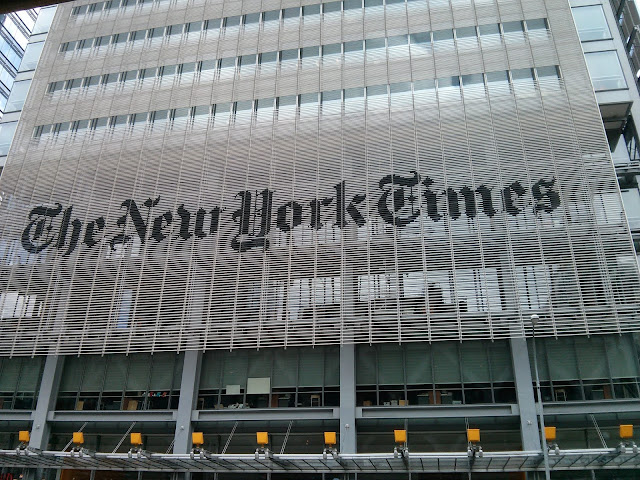 A story full of hype and hysteria is written by a reporter with a disturbing track record.

Even as other major national news organizations, from the Associated Press, to The Marshall Project to Bloomberg CityLab have written careful stories debunking the whole “hidden pandemic of child abuse” myth, The New York Times has fallen for it - bigly.

The theme of a Times story today is a little different from the usual. Most fearmongering stories say the sky is falling because of a drop in calls to child abuse hotlines.  The Times story focuses on another side effect of the coronavirus. Its thesis boils down to: Oh my God! Children are being horribly abused because selfish caseworkers and their evil union have cut back on in-person visits, thereby preventing the same level of intrusion into the homes of overwhelmingly poor, disproportionately nonwhite kids as occurred before COVID-19.

UPDATE, AUG. 25, 2020: That evil union had to hold a vigil yesterday to honor a child protective services caseworker who died of COVID-19 - apparently as a result of doing exactly what the Times story demands.

The story does this by using the ugly recipe that has characterized the worst child welfare reporting for decades.

Step 1: Find a horror story.  After digging through piles of data in a state that investigates 360,000 reports of child abuse every year, the lead reporter, Garrett Therolf, found what he wanted:  A child known-to-the-system whose death may have been due to the failure of a county child protective services agency to make in-person visits.

Step 2: Extrapolate from this one fatality using vague phrases such as “scores of investigations into allegations of abuse or neglect have been delayed or sharply curtailed during the pandemic.”  (The story offers no evidence that any of these delays actually endangered a child.  And, in a state that, again, investigates 360,000 allegations per year, “scores” isn’t very many.)

Step 3: Extrapolate further by telling us that “One in seven children is reported to a [California] child abuse hotline by age 5 ...”  The juxtaposition of the horror story and the figure leaves the impression that one in seven California children is the victim of horrific abuse – and now they’re all going unnoticed because of those selfish caseworkers who won’t visit them and their awful union that is backing them up.

In fact, the one-in-seven figure is for calls to a child abuse hotline in California, nothing more. We know that, nationwide, 91 out of 100 of those calls is a false report and most of the rest involve the confusion of poverty with neglect.  We also know that all the time wasted on false reports, trivial cases and the confusion of poverty with neglect leaves workers less time to find children in real danger.

The second key problem is the latest twist on the classic failure of both the child welfare system and a lot of journalism about child welfare:  the failure to balance harms.

In this case a vivid account of neglect and death is contrasted with vague concerns about COVID-19 – written in a way to suggest that only caseworkers are at risk if they march through homes, and that these caseworkers and their evil union are putting their selfish interests ahead of the children.

But let’s imagine what might happen if we did it the way reporter Therolf seems to prefer: The same level of intrusion, the same level of poking and prying through bedrooms, cupboards, refrigerators, the same long, personal interviews with family members, the same stripsearching of the children.

ompounding the problem: The Times should have been more careful when it decided to contract out some stories in California.  They contracted with the Investigative Reporting Program at University of California Berkeley Graduate School of Journalism, where the child welfare stories are written by Garrett Therolf.

Therolf has a disturbing track record dating back to when he was a reporter for the Los Angeles Times, a record that includes accusations that he sometimes may have made stuff up; accusations he denies.

The concerns about Therolf were well described in this 2010 story from the Los Angeles online news site WitnessLA. That story fleshes out reporting by Daniel Heimpel, now the publisher of the child welfare trade journal The Imprint.

One of Therolf’s last stories for the Times was actually an attack on the whole notion that there is racial bias in child welfare – a story that went out of its way to demean scholars whose work demonstrates such bias.

Then he moved to Berkeley, where he built a career out of fearmongering stories that exploit horror story cases.  That work includes a notorious Netflix documentary in which he showcases one of the most extreme proponents of a take-the-child-and-run approach to child welfare, Elizabeth Bartholet, and promotes the Orwellian use of predictive analytics in Pittsburgh’s child welfare system.

The turmoil in American journalism brought on by the collapse in advertising revenue has led to all sorts of partnerships and collaborations that, in the past, would have been unthinkable. Many of them have resulted in excellent work.

But The New York Times is one of the few legacy news organizations that has thrived amid the chaos. It can afford to be more careful in choosing its partners.

Posted by National Coalition for Child Protection Reform at 1:26 PM