(See? Who says Left and Right can’t work together?)

Among the nation’s governors it would be hard to find one whose botched the response to coronavirus worse than Florida’s own “mini-Trump” Ron DeSantis.

He locked down too late, reopened too soon, bragged about the reopening – and helped turn his state into an epicenter of the pandemic.  Chris Cuomo https://youtu.be/LZ2OHfUAZcM on June 30: “Ignoring a pandemic doesn’t make it go away.”

But DeSantis didn’t learn from any of this. Now he is pushing, fanatically, to reopen Florida schools.  He even threatened to cut off all state aid to a school district that simply proposed to delay in-person classes by one month.

But before you say: “Well, what do you expect from that right-winger?,” consider: His most effective weapon in pushing this dangerous agenda is a trope created and spread mostly by a bunch of liberals – the American child welfare establishment.

DeSantis exploited what has become a standard liberal-created, media fueled – and racist – master narrative: Now that fewer mostly white middle class professionals have their “eyes” constantly on overwhelmingly poor disproportionately nonwhite children, their parents supposedly will unleash upon their children a “pandemic of child abuse”?

Yes, the pandemic is putting more stress on everyone.  But why do we rush to assume that for poor people in general and poor Black people in particular the only way they’ll cope with it is to beat up their children?

The myth continues to spread, even after news organizations such as the Associated Press, The Marshall Project and Bloomberg CityLab debunked it.  And in Florida, Prof. Robert Latham, Associate Director of the University of Miami School of Law Children and Youth Law Clinic,  and child welfare’s best number cruncher, has pored over the data and posted the results on his blog. He’s found no evidence for a pandemic of hidden child abuse in Florida. 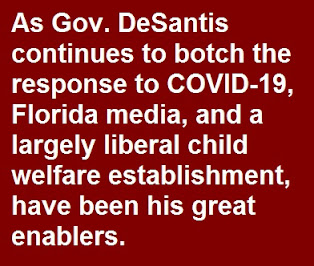 But who cares about facts?  When Ron DeSantis wanted the perfect excuse for opening schools, all he had to do was whisper the magic words: “child abuse.”  Or as a headline in the Orlando Sentinel put it: “DeSantis touts return to school to counter suspected rise in child abuse amid coronavirus.”

Actually, he got his secretary of the Florida Department of Children and Families, Chad Poppell to do the touting at a media event in Sarasota.  According to the Sarasota Herald Tribune Poppell said:

There are concerns that keeping children out of school will lead to abuse cases going unreported.

“We’ve been going for five-plus months; it is horrible to think about a child stuck in a (abuse) situation” for that long, Poppell said.

There is, of course, no evidence that any more children are actually stuck in an abuse situation than before. And in fact, more children in real danger may be discovered because what are being “lost” are largely false reports, trivial cases, and cases in which family poverty is confused with “neglect.”

But it didn’t stop there.  Florida First Lady Casey DeSantis chimed in with the claim that in March, when the pandemic began, the number of children who were subjects of calls to Florida’s child abuse hotline was 20,000 lower than in March, 2019. Said Ms. DeSantis:

“20,000 less [sic] individuals being reported to the child crisis hotline. That’s 250 school buses packed full of kids one right after the other, that’s how many kids are not getting a chance to tell their stories.”

Or as public radio station WFME put it in its own breathless headline: “In Florida, 20,000 Fewer Children Got Help for Abuse, Neglect at the Start of the Pandemic.”

Amazing how much misinformation you can pack into a single headline: National data suggest that at least 91 percent of those children were not abused or neglected and most of the rest probably had their poverty confused with neglect.  But WFME declares all their parents guilty, and all the children abused or neglected.  As for the “got help” part, that’s not what the child welfare system does. It’s a policing system.

It is far more likely that 20,000 children were spared the enormous trauma of a needless child abuse investigation, while workers were given time to find the very few in real danger.

So while Florida media have been careful to note that, why yes, there are dangers in opening schools in the middle of a pandemic, they have accepted without so much as a hint of skepticism the governor’s most potent argument for reopening schools: The false narrative that the typical impoverished nonwhite parent is more of a danger to her or his own children than the coronavirus.  (Even this claim is not limited to the right. Self-proclaimed liberal Prof. James Dwyer claims schools never should have closed at all!)

As Gov. DeSantis continues to botch the response to COVID-19, Florida media, and a largely liberal child welfare establishment, have been his great enablers.

Posted by National Coalition for Child Protection Reform at 10:03 PM