Study shows how even when everyone wants the system to work, it leaves families worse off.

There’s a new study out by Dr. Kelly Fong, now a professor of sociology at the Georgia Institute of Technology. Dr. Fong’s graduate work at Harvard included a study of mothers in Rhode Island who are scared away from seeking help due to mandatory child abuse reporting laws, something I discuss here.

. Fong has a new, even more extensive study out. For this one, she effectively “embedded” with the Connecticut Department of Children and Families, doing more than 100 interviews with caseworkers, family members and mandated reporters.  The result is an indictment of our entire overpoliced, surveillance-state approach to child welfare. 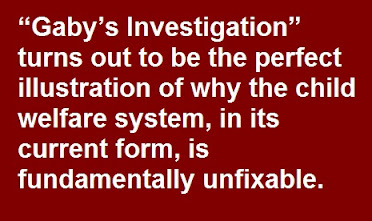 People will probably be tempted to read only the plain-language summary published by the Council on Contemporary Families. But I hope readers won’t stop there.  The middle portion of the full study, published in the American Sociological Review, where we read about some of the families caught up in the system, is great journalism.  It starts on Page 11 with the section called  “Gaby’s Investigation.”

That case turns out to be the perfect illustration of why the child welfare system, in its current form, is fundamentally unfixable.

As you read that part of the study, consider:

● This study was done when Connecticut was a rapidly improving system with good leadership.

● The mandatory reporter who turned in Gaby meant well.

● The investigation was conducted by a caseworker who was experienced, smart and empathetic.

● The amount of intrusion into the family was the bare minimum possible when agencies such as Connecticut DCF intervene.

And yet, the family still was left worse off.

That is the theme throughout the study.  You can’t fix child welfare just by getting rid of the kind of caseworker who thinks it’s funny to wear a T-shirt emblazoned with the words “Professional kidnapper” – as happened in Arizona last month.

In fact, the biggest lesson from the study is simply this: The notion that people working for an agency with the power to take away children can ever really “take off the investigator hats, and put on our services and support hats,” as one child welfare administrator in Michigan put it, is a self-serving myth.

The helping function in child welfare needs to be separated from the policing function.  And the helpers must be exempt from our failed system of mandatory reporting.