● The court overturned the termination of a family’s parental rights, and ordered that the case start over.

● The court also ordered the CASA program, and the county Superior Court – which it called “a biased tribunal” -- cut off from any involvement in the case.

● But through it all, the National CASA Association has taken no public action against the program. Click on the audio to get a good sense of National CASA’s response:

To read all about the Snohomish County CASA Scandal, see these previous posts to this Blog.

UPDATE AUGUST 28, 2019 The Office of Juvenile Justice and Delinquency Prevention is "looking into" the Snohomish County CASA scandal.  OJJDP helps fund CASA programs. Their response comes less than 24 hours after the law firm that first exposed the scandal filed a complaint. Details here.
UPDATE, AUGUST 18, 2019: The Everett Herald has an excellent story about the whole Snohomish County CASA scandal, with a clear step-by-step overview of what happened.

Of course court officials, who were instrumental in causing the problems and turned themselves into what an appellate court called a “biased tribunal” now claim they’ve fixed everything. In other words, the foxes have doubled the guard on the henhouse.

But the most striking part of the story is this: The Snohomish County Court system says that it “increased training [for CASAs] to, among other things, stress honesty, truthfulness and the correct way to handle documents.”

Now. one might be able to make a case that there is something complicated about handling documents.  But what does it say about the inherent nature of CASA that it can so corrupt the ethics of good people that they actually need training to know they’re supposed to be honest and truthful?

The problem with the scandal at the Court-Appointed Special Advocates (CASA) program in Snohomish County, Wash.,*  is that court decisions describe so much misconduct and it’s so awful that it’s hard to know where to begin.

So perhaps it’s best to begin here: Everything discussed below is documented in the public record – not in assertions by parties, but in decisions by a judge; decisions that run to hundreds of pages.  And now, we can add three more judges and 29 more pages.

On Monday, an appellate court panel ruled unanimously that there was blatant bias, not just on the part of the CASA program but also the Snohomish County Superior Court (which, at one point actually declared itself and the CASA program effectively one-and-the-same). 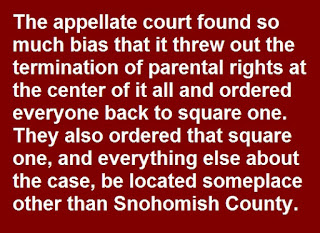 The appellate court found so much bias that it threw out the termination of parental rights at the center of it all and ordered everyone back to square one.  They also ordered that square one, and everything else about the case, be located someplace other than Snohomish County.

heard oral argument on the motions in Snohomish County and relied on a record generated in that biased tribunal in making his decisions.  For that reason the orders [he] entered … do not escape the taint of bias and must be vacated.

It started with CASA

It all began with the CASA program.  So we should begin with a reminder, from a previous post, of what CASA is all about.

CASAs are minimally-trained amateurs, overwhelmingly white and middle-class, who are sent out to investigate overwhelmingly poor disproportionately nonwhite families. Then they recommend to the judge whether the children should be separated from those families, sometimes forever. Judges typically take the advice.

The most comprehensive study ever done of the program, a study commissioned by the National CASA Association itself, found that it does nothing to make children safer. The study also found that CASA prolongs foster care and reduces the chances children will be placed with relatives instead of strangers.

One CASA program saw no problem when a performer at a fundraiser dressed in blackface, another CASA program fell apart as soon as it had to confront issues of race. A law review article called CASA “an exercise of white supremacy.”

And for many years, the Snohomish County program used a volunteer who would go on to write a vile screed about the parents he investigated (and another vile screed about Muslims). They are so awful Donald Trump would probably tweet them if he knew about them.

In the case at the center of the scandal, an African-American child was placed with a white foster family days after birth.  And it appears that, from day one, the CASA assigned to the case would do anything to keep it that way, including leaking confidential documents to the foster family. 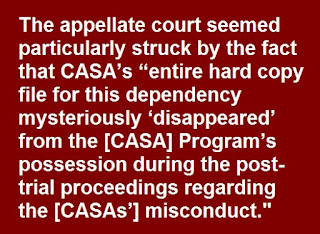 Another CASA infiltrated a listserv for family defense attorneys to learn about their strategy. (“Infiltrated” isn’t my word; it’s from a decision by Judge Anita Farris, who presided over the case. Judge Farris was praised by the appellate court for acting with integrity throughout.)

But it didn’t stop there.  Judge Farris found that the CASA program conducted a campaign of threats and intimidation against the parents’ lawyers.

And Judge Farris used another word – one she had not used in her entire judicial career until this case: Perjury.  Judge Farris ruled that  the program engaged in “the blatant withholding and destruction of evidence … rampant, continuing lying …” and “pervasive and egregious” misconduct.

entire hard copy file for this dependency mysteriously “disappeared” from the [CASA] Program’s possession during the post-trial proceedings regarding the [CASAs’] misconduct.

The appellate court decision only scratches the surface of the misconduct.  There is more detail, and links to Judge Ferris’s decisions in this previous post and this one.

Thumb on the scales of justice 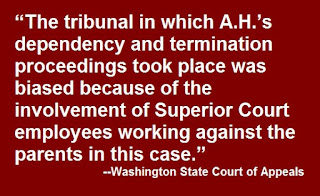 But it didn’t stop there.  The family wasn’t just up against a CASA program that engaged in what Judge Farris called “pervasive and egregious” misconduct. They were up against a court system that did everything it could to help the CASA program win this case, putting a giant thumb on the scales of justice.  Eventually, the Snohomish County Superior Court claimed that it and the CASA program were essentially one-and-the-same – and that forced Judge Farris to recuse herself.

Somewhat oddly, she still ruled in favor of termination of parental rights, apparently concluding that even disregarding the CASA program’s behavior there was reason to do so. But the appellate court disagreed, finding that the behavior of the court system and the CASA program made a fair trial impossible.  But that was the only area of disagreement.  The appellate court did not dispute any of Judge Farris’ findings about CASA or the Snohomish County Superior Court.  On the contrary, citing precedent that “unchallenged findings are verities on appeal” the appellate judges wrote this:

Here, Judge Farris displayed no personal bias and attempted to conduct an unbiased proceeding. But the sticky wicket is that the tribunal in which A.H.’s dependency and termination proceedings took place was biased because of the involvement of superior court employees working against the parents in this case. … And Judge Farris entered many unchallenged findings of fact in her recusal order and memorandum decision…

All of this led the judges to rule, in effect, that the Snohomish County Superior Court,  by taking sides at all, let alone siding with a CASA program that Judge Farris found engaged in “pervasive and egregious” misconduct is, itself, so biased that it should not be allowed anywhere near this case.

The court ordered a new trial in another county, and the appointment of a new lawyer for the child.

Most media failed, too

All this, of course, challenges the master narrative of most Washington State media. They cling to the view that all parents who become enmeshed in the system are at best sick and at worst evil, and send the message that foster parents, CASAs etc. can do no wrong.  That explains why with the exception of some excellent reporting from Seattle television station KING, the scandal has been ignored. [UPDATE, AUGUST 18: As noted above, the Everett Herald has now done an excellent story.]

Even worse is the behavior of the National CASA Association. The Snohomish program describes itself as “an associated member of Washington State CASA and National CASA.”

So listen again to the functional equivalent of what we’ve heard from National CASA about this scandal:

So, does National CASA have a problem with one of its associated members behaving this way or not?

What about the other cases?

What is to be done about all those other cases?

*-Although it has always been a CASA program, for many years it called itself a Volunteer Guardian ad Litem (VGAL) program.  It’s the same thing, and the program has long been an associated member of National CASA.  It now calls itself a CASA program, but the appellate court decision still uses VGAL.
Posted by National Coalition for Child Protection Reform at 9:00 PM