● Their public face is all about how they don’t even think about money (except that they wish they had more of it to help those poor, helpless children, of course.) But when they think we’re not listening the talk is all about “capital” “revenue” and “equity portfolios.”

● And when they think we’re not listening they admit that tens of thousands of children warehoused in institutions don’t need to be institutionalized.


Discussions about financial incentives in child welfare usually revolve around incentives for governments.  Sometimes that discussion is oversimplified with claims that governments “make money on foster care.”

Actually they don’t.  But the reality is almost as bad. A series of perverse incentives lead to a situation in which governments sometimes lose more money by helping a family than they lose by just consigning the children to foster care – even though the help for the family costs less in total dollars.  So even though governments don’t literally make money on foster care, there are financial incentives to misuse it and overuse it.

Another set of perverse incentives encourages quick-and-dirty slipshod adoptive placements, by paying bounties for every finalized adoption over a baseline number.  Even when the adoptions fail, the states still get to keep their bounties.  There is no similar incentive for reunifying a family.

But there is another set of even worse incentives that gets far less attention: incentives for private agencies. Such agencies typically provide most of the worst, and most expensive forms of “care” – group homes and institutions. In some states and localities they also oversee foster homes.

These agencies typically are paid for each day they hold a child in their care.  So of course, they have a profound incentive to encourage needless removal of children and then hold them in foster care for a long, long time.

This does not mean that your typical private agency leader is like Montgomery Burns on The Simpsons, gleefully rubbing his hands each time another child is placed in his group home or institution.  Rationalization is powerful. So the group home industry, (a term that encompasses all forms of “congregate care” from your basic group home to your “residential treatment center,”) convinces itself that, contrary to a massive amount of evidence, the children really, truly benefit from being institutionalized and really, truly have to be in their care for a long, long time.

(The term group home industry itself was coined by the director of a residential treatment center who had a crisis of conscience and had to fight the industry when he sought to vastly reduce institutionalization and emphasize services to children in their homes or foster homes.)

Nonprofits can be greedy, too

The various components of the group home industry are typically, though not always, nonprofit organizations.  That’s a big blind spot for journalists.  Reporters are trained to be skeptical of government and of big corporations. But there is surprising naiveté about the so-called “independent sector.”  But the will to survive can induce in nonprofits a form of greed that is as corrosive of common decency as the worst corporate behavior.

And that brings me to a column written by Jennifer Jones and Theresa Covington, two leaders of the so-called Alliance for Strong Families and Communities.  That’s one of those Orwellian names so-beloved in child welfare. It’s actually a trade association for human services agencies, including many that run group homes and residential treatment centers.

Writing in what they apparently consider their safe space, the Chronicle of Social Change, they effectively admitted that what really concerns many of their members is: Money, money, money.

The column deals with the so called Family First Prevention Services Act. They claim that “One of the areas that will be most impacted [sic] by the bill is residential care.” (In fact, that part of the law is so strewn with loopholes that, unfortunately, the “residential care” industry is unlikely to be impacted – or even affected – much at all.) They go on to write about how they’re conducting “a series of cohort initiatives to help inform and advance a transformational shift …”

But two elements of the column are striking. First, this trade association that includes so many residential treatment providers admits, in writing, that a huge proportion of the children their members have institutionalized don’t need to be in institutions.

“Therapeutic Residential Care,” as it is known, focuses specifically on providing treatment for youth who have a mental health diagnosis or have experienced trauma and need help regulating their emotions. … However, according to recent data, more than 4 in 10 children who are currently in residential care have no mental health diagnosis, medical disability or behavioral problem that would warrant such a setting. [Emphasis added.]

… Recent research suggests that young children living in residential programs are at a higher risk for developing physical, emotional and behavioral problems. These young children are also less likely to be placed in a permanent home than those who live in foster care.

The “recent research” comes on top of the vast store of research that has told us as much for a long, long time. Back in 2005, Shay Bilchik, who then was running another trade association for agencies that has an Orwellian name, the Child Welfare League of America, admitted that they lack “good research” showing residential treatment’s effectiveness and “we find it hard to demonstrate success...”

What’s new is that now the so-called “Alliance” is admitting it as well, and suggesting that tens of thousands of institutionalized children should not, in fact, be institutionalized. (The 4 in 10 number is an underestimate. There is no evidence that residential treatment is successful for any population – but, hey, it’s a start.)

So, what is it that is stopping the Alliance’s member agencies from abandoning this largely worthless endeavor?  After all, these agencies tell us over and over that their only concern is the best interests of the children, and they don’t even think about what the agencies themselves need.

But now Jones and Covington tell a different story:

This shift requires residential providers to make significant changes in policy, practice, budget, historical programming and organizational culture. The growing evidence base continues to point to this change movement as being in children’s best interests and necessary, yet providers continue to seek out clearer and more efficient pathways to understand this new reality and make this transformation a reality.

Translation: We might be willing to do this, but only if we don’t lose any money, or, God forbid, go out of business.  Money first, kids second.

Jones and Covington cite figures from one of their member agencies indicating that residential treatment brings in a disproportionate share of its revenue. And, they write,

Many child welfare providers and operators of residential treatment facilities have a tremendous amount of equity and capital in their physical structures and campuses and a large portion of their organizational identity is encompassed in their role as residential providers.

Translation: If we do what’s best for the kids, where will we get our money?  We’ve got all that equity and capital to think about!

It can be challenging for leaders and board members of these organizations to still deliver on their stated mission when such a large part of that mission is being transformed. 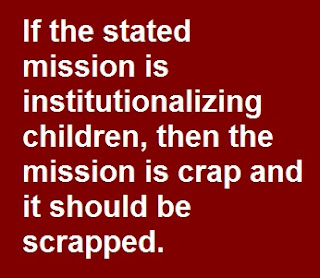 But if the stated mission is institutionalizing children, then the mission is crap and it should be scrapped.

Child welfare providers are among the oldest community-based nonprofits in the country, with a significant number of them owning and operating facilities that began as orphanages more than a century ago.

And finally, Jones and Covington tell us:

These physical campuses make up a large part of their equity portfolio and many organizations are hesitant to make the leap to repurpose or divest these resources.

If all they care about is what’s best for the children, as they keep telling us, they should be thrilled to follow pioneers such as Children’s Village, EMQ Child and Family Services and Youth Villages which all have dramatically altered their mission to put far more emphasis on services in children’s own homes, in foster homes.

Unless of course, what they really care about is self-preservation.

Meanwhile, back at the whine cellar …

And, of course, no column by a trade association of providers would be complete without whining about how they don’t get enough money for whatever it is they provide. So, Jones and Covington write:

The theory of change represented within the [Family First] bill requires a robust array of home- and community-based services, yet there was no federal funding put in the bill to help states build up that part of the system. So, state legislatures and local governments are going to need to make further investments into developing this part of the system in order to keep children in the least restrictive, most family-like settings.

Actually, that’s not quite true. As the authors note in the same column, Family First does include some funding for reforms. It allows money once limited to substitute care to be spent on better options – though the options are severely limited, so very little money actually is likely to be available.

Institutions are not just the worst form of care, they’re also the most expensive.  So pretty much anything else you do for a particular child will cost less than institutionalizing the child. So all you need to do to “make further investments” in better alternatives is to take the state and local money you would have spent to institutionalize children and spend it on those better alternatives.

That is, if all those concerns from agencies about “capital” “revenue” and “equity portfolios” don’t get in the way.
Posted by National Coalition for Child Protection Reform at 11:00 PM