Were CASA’s slogan honest it would be: “The voice of white privilege in Court” 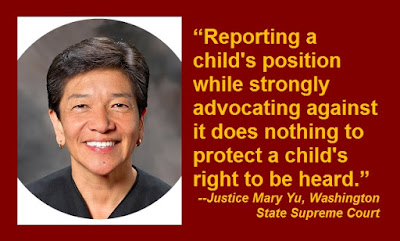 A publication on the website of the National Court-Appointed Special Advocates (CASA) Association says that the group was created to be the “child’s voice in court.”

Some local CASA chapters use “a child’s voice in court” as their slogan.

Others opt for “Lift up a child’s voice.”

But a scathing dissent by a state supreme court justice makes clear that, in many cases, that claim simply is not true.

The dissent itself did not criticize CASA, but in the course of describing what a CASA does, and does not do, it exposes a misrepresentation at the heart of the program.

CASAs are overwhelmingly white overwhelmingly middle-class amateurs sent into the homes of people who are overwhelmingly poor and disproportionately of color.  The amateurs then tell judges what decisions to make and, to a frightening degree, the judges rubber-stamp the recommendations.  Yet, though CASAs almost always mean well, their only real “qualification” typically is their white, middle-class status.  So it’s no wonder a law review article aptly argued that CASAs  “give voice to white supremacy.” 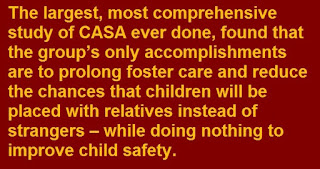 The problems with this should be obvious – and I don’t just mean assorted scandals and other issues involving CASA chapters, which I’ve recapped here and at the end of this post.

The largest, most comprehensive study of CASA ever done, a study commissioned by the National CASA Association itself, found that the group’s only accomplishments are to prolong foster care and reduce the chances that children will be placed with relatives instead of strangers – while doing nothing to improve child safety.  The trade journal Youth Today concluded that CASA’s efforts to spin the study findings “can border on duplicity.”

But all the while, CASA has been passing itself off as speaking for the child. Much of the time, it does no such thing. And that’s where the judge’s dissent comes in.

A case from Washington State

The case comes from Washington State and it involves the issue of when children should have a real voice in court – that is, a lawyer who will fight for whatever the child wants.  In Washington State appointment of such lawyers is discretionary.  In a recent decision the State Supreme Court upheld this arrangement.  But in a dissent, Justice Mary Yu argued that the state constitution requires that lawyers be appointed for all children in child welfare cases.

In the course of making her argument, she exposed a misrepresentation at the heart of CASA.

The mandate of a CASA is to advocate for whatever the CASA thinks is in the child’s best interests.  So if a child wants to go home and the CASA thinks it’s best for the child to remain in foster care (or vice versa) then the CASA actually would be violating Washington State law if she were “the child’s voice in court.”

The CASA is required to advocate for what she thinks is best even when that means effectively silencing the child.  And, it appears, that’s often what happens.

Justice Yu made that clear in discussing one of the cases on which the court ruled.  The child, known as E.H., is now about ten years old, more than old enough to make his preferences clear. His mother is in jail, but will be released next year. Justice Yu writes:

E.H.'s position was (and remains) directly at odds with the position of his CASA and the State: E.H. wants to reunite with his mother, while the CASA and the State argue that termination of parental rights is in his best interests. When the court denied appointed counsel … E.H. was erroneously deprived of his right to be heard.

Although E.H. cannot reunite with his mother right now, she is scheduled to be released in July 2019, when E.H. will still have almost half of his childhood ahead of him. In the meantime, he is in a stable placement with foster parents who are willing to serve as long-term guardians for him. He has maintained a close relationship with his mother, and she has made every possible effort to remain an important part of his life. …

E.H. thus has a clearly stated position favoring reunification, and there is no apparent reason why that outcome is not a reasonable possibility in accordance with the law of this state.

The trial court noted that the CASA, though "somewhat leery," reported E.H.'s stated position to the court in accordance with her statutory duty. … However, the position of the State and the CASA, that termination is in E.H.'s best interests, directly conflicts with E.H.'s stated desire to reunite with his family.

The CASA is required to represent and advocate for termination in order to comply with her statutory duties, but termination and reunification are mutually exclusive outcomes. … No one could possibly advocate for both at the same time. The CASA's assessment of E.H.'s best interests therefore make it impossible for her to represent his position.

The standard answer from CASA apologists is that the CASA also is supposed to tell the court what the child wants – even when she advocates for the opposite.  And in this case the CASA did just that.

But I wonder how many people suggesting that is enough for children would say it was enough if they were on trial. 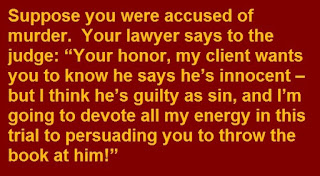 Suppose you were accused of murder.  Your lawyer says to the judge: “Your honor, my client wants you to know he says he’s innocent – but I think he’s guilty as sin, and I’m going to devote all my energy in this trial to persuading you to throw the book at him!”

Anyone who considered that an adequate defense really would be not guilty – by reason of insanity.

Or, as Justice Yu put it: “reporting a child's position while strongly advocating against it does nothing to protect a child's right to be heard.”

She cites alarming data suggesting that’s what happens most of the time.  According to one study CASAs in Washington State presented actual arguments in support of the children’s position only 30 percent of the time.

And, Justice Yu noted, when a child has no one vigorously advocating for what she or he wants, it undermines the pursuit of that child’s “best interests.” In a reminder that should be heeded by judges across the country, she writes:

Trial courts cannot ascertain what is in the child's best interests by simply deferring to a CASA's … position. Courts must instead consider the positions of all the parties and reach their own conclusions.

The trouble with CASA: A brief recap

There have been so many problems and, sometimes, scandals.  Here’s a list:

● There’s the study, commissioned by National CASA itself, that found the program prolongs foster care and reduces the likelihood that children will be placed with strangers instead of relatives – with no evidence that it improves child safety.

● There’s the conclusion from the trade journal Youth Today, that CASAs efforts to spin the study findings “can border on duplicity.”

● There’s the scandal surrounding the CASA program in Snohomish County, Washington, where a judge found “pervasive and egregious misconduct.”

● There’s the matter of the former CASA for that same program whose diatribe about the overwhelmingly poor disproportionately nonwhite parents the program sees would make Donald Trump blush.

● There’s the CASA program in Kansas that held a fundraiser that featured a blackface act.

● There’s the CASA program in California that fell apart over a simple request that volunteers be more diverse.

So it’s no wonder a law review article argues that CASA is “exercise of white supremacy.”

And see also our overview: The Case Against CASA.

Posted by National Coalition for Child Protection Reform at 11:55 AM