The likely next leader of the child welfare system in Pittsburgh co-authored an appalling defense of foster care. She’s also considering stamping a “scarlet-number” predictive analytics risk score on children at birth.

I’ve written often about the dangers of the latest fad sweeping through child welfare, “predictive analytics.”  The idea is to use an algorithm to predict which parents supposedly are likely to abuse their children. Proponents say it reduces human bias. In fact, it magnifies human bias and gives it a false veneer of objectivity.  It is the nuclear weapon of child welfare.

So it’s no wonder that the most prominent proponents of predictive analytics also are those who are most fanatical about wanting to tear apart more families – and often those most deeply in denial about the problem of racism in child welfare. The predictive analytics cheerleading squad is led by people such as Elizabeth Bartholet and Richard Gelles, and Gelles' principal disciple, Naomi Schafer Riley.

Indeed, it is very hard to find anyone who supports this kind of computerized racial profiling who is both a real advocate of family preservation and does not run a child welfare system.

For those who do run such systems, the temptation can be irresistible.  That brings us to Pittsburgh and surrounding Allegheny County, Pa. That jurisdiction is the only one I know of where predictive analytics is up and running. (Similar efforts in Los Angeles and Illinois failed spectacularly.) The Pittsburgh experiment has been the subject of numerous gushy tributes from people like, well, Naomi Schaefer Riley – and one real critique, a chapter in Virginia Eubanks’ book, Automating Inequality, excerpted in Wired.

In Pittsburgh, when a call alleges abuse or neglect, an algorithm known as the Allegheny Family Screening Tool (AFST) mines a vast trove of data on the accused and coughs up a “risk score” for the child.  Like an invisible scarlet number, the child will wear that “risk score” for life – even if the original report on the parents was false.

So when the child  grows up, if she herself becomes the target of a child abuse report, that high scarlet number from her childhood will count against her, making her look like a “higher-risk” parent – because supposedly, she was at “high risk” as a child.

The argument made by backers AFST boils down to this: Our system is run by really good people. Marc Cherna, the longtime director of the county Department of Human Services, has a solid track record for curbing needless foster care.  He has promised to use predictive analytics only in limited and responsible ways. In other words, you can trust him with nukes.

To which I and others have replied:

What about Cherna’s successor, and his successor’s successor? Any system that depends for success on the benevolence of a single leader with near-absolute power is too dangerous for a free society.Most of those pushing for the use of systems like AFST are nothing like Marc Cherna. On the contrary, they tend to be those most enthused about taking away more children and using algorithms to accomplish it.

As Eubanks reveals in her book, Dalton is the author of an email disclosing that the county is considering introducing “a second predictive model … [that] would be run on a daily or weekly basis on all babies born in Allegheny County the prior day or week.” Such a model already exists — indeed it’s one of the models the designers of AFST proposed to the county in the first place.

In other words, Dalton is seriously considering a plan to stamp that scarlet number on every child in the county – at birth.  Once again, the response is assurances that, were this to happen, it would only be used to target prevention, not removal.

But now there is new reason to question such reassurances, and, indeed, any confidence that Dalton will act with restraint.  While I certainly wouldn’t call her enthusiastic about taking away children, she recently has shown herself to be far too sanguine about the harmful effects of child removal.

That is clear from a commentary she co-authored for the journal Pediatrics. (Other co-authors include Dr. Rachel Berger who runs the "Child Advocacy Center" at the University of Pittsburgh Medical Center.) The commentary puts her firmly in the camp of foster-care apologists, the people who desperately look for scholarly straws to grasp in order to refute the mountain of evidence that foster care often does enormous harm to the children it is meant to help.  I expect this from Naomi Schaefer Riley.  I did not expect it from Erin Dalton. 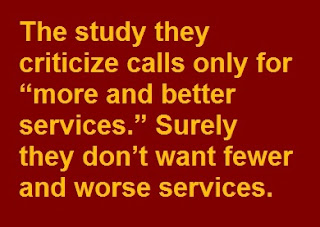 The study’s conclusion is hardly radical: “More and better services are required to support these mothers and to keep mothers and children together wherever possible.”

Dalton & Co. have several complaints about the study.  The study looked at just one jurisdiction and it’s in Canada, no less – the province of Manitoba - so it may not be representative.  Many of the children were taken at birth, they write, so maybe they were placed in the same foster home as their mothers.  But the authors of the study believe this was the case for only “a few” of the children – and the gaps they found in placement rates persist all the way to age 2.

But the most alarming part of the critique from Dalton and her co-authors is this:

The outcome measure selected for this study (placement of the infant into foster care) is not the most important outcome for children and young mothers. Avoiding unnecessary foster care placement is a worthy goal, but placement of an infant, a young child, or an adolescent mother in foster care is not a bad outcome per se.

That is dangerously wrong. Foster care is, in fact, a bad outcome per se, and everyone in child welfare is supposed to know it.

Foster care may, in some limited circumstances, be a less bad outcome than leaving the child in her or his own home. For that very reason, there are a limited number of cases in which foster care placement is essential.

But it is still a bad outcome.  As I discussed in my previous post about foster care apologists, foster care sometimes may be the least detrimental alternative – a concept that should, by now, be Social Work 101.  The fact that a child welfare leader who has child welfare’s equivalent of the nuclear codes doesn’t get this is deeply disturbing.

And it gets worse.  Like Riley, Dalton and her colleagues desperately seek something to refute the massive, comprehensive studies showing that in typical cases, children left in their own homes fare better even than comparably-maltreated children placed in foster care.  The studies, by MIT Professor Joseph Doyle, looked at what actually happened to more than 15,000 children, following them all the way into their late teen years and sometimes into young adulthood.

Dalton & Co. ignore those studies. Instead, they write:

The authors of several longitudinal studies suggest that under certain circumstances, foster care may result in better long-term outcomes than the outcomes of remaining with biological parents.

Leaving aside the use of the demeaning, dehumanizing term “biological parents” – suggesting people who are no more important to a child than a test tube, and leaving aside the fact that three studies barely qualify as “several” – the “longitudinal studies” cited are extremely weak.

As with the studies cited by Riley they depend not on what actually happened to the young people, as the Doyle studies do, but on subjective evaluations of children’s behavior, including evaluations by caretakers – creating significant potential for bias, or simply honest error.

One of the longitudinal studies didn’t have much longitude – it measured changes in three groups of children after only six months – and the three groups had a total of only 92 children.  The study authors themselves call it a “short-term follow-up,” yet Dalton and her co-authors try to use it to justify claims about “long-term outcomes.”

Another study, again using subjective evaluations, involved only 30 children – from Israel. So now a study from Israel is cited by the same people who question the validity of relying on a study from Canada.

The third study also was a subjective assessment. It appears that the assessment took place only once, so it is unclear whether this study was “longitudinal” at all.  This study found that “maltreated children who remain with their birth parents have mental health problems at the same rate as maltreated children who are placed.” [Emphasis added.] Not exactly a ringing endorsement of foster care.

That is the “evidence” Dalton and her co-authors cite to justify this claim:

The assumption that reducing foster care placements always improves outcomes is not necessarily true and may be used to support policies that are not in the best interests of children. 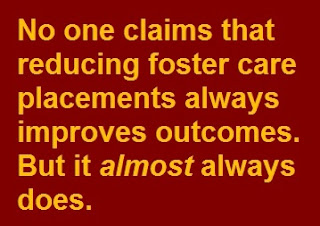 No one claims that reducing foster care placements always improves outcomes. But it almost always   And that makes it entirely reasonable to worry that outcomes are worse for children of teen mothers when those children are placed in foster care.
does.

As for “policies that are not in the best interests of children” what policies exactly do Dalton and her coauthors have in mind?  They never say.  The study they criticize calls only for “more and better services.” Surely they don’t want fewer and worse services.

And the very use of the phrase “best interests of the children” is another indication that child welfare in general and an agency Dalton is likely to run in particular are not ready for something as powerful and easy to misuse as predictive analytics.

I discuss why this seemingly benevolent and inarguable phrase is so harmful in this post, dealing with Maine’s governor, Paul LePage a kind of Donald Trump mini-me. Suffice it to say here that it is a phrase filled with hubris. It gives free reign to the biases of middle-class professionals – and the algorithms they create. The alternative construct, least detrimental alternative, was suggested in part for that very reason.

I expect no better from Paul LePage.  I used to expect far better from the system in Allegheny County, Pa.

The nuclear weapon of predictive analytics is far too dangerous to entrust to the field of child welfare. What we need to demand from child welfare is irreversible, verifiable denuclearization.