Mr. Butts and the foster-care apologists

There is an old Doonesbury cartoon in which Mr. Butts, the anthropomorphic apologist for the tobacco industry is testifying before Congress.

“Good News, Congressfolk!” says Mr. Butts. “The evidence linking smoking with cancer and heart disease is still inconclusive!  That’s right, the jury is still out! Is that great or what?”

I thought of Mr. Butts as I read a column by Naomi Schaefer Riley in which she tries to persuade us that, when it comes to whether it is harmful to tear a child away from everyone he knows and loves and consign him to foster care – well, the jury is still out.

Riley, you may recall, is a now former blogger for the Chronicle of Higher Education. She was kicked off that blog after writing a vile column smearing the entire field of Black Studies – based solely on her disdain for the titles and summaries of three dissertations in the field.  Years later, in a column for Rupert Murdoch’s New York Post, she would go on to explain that racism is so over because

So who could possibly be a better judge of whether children in foster care – children who are overwhelmingly poor and disproportionately nonwhite – are harmed by being there?

Riley is upset by the notion of a “foster care to prison pipeline” – that is, the idea that if a child is placed in foster care the harm of that experience makes it more likely that the child will wind up in jail.  She seems even more upset by the notion that racial bias might contribute to the needless removal of children - after all, racism is over, remember?

Riley doesn’t deny that former foster children are overrepresented in our prisons. She does not deny – but also doesn’t mention – a whole slew of other rotten outcomes for a shocking number of children who endure foster care, such as their high rates of unemployment, food insecurity and homelessness, and their extremely low rate of college graduation.

Rather she falls back on the classic excuse of America’s foster care-industrial complex: Hey, it’s not our fault; those kids were all messed up by their no-good parents before we ever got 'em. What do you expect us to do, actually make things better?

So Riley claims that “We can’t separate the effect of kids being in abusive and/or neglectful homes and the effect of the foster care system.”

There are two problems with this claim. First, not all children placed in foster care came from “abusive and/or neglectful homes.” Many came from homes that were simply poor.

We can. And we have.

Findings from the definitive studies

MIT Prof. Joseph Doyle did a direct head-to-head comparison of outcomes in typical child welfare cases. He looked at records of more than 15,000 children, followed them all the way into their late teen years and, in some cases, young adulthood.  He compared children placed in foster care to comparably-maltreated children left in their own homes. He focused on the typical cases, not the extremes. Most important, he didn’t simply make a subjective assessment of the youths, or rely on the subjective assessments of others.  Rather, he looked at what actually happened to them.

Compared to the comparably maltreated children left in their own homes, the foster children were:

And, by the way, these studies are not alone. A third study, from researchers at the University of Minnesota, using different methodology and outcome measures also found that children placed in foster care fared worse than comparably-maltreated children left in their own homes.

So yes, Naomi, there is a foster care to prison pipeline – and a whole lot of other harm, too.

To make her Mr. Butts-style the-jury-is-still-out case, Riley cites one article, by Youngmin Yi and Christopher Wildeman of Cornell University in which the authors claim that

A foundation of sand

The MIT studies followed children well into adolescence and beyond, and looked at what actually happened to the children. The University of Wisconsin study followed children for an average of only two-and-a-half years, measured only two outcomes and, for one of those outcomes – the extent of the children’s behavioral problems - relied on questionnaires filled out by the children’s current caretakers. Obviously that’s a far more subjective method than the method used for the MIT studies – seeing what actually happened to the youth.

Compounding the problem: Berger and his co-authors admit that when these sorts of questionnaires are filled out by different people at different times, it “may be problematic.”  No kidding.  In fact, alleged “differences” in behavior may simply mean differing perceptions by the people filling out the questionnaires.

They fail to acknowledge still another problem: Foster parents were asked to fill out a questionnaire assessing the children’s behavior while in their foster homes.  In effect, they’re being asked how well they are doing as foster parents. No chance of bias there!

After all that: no improvement 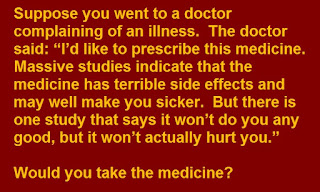 But even this method for calculating results from this one study did not find that foster care made things any better for the children.  The best Berger and Co. could say is that, using some of the models they applied to a partially subjective evaluation of only two outcomes, the foster children didn’t do any worse than the children left in their own homes.

Consider the implications:  Suppose you went to a doctor complaining of an illness.  The doctor said: “I’d like to prescribe this medicine. Massive studies indicate that the medicine has terrible side effects and may well make you sicker.  But there is one study that says it won’t do you any good, but it won’t actually hurt you.”

Would you take the medicine? 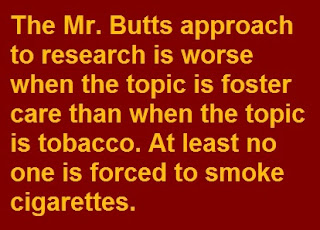 Of course, it’s worse for foster children. They have no choice. Similarly, the Mr. Butts approach to research is worse when the topic is foster care than when the topic is tobacco. At least no one is forced to smoke cigarettes.

But Riley doesn’t stop with sliming birth parents. She also slimes the least harmful form of foster care, kinship care - placing children with relatives instead of total strangers.  She quotes a conference speaker from Harvard who claimed that “If you have a parent who has been arrested, you are twice as likely to have an aunt or an uncle who has been arrested.”

To which the proper scientific response is: So what?

For starters, many parents who lose children to foster care have not been arrested. Others have been arrested for the same basic reason their kids were taken: they are poor and nonwhite. And being arrested does not preclude being a good parent – something that is apparently beyond the ability of some academicians to understand.

And here, again, the evidence is in. Multiple studies have found that kinship care typically is better for children’s well-being, more stable, and, most important, safer than what should properly be called stranger care.

In fact, even Youngman Yi and Christopher Wildeman admit this.  In the same article Riley cites when it supports her point of view, Yi and Wildeman also write that:

A wealth of evidence illustrates the benefits of kin-based care relative to other placement types and shows that existing social networks play a critical role in supporting children’s wellbeing.

For some reason, Riley doesn’t mention that part of the article.

And what does Riley propose as an alternative to curbing the needless removal of children? The usual foster care-industrial complex bromide: Make foster care “better.”

Well yes, we could make foster care better.  But not by much.  Here again that pesky research gets in the way.

One of the many, many studies documenting the horrible outcomes for foster children found that only 20 percent of the children studied were doing well as young adults.  But this same study also attempted something else: It came up with a formula to estimate how much better the outcomes would be if somehow everything wrong with foster care were fixed and the system were perfect. The answer: The outcomes would improve by 22.2 percent.

So if foster care were made perfect, it would churn out walking wounded only three times out of five instead of four.

That’s well worth trying. But the real lesson from that study, and all the others, is that foster care is fundamentally unfixable. 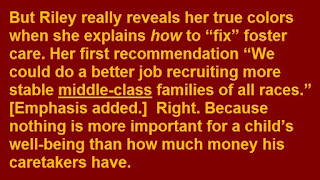 But Riley really reveals her true colors when she explains how to “fix” foster care. Her first recommendation “We could do a better job recruiting more stable middle-class families of all races.” [Emphasis added.]

Right. Because nothing is more important for a child’s well-being than how much money his caretakers have.

None of this means that no child ever should be placed in foster care.

As so often happens when foster-care apologists try to defend the system, they put the burden of proof in the wrong place.   Long ago, when I was just starting out as a reporter, it was actually the head of an adoption agency who said something I've never forgotten: "The burden of proof should always rest with those who believe children don't belong in their families."

Yet Riley suggests the fact that there exists a study showing that foster care does not make things worse is reason enough to keep right on throwing children into the system – and failing to hold the system accountable for what happens to those children.  When will we finally demand that the foster-care apologists prove that their intervention is actually better for children in typical child welfare cases?

Of course they can’t do that.  Because, contrary to Riley’s claim, when it comes to the way the foster care system harms children in typical cases, the jury is in.  And the verdict is best summed up by another famous line from Doonesbury: