I struggled for a long time with how to write this earlier post to this blog, about the big differences – but also the big similarities – between what Trump is doing to children at the U.S. -Mexico border and what the American child welfare system does every day.

The differences: Almost everyone in U.S. child protective services means well and some of the children they take really need to be taken. 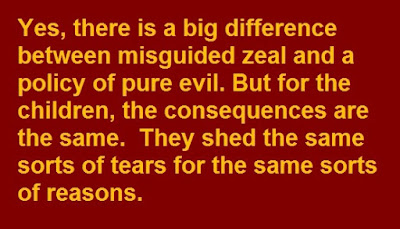 And, most important, the simple fact that, for a young child, what one professor of pediatrics called the “catastrophic” impact of separation is just as great no matter why the child was taken away. Yes, there is a big difference between misguided zeal and a policy of pure evil.  But for the children, the consequences are the same.  They shed the same sorts of tears for the same sorts of reasons.

Perhaps I still wouldn’t have published the post had I not seen people trying to draw sharp, and false, distinctions – as in this op-ed for The New York Times written by Jeanine Cummins, a former foster parent.

There is much that is good in her commentary. She writes with great empathy about the enormous trauma experienced by foster children placed in her care.  Her description of that anguish is remarkably similar to what a foster parent for children taken at the border said happened to the children in her care.

But then comes the part where Cummins writes about how upset her own 7-year-old daughter became when she saw how much the foster children in her home were traumatized. She writes:

My older daughter began having nightmares that “the people” would take her away from us and give her to another family. She was inconsolable. “If it could happen to them,” she asked with the cleareyed logic of a 7-year-old, “why can’t it happen to us?”

I tried telling her that it happens only to parents who don’t, or can’t, take care of their children. It happens only when parents aren’t doing what they’re supposed to do.

I told my kids this kind of separation happens only to children whose parents don’t do the right thing. But now it’s happening to people who are behaving exactly as good parents should. … Now I understand that it’s not always merit-based, who gets to keep their kids and who doesn’t. It can be arbitrary — a matter of unlucky geography — even in 2018, even in the United States of America.

My daughter was right to be afraid.

The problem with that, Ms. Cummins, is that “this kind of separation” has always happened to “people who are behaving exactly as good parents should…”  And it’s not just a matter of geography. It’s much more a matter of race and class.

Cummins’ daughter was too young for the honest answer to her concern.  But were Ms. Cummins to answer honestly, she’d have to say something like this: