“Child welfare” in Washington State: No AMBER Alert, no release of alleged kidnapper’s photo for days after a foster mother allegedly kidnaps a child in her care. And almost no media coverage, either.

UPDATE: An arrest warrant now has been issued for Amanda Dinges' mother as well.
Thanks to KING-TV Seattle – and no other Washington State media – here’s what we know about a case in which a foster mother allegedly kidnapped a five-year-old foster child in her care:

● In July, the lawyer for the birth mother raised concerns about the placement because, KING reports, “[the foster family] made some comments insinuating that the child was already a member of their family and that seeing his mother was too inconvenient and a nuisance to them."

● On Nov. 15, the foster mother, Amanda Dinges, was told that the birth mother would start getting overnight visits with her son, a key step toward reunification. 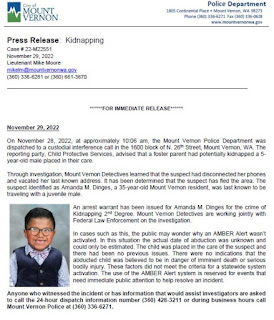 ● On Nov. 18, apparently still under the impression that the five-year-old had been returned, CPS
removed the older child.

● Sometime between then and Nov. 21, Dinges – and the five-year-old child – disappeared.

● Nobody noticed until Nov. 25, when the child didn’t show up for a scheduled visit. The birth mother notified CPS, which didn’t get the message until Nov. 28, due to the holiday weekend.

● On Nov. 29, local police issued a warrant for Dinges’ arrest on charges of Second Degree Kidnapping. They put out a press release, but not an AMBER Alert.  Why not?  Because, according to the release:

--“The date of the abduction was unknown…” (yeah, I don’t know why that’s relevant either).

--“The child was placed in the care of the suspect and there had been no previous issues.” (You mean until the alleged kidnapping, right?)

--"There were no indications that the abducted child was believed to be in danger of imminent death or serious bodily injury.” (Aside from being an “abducted child.”)

Not only was there no AMBER Alert, there was no picture of Amanda Dinges. The picture of Dinges at the top of this post came only days later.  (And by the way, now that the pictures are out we know that Dinges is white and the child she allegedly kidnapped is not.)

All of this is from KING-TV.  There’ve been a couple of tiny stories on other broadcast sites.  And here’s what the Seattle Times has published so far: 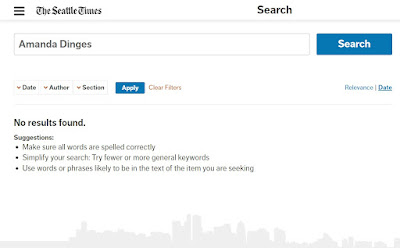 So ask yourself two questions: Suppose a birth mother was accused of kidnapping her child from a foster home.  Would it have taken a week before anyone noticed?  Would there be no AMBER Alert?  And would the mighty Seattle Times have roused itself to write anything about it?  Would it, in fact, have dominated news coverage across Seattle media, and possibly beyond?

Of course, that might change.  If the child is found safe and the foster mother is arrested, and if she then tries to smear the birth mother and play the “bonding card” I’ll bet the Seattle Times will be all over it.  And Investigate West, whose stories about foster care often sound like they were written by the state foster parent association, might even weigh in – with a sympathetic profile of the alleged kidnapper.

Meanwhile, I'll do what the Seattle Times hasn't bothered to do: If you've seen the foster child and/or Amanda Dinges and/or Dinges' mother, please call the Mount Vernon, Washington State, Police at (360) 428-3211

Posted by National Coalition for Child Protection Reform at 11:43 PM