Can we help a leader of the “child welfare” establishment master one of the grand challenges for social work?

Yesterday, in a post about “child welfare” and the moral bankruptcy of social work, I noted that Alan Detlaff of the University of Houston, who has dedicated his career to fighting racism in family policing (a more accurate term than “child welfare”) had been ousted as the Dean of the university’s Graduate College of Social Work.

I have no doubt he could have kept that deanship if he’d simply used the playbook perfected by another social work dean, Richard Barth at the University of Maryland: proclaim social work so inherently superior to every other profession that it has eradicated all racism from decision making in child welfare.  Think I’m kidding?  Take a look.

I didn’t quite get that right.  Barth also is no longer a dean.  But he wasn’t ousted – he went on to another exalted position: Chair of the Executive Committee of something called “Grand Challenges for Social Work.”

But it hasn’t all been rosy for Barth.  The life’s work of Barth and other well-meaning social workers who have done so much to build, maintain and expand the child welfare surveillance state has come under increasing scrutiny for the enormous harm it’s done to children.  As that has happened, Barth has become increasingly frantic on Twitter, most recently resorting to fearmongering and taking study findings out of context.  Here’s something he tweeted on Dec. 17:

As you read on, note that this is a study not of child abuse deaths, but of deaths due to diseases. 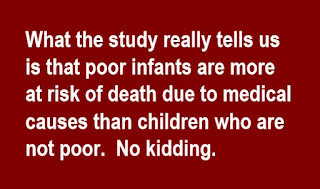 Barth does not link to the study, (which is available in full here) so it would be understandable if people thought “Oh my God!  We have to rush more infants into foster care – it’s the only way to save them from getting fatal diseases!”  But even the authors of the study itself don’t say anything like that.  And the real lessons from the study are very different.

So let’s look at the things about this study that Barth doesn’t mention:

● The study compares death rates due to disease in an overwhelmingly poor population – children reported to family police agencies -- to the general population.  So what the study really tells us is that poor infants are more at risk of death due to medical causes than children who are not poor.  No kidding.

● As for the improvement among children in foster care – they are now in homes with wealthier parents and better access to medical care.  You don’t suppose … ? 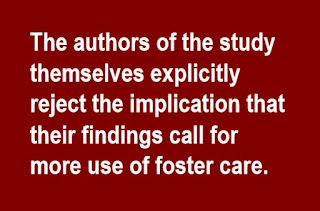 That makes such deaths no less tragic, but it does change how we should go about trying to stop them.  If anything, the study finding is one more indication that there’s a whole lot of false reporting and needless investigating going on, traumatizing families and overwhelming workers.  If you didn’t do that, workers might actually have a better chance of finding the 0.13% of children at greatest risk in time.

● Implying that it’s a good idea to throw even more children into foster care puts them at high risk of another harm: abuse in foster care.

● The authors of the study themselves explicitly reject the implication that their findings call for more use of foster care. (If you missed that, Prof. Barth, it’s on page 6, column 3 of the .pdf version.)

So I would like to thank the study authors for bolstering the case against mandatory reporting, needless foster care and confusing poverty with neglect, and bolstering the case for making sure poor families can get the same high-quality health care as middle-class and wealthy families.

Posted by National Coalition for Child Protection Reform at 11:48 PM