UPDATED: Yes, Ma’Khia Bryant’s family poverty was confused with neglect – and yes, that contributed to her death while in foster care

UPDATE, MAY 8, 2021: A team of New York Times reporters did indeed look wider and deeper. They have a comprehensive account of the crucial role played in this tragedy by the failure of the "child welfare" system.

At first, most news accounts about the death of 16-year-old Ma’Khia Bryant focused on the immediate cause of death: She was shot by a Columbus, Ohio police officer outside the foster home where she was forced to live, a home to which police often had been called before.

Look wider and look deeper, and we can see the real lessons from this tragedy:

And it’s clear that the reasons she was taken from her grandmother were rooted in poverty – including lack of housing.  There’s a detailed discussion of this in a Columbus Dispatch story, and even though it’s the agency’s side of the story (from the court file, which is the child welfare equivalent of “police say…”) it still is clear that if the grandmother had gotten anywhere near the financial assistance and other support that stranger-care parents get to take in foster children, Ma’Khia could have remained with her grandmother.  UPDATE, MAY 8, 2021: The New York Times account confirms that the crucial turning point in this case was the needless separation of the children from their grandmother.

There is a pointless debate in some child welfare circles over whether children are taken away because of poverty alone.  It’s pointless because, as this tragedy illustrates, if the solution is just a little bit of money (and there is plenty of evidence for that) it doesn’t matter if the poverty is “alone.”

The “shortage” of foster parents is artificial.  The confusion of poverty with neglect, and racial bias, are key reasons why so many children are taken needlessly from their homes. In addition to the enormous emotional harm done to children (the same sort of harm we saw at the Mexican border), this overloads the system, making it harder for workers to find the relatively few children in real danger.

Multiple independent studies show that the rate of abuse in foster care is far higher than in the general population – and far higher than agencies admit to in official statistics. 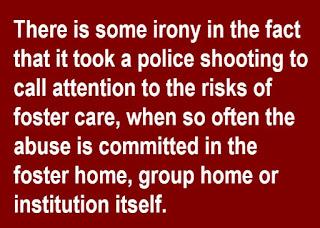 Indeed there is some irony in the fact that it took a police shooting to call attention to the
risks of foster care, when so often the abuse is committed in the foster home, group home or institution itself.

You can’t fix this with more licensing rules and inspections.  As long as there is an artificial shortage of foster homes there will be enormous pressure to see no evil, hear no evil, speak no evil, and write no evil in the casefile.

But if you get the children who don’t need to be in foster care back home, you’ll have plenty of room in good, safe foster homes for the relatively few children who need them.  The only way to fix foster care is to have less of it.

Ohio is an outlier – and it’s NOT because of opioids.  Ohio takes away children at a rate 25% above the national average even when rates of child poverty are factored in. (And, the national average itself is way too high.) Ohio’s rate of removal is 50% percent higher than Connecticut – another state with a serious opioid abuse problem.  But Connecticut has invested heavily in home-based drug treatment.

In fact, within Ohio, where child welfare is county-run, there are significant differences in approach, with some counties successfully reducing the misuse and overuse of foster care. In contrast, while data on entries into care in Franklin County (metropolitan Columbus) are not readily available online, the number of children trapped in foster care on any given day in that county is sky high, vastly above the state and national averages.

It’s not a matter of money, either.  I’m a tax-and-spend liberal and proud of it; there’s nothing at which I’d rather throw money than child welfare – which is not the same as the child welfare system.  But as of 2016 which, unfortunately, is the most recent year for which data are available, Ohio spent at a rate above the national average.  But the great paradox of child welfare is that the worse the option the more it costs.  Safe, proven alternatives to foster homes cost less than foster homes, which cost less than group homes, which cost less than institutions.  Yes, we should spend more – but only if we also spend smarter. 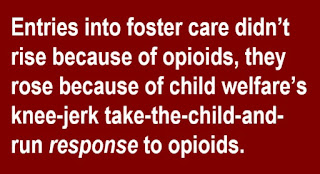 Ohio Governor Mike DeWine is part of the problem.  Back in 1995, I testified before a U.S. Senate subcommittee on child welfare issues.  It was a great lesson for me in how this issue crosses partisan lines.  The two Senators who most understood that protecting children demanded more, not less, effort to preserve families were Democrat Paul Wellstone and Republican Dan Coats.  Those most prone to ignore what really works and push for increasing surveillance and child removal were Democrat Chris Dodd – and Republican Mike DeWine.

DeWine would go on to be a prime sponsor of a law now targeted for repeal by many racial justice activists, the so-called Adoption and Safe Families Act.  ASFA embedded racial and class bias in every part of the system, it encouraged the needless removal of children and a mad rush to terminate parental rights.  And no, it is not necessary to reduce the time children spend in foster care.

He’s brought that same hostility to poor families of color to his work as governor. Of course, if you ask him, the governor will tell you he really, truly believes in “prevention” and wants to use foster care only as a last resort.  But part of the problem with the child welfare debate is that we all say that.  In fact, we all say most of the same things.  (Have you ever heard anyone say:  “Boy do I hate prevention, if there’s one thing I can’t stand it’s prevention!”?)  And, by and large, when people say this, they are sincere.  But we have vastly different definitions of what constitutes prevention – and what constitutes “last resort.”

If Ohio really believed in prevention and really took children only as a last resort, odds are Ma’Khia Bryant would be alive today.

Posted by National Coalition for Child Protection Reform at 8:09 AM