Remember when the D.C. family police denied they take children if their parents are late to pick them up after school?  A policy manual from the D.C. schools reveals that it’s more complicated. 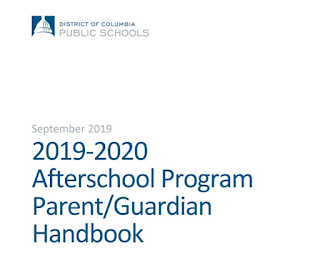 If you’re a parent living in poverty, you may need a lot of help.  But no matter where you turn for help you risk being turned in to the family police (a more accurate term than child protective services).  In Washington, D.C. that even applies if you’re late picking up your child from an afterschool program.  Turns out, it’s right in the D.C. Public Schools’ handbook for such programs.

But that’s not the way the D.C. family police agency has been spinning the story.

Back in late August 2019, a Washington, D.C. television station revealed that a local public elementary school was threatening to call the family police, known in D.C. as the Child and Family Services Agency, if parents were late picking up their kids from school. CFSA then would take the children to their central office.

About eight months later, the head of the agency flatly denied this in a way that made it easy for listeners to infer the story was wrong.

But the story was right. Only after the policy was exposed was it changed.

And it gets worse.  No one at CFSA bothered to mention that handbook, the one that includes  a very similar policy – citywide – for some of the children in afterschool programs.

To understand the context, we need to go back to August 2019, when WUSA-TV, Channel 9 broke the story.  They reported on a memo sent to parents at one school at the start of the school year – and lest there be any doubt – displayed the memo, which said:

If you choose not to have your child remain in the Afterschool Program, then he/she MUST be picked up promptly at 3:15 p.m. For those students that are not picked up on time (3:15pm) the Child and Family Services Agency (CFSA) will be contacted, and parents will be required to pick their child up from their office." [Emphasis most definitely in the original]

Channel 9 got comment from a CFSA deputy director, Robert Matthews, and D.C. Schools Chancellor Lewis Ferebee. At no point did either of them deny that the memo was real. At no point did they say the school was wrong to have issued it. At no point does Matthews say CFSA would not cooperate with demands to come and get children under these circumstances.  That’s worth keeping in mind in light of how the agency is spinning the whole thing now.

I discussed the harm of this policy in a follow-up story on Channel 9.  At that time CFSA still did not make the claims it would make now, a year-and-a-half-later, as we’ll see below.

Fast forward to May 2020. By then we were well into the pandemic.  CFSA Director Brenda Donald appeared on a prestigious local radio program, The Kojo Nnamdi Show, on public radio station WAMU. She touted the false master narrative that, in the absence of “mandated reporters” constantly keeping their eyes on children, they were at grave risk of child abuse.  Donald even urged the very people to whom families were most likely to turn to for help to become spies – though, of course, she didn’t use that word. Here’s what she said:

So our big concern now is really not so much our children, who are in foster care because they are well cared for. They're in foster homes. … But it's the children we don't see who may be suffering that we are concerned about. …

But now what we've asked our community partners to do who are out about in the community. They're providing meals to families. They're connecting with families in other ways to really step up and be more vigilant. If they see that, you know, perhaps they haven't seen a child when they've delivered meals to the family or they may observe some other signs where they note that something is not quite right.

So now every D.C. parent with a hungry child has to worry about whether to accept a meal just when they may need it most.

I called in to the program to raise that concern.  To which Donald replied:

We’re not as – certainly when someone calls our hotline we have experts, who are trained to ask certain questions to really understand if someone is making a report that really doesn’t go to true abuse or neglect. We’re not going to respond to a frivolous call.

Since Donald said they don’t respond to frivolous calls, that seemed like a good time to bring up the WUSA-TV story. This exchange followed:

RICHARD: Last year Channel 9 reported that if you're simply a few minutes late to pick up your child from a D.C. public school those school teachers who are ever on the alert will call CFSA. CFSA caseworkers would be there and haul them off to Brenda Donald's office, a terribly traumatic experience for a child.

DONALD: Clearly bad information that was false that was corrected. Someone -- we don't know where that came from, but that absolutely does not happen and is not encouraged.

All of which brings us to last week, when a similar situation arose in Chicago.  Lenore Skenazy wrote about that case for Reason.  And she discovered that the D.C. approach went way beyond one school.  She links to an old edition of something called the “District of Columbia Public Schools Afterschool Program Parent/Guardian Handbook.”  That prompted me to look further.  I found the handbook for the 2019-2020 school year – the school year in progress at the same time Brenda Donald was on The Kojo Nnamdi Show.

Of course, the original WUSA9 story dealt with what a school did with children who were not in an afterschool program.  The passages below deal with what happens to students who are somehow involved with such a program – and sure enough, as you’ll see below, CFSA ultimately would split this very hair.  But either way, it doesn’t exactly sound like this “absolutely does not happen…”  Let’s take a look at Page 7:

1. If a student is not picked up by the end of the program day (6:00 p.m.), afterschool staff will call the phone numbers listed in the child(ren)’s enrollment application to locate an adult who can pick up the student.

2. If, after multiple attempts, the student(s)’ parent, guardian, or emergency contact(s) cannot be reached, the school will call the DC Child and Family Services Agency (CFSA) at 202-671-7233. [Emphasis added.]

3. If the parent, guardian, or another approved adult arrives prior to the CFSA representative, CFSA receives another call and a reported update.

4. The student may not return to the afterschool program until the AA/full-time coordinator and/or the principal has spoken with the parent, guardian, or caseworker and has agreed to a plan by which the student will be picked up on time. [Emphasis added].

Now let’s turn to page 8, regarding students who are kicked out of an after-school program:

DCPS implements the following steps in the event that the student (who has been previously removed from the afterschool program) is left after school dismissal:

--The student will be held in the main office once school is dismissed (beginning at 3:15 p.m.).

-- School staff will call the parent/guardian after dismissal to request immediate pick-up from school (at 3:30 p.m.).

-- If the parent/guardian does not pick up a student within an hour of the first call, CFSA will be contacted and asked to take custody of the student (at 4:30 p.m.). [Emphasis added].

Yes, there is a slight difference between this district-wide policy involving certain students involved with afterschool programs and what happened at that one school that was the subject of the Channel 9 story:  The district-wide policy sometimes allows an hour’s grace period before turning over the situation to the family police.

On Friday I reached out to CFSA Communications Director Kera Tyler for the agency’s response.  I asked her why Donald referred to what WUSA9 reported as “Clearly bad information that was false that was corrected. Someone -- we don't know where that came from, but that absolutely does not happen and is not encouraged.”  In an email, Tyler acknowledged the memo from the school was real but claimed the school was the one that got it wrong. Says Tyler:

In addition to responding to your hyperbolic language re: caseworkers hauling children to her office, Director Donald was referring to the misinformation in the principal’s communication to parents. Teachers are not directed to contact the DC Child and Family Services Agency when families are “simply a few minutes” late picking up their children by the 3:15 p.m. elementary school dismissal. Shortly after this news story ran, Principal Thomas and DC Public Schools (DCPS) corrected the misinformation, children who are not picked up on time at the end of the regular school day are enveloped into available afterschool programming while staff members work to contact family members and emergency contacts. The DCPS Parent Handbook you’ve linked and referenced is regarding afterschool programming.

So WUSA9 got it right – that was the school’s policy and only after Channel 9 broke the story, were things “corrected.”

But notice that the response says nothing about why a very similar policy exists, districtwide, for afterschool programming.  (I’ll get to how CFSA spins that, below.)

Tyler went on to deny that Donald was misleading listeners on the radio program.  There just wasn’t time to go into detail about it, Tyler said, because “The purpose of her appearance on The Kojo Nnamdi Show last spring was to address concerns regarding child welfare during the public health emergency.”  Translation: Donald was too busy scaring people into rushing to report any vague suspicion of child abuse and urging them to usie meal drop-offs for spying.

But even if we accept this at face value, it doesn’t explain why CFSA didn’t say anything like this when the agency’s deputy director commented in the original WUSA9 story.  (Neither did the D.C. Schools Chancellor.)

As for the policy that CFSA at no point denies, the one about afterschool cases, Tyler explains that’s just CFSA being kindly, benevolent helpers!  Writes Tyler:

Let’s stop right there.  “Offer” implies the families can say no. But this is an “offer” they can’t refuse.

By and large, these incidents are not abuse or neglect, and a child requiring temporary safe supervision until their family can be reached is not a removal.

But does it feel like it’s not removal to the child?

CFSA social workers are trained professionals who team with educators to support families during these incidents by helping to identify additional familial contacts and providing that safe supervision if necessary.

But recall that the actual policy manual puts it differently:

If the parent/guardian does not pick up a student within an hour of the first call, CFSA will be contacted and asked to take custody of the student (at 4:30 p.m.).

In 2019, CFSA told Channel 9 they didn’t track how often this happens.  They still don’t. But Tyler says there have been only a handful of cases in the past two years during which CFSA had to take custody – oh, sorry, I mean provide safe supervision -- under these circumstances.

Tyler did offer schools help with p.r. -- declaring that “we’re happy to work with them to help soften the tone of any language that comes across punitively.”

Because how could children possibly feel punished by having strangers come to the school and, yes, haul them off to the downtown office of the family police?