Child welfare in New York: Why you should ALWAYS fact check the commissioner of New York City’s family policing agency

Over the past four years, I’ve had many opportunities to observe the m.o. of David Hansell, commissioner of the New York City Administration for Children’s Services.  What we have seen far less often – o.k., up to now, never – is a reporter call him out in real-time when he fudges the figures.

And that’s one of the things that sets apart a child welfare webinar organized this week by the Center for New York City Affairs at The New School.

The main highlight for me was the comments of Halimah Washington, Community Coordinator for Rise, the magazine written by parents caught in the net of ACS and other family policing agencies. She speaks not only of what ACS did to her but about how it fails so many other families and why so-called “preventive services” can be just another form of surveillance and harassment when they are run by or overseen by an agency that can take away your children.

So you may want to stop right here and just listen to Ms. Washington:

Another highlight came when Jess Dannhauser, now director of a private foster care agency but formerly an official of ACS, apologized for a policy he pushed when he was at the agency, a policy that expanded the harassment of families due to “educational neglect” reports.  That is a problem that probably has worsened due to COVID-19.

But one more high point for me was watching a journalist call out Hansell when he tried to make selective use of statistics.

There are three key elements to any David Hansell public appearance.

1.         1. Everything good that has ever happened in New York City child welfare is thanks to David Hansell!  Thus, he manages to take credit for a decline in the city’s foster care population that dates back to the 1990s.

2.         2. Everything bad that still happens is someone else’s fault.  It’s because of another city agency or a state agency or the state legislature. You can watch him do lots of this during the webinar.

3.         3. Data are taken out of context to cast ACS in an undeservedly favorable light.  (I went into detail on that one in this column for the online news site City Limits.)

If anyone hoped things would change after the debacle of his agency getting caught trying to get one of its biggest critics fired, such hopes were dashed during the webinar.

Hansell started bragging about the decrease in the number of children in foster care on any given day – again, the decrease that began all the way back in the 1990s.  (The record on entries into foster care is more mixed.  It got worse at the start of his tenure, now it’s improving, but until COVID it remained worse than before Hansell became commissioner.)

But as the Movement for Family Power pointed out in a comprehensive report released last June, even as the number of children in foster care on any given day has declined, there has been a vast increase – almost child-for-child -- in the number of children whose families are forced to undergo onerous, court-ordered supervision and surveillance.  Here’s that graphic from their report again: 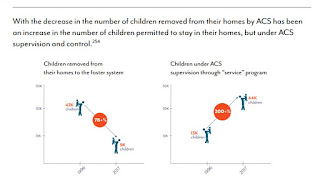 No that’s not as bad as losing a child to foster care, but it can still undermine a family (If you listened to Ms. Washington you already know that. Here’s another case in point). It’s a level of needless intrusion that white, middle class families would never tolerate.

And that brings me to this exchange between Hansell and the moderator Abigail Kramer, senior editor at the Center for New York City Affairs.  It starts at 1:08:07.

KRAMER: It’s also clear that under your administration, both the number and percentage of families who have cases filed against them in family court has increased significantly as has the number of families who end up with court-ordered supervision. … [They have to] accept continued investigation and monitoring … often for very long periods of time, and typically long before there’s a fact-finding or the equivalent of a hearing where the judge actually decides on the facts of the case. So under the umbrella of this conversation about support vs. surveillance, I’m wondering if you can speak to the increase in that?

HANSELL: Actually, I don’t want to get into a data discussion here, but actually I think those numbers are wrong, Abigail. I think there were fewer requests for supervision last year than the year before, fewer families under supervision and I think the same was true 2018 to 2019, so I actually think that number has been decreasing …

But Hansell picked the wrong reporter from whom to omit crucial context.  Kramer probably has tracked New York City child welfare data more closely than any other reporter.  She also knows that Hansell became ACS commissioner in February, 2017. So, after a prolonged digression by Hansell, Kramer returned to the data at 1:12:55:

KRAMER: According to my analysis of ACS numbers, the number and percentage of families brought into court who end up under court supervision has indeed gone down from the high that it hit in FY 2018 but still remains significantly higher than in the years prior to your administration. … [Emphasis added.]

The irony is, Hansell could have finessed this and come out looking good. When the numbers first were pointed out to him he could have said: “Yes, court supervision cases went way up at first. There had been a high-profile death of a child known-to-the-system and we overreacted. But we were wrong to do that, and we’re beginning to correct it.”

But that would have required Hansell actually to acknowledge having been wrong.

Given how averse he seems to be to doing that, we need many more journalists willing to check, double-check and triple-check anything that comes from the New York City Administration for Children’s Services.

And if you’re not reading this in New York City, you should do even more checking when your own family policing agency puts out a statement.  Because New York City really is one of the least bad child welfare systems in the country (mostly not thanks to David Hansell). Wherever you are, it’s probably worse.

Posted by National Coalition for Child Protection Reform at 9:47 AM