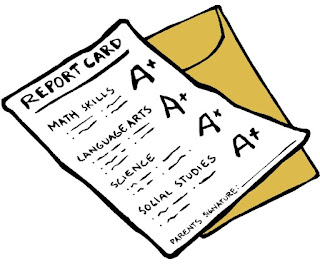 John Tomasi, a 14-year-old from Brooklyn, New York, got a pretty good report card from Cobble Hill High School in Brooklyn last fall.  According to the New York Post:

His physical-education teacher twice gave John the highest grade: “ME” for “exceeds standards.”  His algebra teacher cited “progress toward … understanding the connection between proportional relationships, lines, and linear equations,” among other skills.

It’s a remarkable achievement – considering that John was never enrolled in the public school.  He was on the honor roll at a parochial school, where he had a perfect attendance record for both online and in-person classes.  A mix-up at John’s middle school led Cobble Hill to believe John was enrolled there.  (That doesn’t explain the report cards, however.)

It would be funny, if not for the fact that even as they churned out report cards about his progress, Cobble Hill did notice his absence.   You know where this is going, right? Instead of calling the family to find out what was going on, they rushed to call in a report of “educational neglect.”  And New York City’s Administration for Children’s Services rushed to investigate “suspected child abuse or maltreatment.”  According to the story:

“On Nov. 5, I got a knock on my door at 5 p.m. from an ACS worker stating that my son has not been attending Cobble Hill High School,” John’s mom, Margaret Tomasi, told The Post. “It was very traumatizing and shocking.” …

The ACS investigator asked John’s parents if they used drugs, were ever arrested, been on welfare, or had a history of domestic violence. The worker asked many personal questions, including what religion they practiced, and looked inside their kitchen cabinets, refrigerator and freezer to check for sufficient food.

The investigator asked John to lift his shirt, pull up his pant legs, and remove his socks to look for bruises or other injuries.

Now let us consider all the screw-ups, by the school, but especially by ACS.

● As we have noted before, “educational neglect” is a category that is routinely abused by school systems, usually when parents are fighting to get their children a better education. Most recently, it’s been used in New York City and elsewhere to harass poor families who can’t get their kids online for class.  (Rich parents get a free pass.)

More than a decade ago, the highly-respected Vera Institute of Justice issued a report arguing that educational neglect either shouldn’t be a child protective services issue at all, or, if it must exist, it should be handled through an approach known as “differential response.”

● Since educational neglect is in state law, ACS might argue that it had no choice but to send out a caseworker to traumatize the family.  This is not clear.  The story says the school “alerted” ACS.  If, in fact, they contacted ACS directly then the agency had discretion.

More likely, however, the school called the state child abuse hotline which “screened in” the report and sent it on to ACS.  At that point, ACS had to do something – though it could have done what the Vera Institute report suggested all those years ago and used “differential response,” which does not involve a traumatic investigation or any threat that a child might be taken away.

● Once the worker was at the door and was told that John was, in fact, enrolled in another school, that should have put everything on hold until the next day, when the school could (and did) confirm it.  Instead, the worker marched full speed ahead, poking and prying into the most intimate aspects of the family’s life – none of which had anything to do with the actual complaint – and partially stripsearching the teenage boy. (And, by the way, ACS: Why is a family’s religion ever any of your business?)

In the process, of course, the worker wasted time that could have been spent finding a child in real danger.  The worker also put everyone at greater risk of contracting COVID-19, especially given that this happened in New York City in November.

● The city Department of Education acknowledged that before calling a child abuse hotline school staff “should first make multiple attempts to contact a family.”  But we’ve also seen story after story about schools failing to do that, while ACS does nothing about it.

Why aren’t ACS and the state Office of Children and Family Services (OCFS) demanding that schools stop harassing families, and wasting caseworkers’ time this way?  Why isn’t OCFS, which runs the state hotline, insisting that schools document their attempts to contact families before “screening-in” such calls, and otherwise raising the standard for accepting them – as the Vera Institute report recommended in 2009?  Why isn’t ACS investigating school employees who make such calls to see if they constitute malicious false reports?

We know why.  It’s because the current system allows ACS to do the one thing it does as well – or better – than any other child welfare agency in America: Blame someone else whenever something goes wrong.