Child abuse and COVID-19 in Alaska: The message and the messenger

It should be a basic rule of journalism – if someone points with alarm to a huge change in the percentage of something – but you don’t have the actual numbers – ask more questions.  That is just one reason to be concerned about Alaska’s version of that big local journalism trend story of the past year: The story warning, despite a mass of evidence to the contrary, that COVID-19 supposedly is leading to a hidden pandemic of child abuse.

The other reason to ask more questions involves who it is that’s pushing this kind of narrative in Alaska.

It began with a story from Alaska Public Media claiming that severe cases of child abuse seen by the state’s largest “child advocacy center” had “skyrocketed by 220% in the last year.”  According to the story: 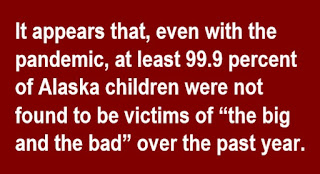 A later Associated Press story reports that Knox’s center, Alaska Child Abuse Response and Evaluation Services, corrected the estimate to 173% after noting that the 2019 figure was missing four cases.  That makes it possible to at least guess the raw numbers underlying those huge percentage changes.  And Knox’s center appears to handle about 44 percent of all cases seen by child advocacy centers across the state.*

Put all that together and it appears that, even with the pandemic, at least 99.9 percent of Alaska children were not found to be victims of “the big and the bad” over the past year.

Once again: Yes, we DO need to “quibble about numbers”

This is where some defenders of an approach some of them have themselves labeled “health terrorism” will say: “How dare you quibble about numbers! Children are being horribly hurt, sometimes dying!  Even one case is too many!”

The second two sentences are, of course, correct.  But that is precisely why we do need to quibble about numbers.

COVID has put more stress on everyone, and that stress can cause a small number of people to lash out horribly (though, paradoxically, in some communities, the lack of omnipresent surveillance by what should properly be called the family police may be easing stress).  So it is reasonable to suspect that the number of such cases may have risen from infinitesimal to slightly less infinitesimal.  But if we don’t quibble about numbers, we wind up reducing the chances of reducing the number from infinitesimal to zero.

We need to quibble about numbers for all of the reasons discussed in our report, Child Welfare’s Pandemic of Fear.  Isolated percentage figures about “skyrocketing” severe child abuse may panic people into calling in false reports, inflicting needless trauma on children (trauma ranging from the investigation itself all the way to needless placement in foster care) increasing the risk of spreading COVID among families and caseworkers alike and diverting resources from finding that one-tenth-of-one-percent of the child population who may be in serious danger.

Using numbers without their full context also risks creating a self-fulfilling prophecy.  With
teachers told over and over that while schools were closed, severe child abuse “skyrocketed,” then once schools reopen, they may see that abuse whether it is there or not.

Spreading this kind of fear is bad everywhere, but it’s worse in Alaska.  Even before the pandemic, year after year after year, Alaska tore apart families at one of the highest rates in the nation.  So the claims about “skyrocketing” child abuse come in a state that already has a hair-trigger for taking children from their homes.

The other reason to view the Alaska figures with caution involves the source.  Knox has devoted her professional life to protecting children from abuse as she sees it.  Her dedication and intentions are not in question.

But when Knox came to Alaska in October, 2019 it was three-and-a-half months after she was placed on paid administrative leave by her previous employer, American Family Children’s Hospital in Madison, Wis., a part of the University of Wisconsin-Madison.  Dr. Knox was head of the hospital’s child protection program. She also was a professor of pediatrics.

According to an in-depth investigative report by Wisconsin Watch, the publication of the nonprofit Wisconsin Center for Investigative Journalism, published on Feb. 29, 2020:

The University of Wisconsin placed her on paid leave in mid-2019 after colleagues inside and outside of the hospital accused her of intimidation or retaliation, an internal letter shows.

Dr. Ellen Wald, chairwoman of the Department of Pediatrics at the UW School of Medicine and Public Health, wrote to Knox on July 5, saying the administrative leave involved concerns about “your workplace behavior, including unprofessional acts that may constitute retaliation against and/or intimidation of internal and external colleagues.” …

UW Health spokesman Tom Russell said the hospital took “appropriate action” after investigating the allegations against Knox but declined to specify what that was.

Surgical scars on [an infant] were listed as bruises. Demonstrably false information was inserted into his medical record. And Knox allegedly misrepresented herself as a specialist in an attempt to convince the family to approve additional medical testing.

Police instantly dismissed the abuse allegation. Child welfare officials would clear the couple after two months. But the episode left [the mother] “petrified” of seeking emergency medical care for their children …

Three days later when the Anchorage Daily News followed up, they reported that already, “dozens of people” had contacted Wisconsin Watch about their own interactions with Knox.

Knox did not respond to requests for comment from Wisconsin Watch.  But when the Anchorage Daily News inquired, her clinic expressed full confidence in her, and released a second “To Whom It May Concern” letter from Dr. Wald, dated October 14, 2019, which was when Knox voluntarily left her Wisconsin job to take the job in Alaska.

The one-paragraph letter said no disciplinary action was taken against Knox.  The letter also said that “The reason she was placed on leave did not relate to dishonesty, clinical skills, medical diagnostic abilities, or incorrect medical diagnoses.”

*-The state association of Child Advocacy Centers says on its website that the centers saw 2,267 children in 2017.  The Anchorage Daily News reports that Dr. Knox’s center alone sees about 1,000 children per year.

Posted by National Coalition for Child Protection Reform at 9:44 AM