In September I wrote a post for this blog wondering if there’s been an epiphany at one of the most regressive forces in American child welfare  -- Chapin Hall at the University of Chicago. I wrote that

For decades, Chapin Hall has been a bastion of 19th Century-style “child saver” ideology and advocacy dressed up as “scholarship.”  You can read some examples of their track record here and here. But Chapin Hall has probably been at its worst concerning the whole issue of race.

What gave me hope was a commentary in The Imprint by Chapin Hall’s executive director Bryan Samuels and also the fact that they’ve apparently withdrawn an “Issue Brief” from 2010 making the case that child welfare practitioners are so wonderful, so pristine in their lack of bias, that it is the one field in America that is immune from racism.

Now there is further reason for encouragement. It comes in the form of a new Issue Brief, published in September, this one about COVID-19 and Child Welfare. The paper lends the gravitas of Chapin Hall, long a “Godsource” for journalists covering child welfare, to debunking the widespread media-fueled myth that with fewer white middle-class “eyes” constantly watching overwhelmingly poor disproportionately nonwhite kids, their parents will unleash upon them a “pandemic of child abuse.”

In doing so, they join the Associated Press, The Marshall Project and Bloomberg CityLab in pointing out the flaws in this racially biased mythology. 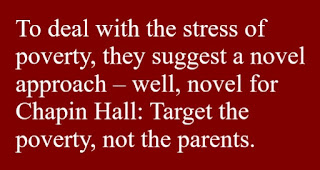 The Issue Brief does not say COVID-19 will do no harm at all.  The stress of increased poverty probably will lead to some increase in child abuse.  But to deal with that they suggest a novel approach – well, novel for Chapin Hall: Target the poverty, not the parents.

In fact, they suggest carving out a large portion of cases, and apparently taking them out of the jurisdiction of child protective services agencies. I say apparently, because they’re a little vague about this. According to the Issue Brief:

Child maltreatment categories should be refined to distinguish and address poverty-related neglect from child endangerment or abuse. … [H]otline reports of “neglect only” may be a phenomenon distinct from child endangerment. While lack of supervision, food, clothing, or shelter can surely jeopardize the safety of children, addressing these directly through concrete supports may be more efficient and effective than initiating a child welfare case that punishes families for living in poverty.

To which the proper scientific response is: Ya think????

Even more interesting is Chapin Hall’s analysis of that whole “pandemic of child abuse” myth, and the related claims that there will be a surge in child abuse discovered as more children return to school, and with that, a surge in the number of children placed in foster care.

The Issue Brief points out that a sharp decline in reports from teachers and other school personnel is not unusual – it happens every summer.  It is not followed by a surge in actual child abuse in the fall.  If anything, these cycles suggest that, overwhelmingly, what’s really “missed” during the summer are false reports.

And no wonder. When teachers are on the job reporting “child abuse” they’re almost always wrong.  Only 11 percent of their reports meet even the incredibly low standard for “substantiating” an allegation – it can be no more than a caseworker’s guess that it’s slightly more likely than not that the abuse or neglect occurred.

Education personnel report the most cases of suspected maltreatment, but detect the smallest percentage of cases that reach the threshold for substantiation … Additionally, historical seasonal fluctuations in reporting that occur in response to school attendance largely affect the rate of unsubstantiated cases. Typical drop-offs in reports relate to concerns that do not reach the threshold of substantiated maltreatment; teacher reports in summer months that do result in substantiation remain steady. This suggests that in the current context, the number of reports that result in substantiated maltreatment is unlikely to fluctuate due to reduced teacher/school contact.

Thus, it is unlikely that the dramatic reduction in hotline reports due to school closures will produce a rebound of substantiated maltreatment. Instead, those concerned with the well-being of children should shift their focus to the community drivers and economic stressors that elevate the risk for child maltreatment. Rather than focusing on how to increase mandatory reporting, efforts should be redirected to support and stabilize families to prevent child maltreatment.

The danger of self-fulfilling prophecy

Unfortunately, there is one factor this doesn’t take into account that may, in fact, make the return to school going on now different: self-fulfilling prophecy.

If you tell teachers over and over again that while their students were out of school, they were abused in pandemic proportions, then the bruise that last year would have been seen for what it was, an accident, suddenly is child abuse.  The hungry child for whom they might have called a food bank now becomes a call to child protective services.

So if there is a surge in foster care placements, it’s more likely to be the result of a generation of journalists who grew up on “health terrorism” – the deliberate distortion of the nature and extent of child abuse by advocacy groups supposedly seeking to “raise awareness” – buying into a fundamentally racist myth about child abuse and COVID-19.

That Chapin Hall has made a modest contribution toward countering this myth is welcome.  But they could do a whole lot more.  As I noted in my previous post about Chapin Hall, in addition to once promoting the myth that there is no racial bias in child welfare, just two years ago they threw gasoline on the fires of foster-care panic in Illinois, contributing to skyrocketing needless removals of children in that state.

They need to apologize, loudly and publicly, for both.

And even now, the current Issue Brief shows an unfortunate, lingering fondness for the latest dangerous fad in child welfare, predictive analytics.

But hey, I said epiphany – not miracle.

Posted by National Coalition for Child Protection Reform at 10:58 PM