A lesson for Illinois child welfare: When history rhymes, families are destroyed – and children keep dying

History doesn’t repeat itself,” it’s been said, “but it rhymes.”  In Illinois, child welfare history is rhyming, and that is bringing down tragedy upon the state’s children in ways old and new.

In 1993, Joseph Wallace, a child ‘known-to-the-system” was murdered by his mother. The casefile had more “red flags” than a Soviet May Day Parade.  There was a rush to condemn any and all efforts to keep families together.  In the foster-care panic that followed the number of children torn from their homes skyrocketed. By 1997, a child was more likely to be trapped in foster care in Illinois than in any other state.  An already bad system was plunged into chaos.  Thousands of children were traumatized when they were taken from parents who were nothing like Joseph’s mother.

All of it was done in the name of ending child abuse deaths. But those deaths increased – probably because workers became even more overloaded, so they had less time to find the relatively few children, like Joseph, in real danger. 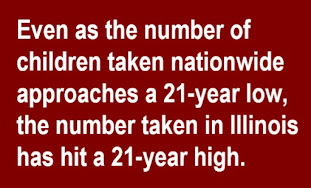 The Illinois Department of Children and Family Services learned from those mistakes. A bold DCFS leader, Jess McDonald, embraced efforts to keep families together.  The number of children taken from their parents went down – and independent court monitors found that child safety improved.  In 2003, the lead monitor told the St. Louis Post-Dispatch that “Children are safer now than they were when the state had far more foster children.” Their 2018 report shows that safety continued to improve all the way through about 2011, when the agency was undermined by budget cuts.

But memories are short. The death of A.J. Freund prompted the same knee-jerk reaction, with the same tragic results.

To understand the consequences think back to the family separations on the Mexican border.  Unlike what happened there, DCFS workers almost always mean well.  But the trauma endured by children separated from everyone they know and love is no different.

That’s because most cases are nothing like the horror stories. Far more common are cases in which family poverty is confused with neglect. Others fall between the extremes.  That helps explain why at least six separate studies, two of them massive in scope and looking specifically at cases from Illinois, have found that, in typical cases, children left in their own homes typically fare better in later life even than comparably-maltreated children placed in foster care.  It’s all coming down hardest on Black children who are in Illinois foster care at triple their rate in the general population.

All that trauma occurs even when the foster home is a good one. The majority are. But study after study has found abuse in one-quarter to one-third of foster homes.  The record of group homes and institutions is even worse.

In one respect history is not rhyming: This time there’s harm to children that’s brand new.  All those additional removals mean more caseworkers inspecting more homes from top to bottom, stripsearching children, walking out with those children, placing them in cars that have transported many others, and sometimes taking the children from place-to-place before finally depositing them with strangers.  In short, this time the foster-care panic also increases the risk of transmitting COVID-19 to children, families and caseworkers themselves.

Some might argue even all that would be worth it if it saved lives. But on that score, history seems to be rhyming again. We can’t be sure yet, since cause-of-death in many cases from FY 2020 is not yet determined.  But it is likely that deaths may have decreased slightly from 2019 – when the number of fatalities was unusually high - but were higher than the three previous years, when removals were much lower.

Once again, a foster-care panic is making all children less safe.

In the 1990s, Illinois proved it could stop a foster-care panic. It can stop it again. But DCFS, the legislature and the governor need to act fact.  Because history is rhyming – but it’s not a nursery rhyme.

Posted by National Coalition for Child Protection Reform at 1:54 PM