How many best practices can a child welfare agency ignore in a single case? 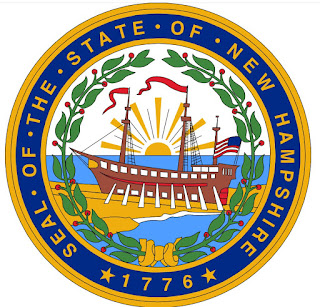 New Hampshire may have set a record – all to be sure a Black couple can’t adopt their grandchildren.

The story in the New Hampshire Union Leader begins this way:

When their three young grandchildren came up for adoption, Clyde and Sandra Lunsford believed they would make the ideal adoptive parents.

They are blood relatives. They are retired professionals with the time and financial resources to raise all three. And they live in the outskirts of Durham, N.C., a racially diverse community they believe would be supportive of their biracial grandchildren.

New Hampshire child protection officials saw it differently. In January, they finalized the adoption of the three siblings by two separate families in the Claremont region, an overwhelmingly White area of New Hampshire.

Much of the story focuses on the issue of transracial adoption and why the state preferred to split the biracial children between two white families, one a relative the other a friend of the relative, instead of placing them in a loving, stable, secure home with their Black grandparents.

But it’s actually even worse. So I’m going to retell the story in order of the blunders by the New Hampshire Division for Children, Youth and Families – an agency which, by the way, tears apart families at one of the highest rates in the nation.

The cascade of blunders

Blunder #1.  The mother lost her parental rights because of drug abuse. Sometimes that’s appropriate, often it is not.  But that’s not the clear blunder. This is:  According to Clyde Lunsford, the grandfather, the father of the children lost his parental rights because he “was living with a roommate and did not have the resources to take care of the three [children].” 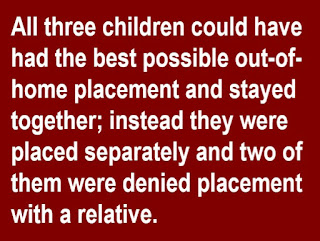 An agency that truly wanted to act in the best interests of the children (and was not racially biased) would have provided the resources instead of terminating the children’s rights to their father (which is what termination of parental rights really means).

Blunder #2: After DCYF contacted the Lunsfords, they said they couldn’t take the three children right that minute because at the time they were living in a one-bedroom home.  An agency that truly wanted to act in the best interests of the children (and was not racially biased) would work with their North Carolina counterparts to help them move to a larger home.

Within just four months, the grandparents said they wanted to adopt – and they moved to a bigger place on their own.

Blunder #3: Best practice in child welfare is to keep siblings together – because of overwhelming research showing sibling connections help cushion the blow for children when they have their parents taken from them.  Instead, DCYF separated the oldest child, age 6, from her twin siblings, age 4, and placed them in separate homes.

Blunder #4: When children really must be taken from their parents, best practice in child welfare is, to place them with relatives because, again, that cushions the blow. Multiple studies have found that kinship care typically is better for children’s well-being, more stable, and safer than what should properly be called stranger care.  But in this case, the oldest child was placed with a relative, an aunt, while the twins were placed with a friend of the aunt.

Notice how blunders 3 and 4 compound each other: All three children could have had the best possible out-of-home placement and stayed together; instead they were placed separately and two of them were denied placement with a relative.

So yes, one does have to ask if DCYF simply dismissed the grandparents because they’re Black.  There doesn’t seem to be any other reason.

What is, in fact, a very good Union Leader story does err on the matter of trans-racial adoption.  The story states that Congress passed a law to “encourage” such placements.  It didn’t. Congress passed a law saying states can’t delay or deny a foster or adoptive placement solely because the foster or adoptive parents are a different race.  It does not express a preference for such placements and, indeed, any such preference would be contrary to research showing that same-race placements typically are better for children. 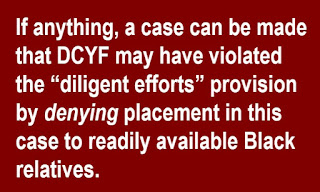 In fact, the same federal law also requires agencies to “diligently recruit a diverse base of foster and adoptive parents to better reflect the racial and ethnic makeup of children in out-of-home care.”

The law was passed based on the idea that a transracial placement was better than no placement at all.  If anything, a case can be made that DCYF may have violated the “diligent efforts” provision by denying placement in this case to readily available Black relatives.

And even if they didn’t violate the law, the well-meaning but nonetheless cringeworthy comments of the white adoptive aunt illustrate why same-race placements are should be preferred.  According to the story:

“Pretty much anywhere in New England is not as diverse as it should be, but they’re not being raised in racist homes,” said [the aunt]. Every night, she tells her daughter that her skin and hair are beautiful, she said.

Well, that fixes everything.

The grandparents call this “by far the worst period of our lives, and it’s just because we’re Black.”

Sure looks that way.

Posted by National Coalition for Child Protection Reform at 2:18 AM