We’re rightly outraged about 545 separated children. But what about the other 424,000?

No matter who does it and no matter why they do it, for the children the trauma is the same.

That is the number of children still separated from their families by the Trump administration — separated deliberately, cruelly and recklessly. They might never be reunited with their parents again. Even if they are, the damage is unimaginable and irreparable.

Even one would be too many. Each one represents a unique tragedy. Imagine being ripped from your parents, or having your child taken from you. Imagine the desperation that the parents feel, the trauma inflicted on their children.

The 545 figure is the one in the headlines recently, because that’s the number of children torn from their families at the Mexican border for whom parents can’t be found despite a court order requiring reunification.  The revelation has put back in the news the barbarity of Trump’s family separation policy at the border, in which children were torn from their parents and, literally, caged. It even was a topic at the final 2020 presidential debate.

But regardless of where it happens, which agency does it and what is their motivation, the trauma inflicted on children is the same.  So the real number we should be talking about it 424,000.* That is the number of children known to be in American foster care on any given day, taken away by American family policing agencies (a.k.a. child protective services).  Almost all of them were torn from their parents involuntarily.  Almost none of them needed to be.

Even that underestimates the extent of the problem. The 424,000 figure is the number on any given day.  More than 250,000 children are taken from their families every year.

No, the situations aren’t identical.  But they are more similar than they are different.

1. Unlike those 545 children and the others separated at the border, authorities know the location of the families of most of the 424,000 children in foster care.  The children sometimes even get to visit their parents, though often only for only an hour or two every week or less in sterile visiting rooms under constant surveillance by caseworkers.  No more than half are actually likely to be returned to their parents someday. But even for many of them, the damage will be, in Marcus’ words “unimaginable and irreparable.” 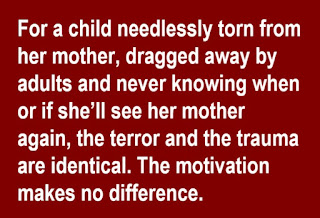 And in 2019, 71,000 of those children had their rights to their parents terminated (that’s what termination of parental rights really means). They had no contact at all.  Some won’t ever see their parents again unless they find them after becoming adults.

2. In a very small number of cases, when CPS workers take away a child there really is no other alternative; it’s genuinely essential to keep children safe.

3. Most of the time, the people who work for and run CPS agencies are not engaging in deliberate, calculated cruelty.  They usually mean well.

But for a child needlessly torn from her mother, dragged away by adults and never knowing when or if she’ll see her mother again, the terror and the trauma are identical. The motivation makes no difference.  Yet we keep right on doing it.  And while the children separated by U.S. “child welfare” agencies - our family police -- usually are not taken cruelly, they are taken deliberately and, often, recklessly.

No wonder the child welfare establishment has tortured logic in its desperate attempts to draw false distinctions between the two kinds of family separation.  I outlined the excuses, and why they don’t hold up, in this column for Youth Today in November, 2018, so I won’t repeat them here.

But I will repeat this:

Even the good intentions can have a downside. They are likely to shield needless removal of children into U.S. foster care system from the kind of intensive scrutiny the Trump family separation policy is likely to get when Democrats take control of the House of Representatives in January [2019].

That, unfortunately, is exactly what has happened.  It’s not just Marcus’ column.

Right after Thursday’s debate, I watched anchors on MSNBC describe being shaken by Trump’s callous remarks about the children his administration separated – and caged – at the border.  They recalled how they cried when they first saw the detention centers in person or heard the audio smuggled out of one of them by ProPublica:

I’m sure most journalists felt the same way.  But now, two years later, many of those same journalists have no trouble buying into the U.S. child welfare establishment’s false, racially biased master narrative about child abuse and COVID-19.

They’ve been pumping out story after story with some variation on this theme:

Now that fewer mostly white middle class professionals have their “eyes” constantly on overwhelmingly poor disproportionately nonwhite children, their parents supposedly will unleash upon their children a “pandemic of child abuse.”  Yes, the pandemic is putting more stress on everyone.  But why do we rush to assume that for poor people in general and poor Black people in particular the only way they’ll cope with it is to beat up their children?

A few major news organizations, notably the Associated Press, The Marshall Project and Bloomberg CityLab debunked the myth.  Yet it continues to spread – encouraging our own “child welfare” agencies to go in, with all their smiles and good intentions, and do to these children what was done to the children at the Mexican border. (Marcus’ paper, The Washington Post, has been among the worst offenders.)

That this myth could spread not only after what happened at the border, but at a time when we’re supposed to be engaged in a reckoning over racial justice is a testament to the power of “health terrorism” – the decades spent deliberately pushing a false narrative suggesting that the horror stories about parents who beat and torture their children are commonplace and all that stands between these sadists and brutes and their innocent children is the equivalent of a “thin blue line” of family police – child protective services workers and mandated reporters. 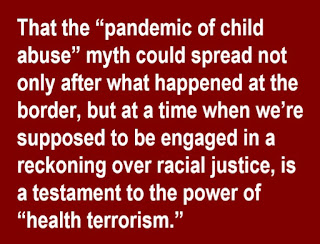 I didn’t make up the phrase “health terrorism.”  I learned it from the group that perfected the art in child welfare – Prevent Child Abuse America.  They don’t do it anymore, but they’ve never apologized, and they’ve made no serious effort to explain to the public, and to a generation of journalists that grew up on this mythology that it is dangerously wrong.

The family police are shielded by something else as well.  I doubt that very many journalists are personal friends with agents of the Border Patrol.  But plenty probably have friends who are social workers and foster parents – they are, after all, mostly the same race and the same class and have similar education levels.  Those caseworkers and foster parents are such nice people.  So what they do couldn’t possibly hurt children, even unintentionally.

That leads us to something that approaches what George Orwell called doublethink: The ability to hold two contradictory beliefs at the same time and believe them both.  We are shocked and outraged at the trauma inflicted on children at the border by Trump, yet we assume that inflicting a nearly identical trauma is necessary to “save” children when it is done by American family policing agencies.

Perhaps the only way to shock us out of this complacency is a vivid reminder that, while most of the time, the people who work for such agencies, do indeed mean well, that’s not always the case.

The video in this story which, be warned is very hard to watch, doesn’t involve the border patrol.  It’s a raid by police and child protective services in Colorado.  The mother’s young child had wandered off in a park and been out of her sight for about one minute - so of course, this supposedly was necessary.

This video from this story isn’t the Border Patrol either. They just needed to get to a child who had a high fever and hadn’t been vaccinated, so they could take away the child and his siblings:

And when a group of people who run around taking away children posed wearing  matching T-shirts that said “professional kidnapper” on one side and “do you know where your children are?” on the other, they weren’t Border Patrol agents.  They were child protective services workers about 280 miles north – in Prescott, Arizona.

So listen again to Ruth Marcus:

Even one [child] would be too many. Each one represents a unique tragedy. Imagine being ripped from your parents, or having your child taken from you. Imagine the desperation that the parents feel, the trauma inflicted on their children.

*-424,000 is the number that U.S. state and local family policing agencies report to the federal government.  Other children are in what Prof. Josh Gupta-Kagan of the University of South Carolina School of Law calls “hidden foster care.”

Posted by National Coalition for Child Protection Reform at 11:01 PM